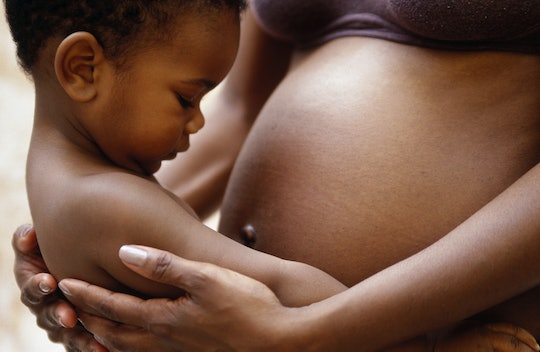 Nurturing Your Children Is A Form Of Resistance

Sometimes I forget that the institution of the family is precisely that: an institution. Like schools and hospitals, families are directly impacted by overarching power structures and systems of oppression. They are capable of reinforcing inequality, or resisting and restoring it. I make an effort in my own home to combat oppression by actively focusing on values like care, inspiration, and empathy in order to prevent the violence that marks the world outside from affecting my family. As a caregiver and, particularly, as a Black mother, I am thankful to be part of a long line of resistors and protestors who did the majority of their direct action at home as opposed to on the streets. My caregiving is part of an intergenerational tradition of resisting violent systems and now, more than ever before in my life, I’m embracing my duties as a protestor on the home front.

The way that caregivers can show up for social movements might look drastically different than the people outside on the front lines but their work is necessary and important nonetheless. It always has been. It is right now. It honestly breaks my heart that I’m not arm-in-arm with my friends and loved ones at the numerous protests in my city. But, I do my best to channel that heartbreak into action so that my mothering is fueled with purpose. I am raising an anti-racist, anti-capitalist, Afro-Latinx child who will grow up in a home that values and emphasizes care as a strength. Care as a tool for change. Care as a form of protest.

From underground supper clubs that kept protestors fed after rallies and demonstrations to Black women who organized soul food kitchens to directly combat food insecurity in chronically disenfranchised neighborhoods, the civil rights movement was nourished and nurtured by caregivers.

Every institution in society perpetuates violence and oppression in some way, even hospitals, schools, and the family itself. The alarming state of Black maternal mortality and the dangerous rise of policing in schools that primarily serve Black and Brown students show that escaping the grasp of violent systems is damn near impossible. Even in our own homes the vast reach of patriarchal and otherwise oppressive systems impacts our daily life. All of these issues are part of a long history of violence that disproportionately impact Black, Brown, and Indigenous people. In response, caregivers throughout history have had to respond to these injustices by envisioning caregiving as an act of revolutionary praxis. From underground supper clubs that kept protestors fed after rallies and demonstrations to Black women who organized soul food kitchens to directly combat food insecurity in chronically disenfranchised neighborhoods, the civil rights movement was nourished and nurtured by caregivers who understood the power of nourishment as a form of resistance. Since then, though, other forms of nourishment and nurturing have become a crucial element of social movements. Whether caregivers are sewing masks for protestors or organizing childcare co-ops to take care of protesters' children, the possibilities are endless when it comes to supporting the cause for social justice.

In the same vein, supporting, nurturing, loving, and caring for children is more than just an act of mothering. It is a way to actively combat violent and oppressive systems by leading with love and centering care in one’s actions. It is a way to change the world by raising activists and disruptors. When we view caregiving, particularly mothering, as a social responsibility and public service we can recognize the different ways that domestic work impacts the public sphere.

Further, it’s just not possible for everyone to be active in the public sphere. Caregivers may find actions like joining a protest, leading a march, using their body as a shield between Black protesters and police, or participating in some form of local demonstration to be unrealistic or inaccessible options. They may be among the 41 million people in the United States who provide care for an elderly or chronically ill family member at home or they may be a stay-at-home parent who, according to a 2018 Pew Research Center report, represents about one out of every five parents. There are, of course, different forms of caregiving that don’t fit into neat and tidy categories but involve work that is necessary and important to people both inside and outside of the home. Caregivers comprise an essential workforce and offer skills and services on which families and communities depend. But right now the work of caregiving needs to be recognized for what it is at its core. We need to embrace the fact that caregiving is more than domestic work. It is more than raising children and caring for people. Caregiving is an act of protest and resistance.

Cultivating a safe space within the home, teaching family members how to care for themselves, and nourishing loved ones with food and support are forms of direct action that subvert violent systems. Organizing child care co-ops with local parents, offering to prepare meals for neighbors, and engaging in online anti-racist work are forms of protest that challenge overarching power structures. Hosting letter-writing campaigns to local representatives in your living room, making care packages for protestors, and greeting your loved ones with open arms when they return home from demonstrations are just a few of many examples of ways to resist oppressive systems. But all it takes is the act of caring to engage in civil disobedience because in a world that doesn’t value care, to ground one’s actions in care is a powerful weapon against systems designed to drain and kill us.

Caregiving has always been about more than physically and emotionally laboring with the intent to improve our loved one’s quality of life. A caregiver’s duties transcend the home and directly impact the world outside. When protesting in the streets isn’t an option, protesting in the kitchen and the living room are important tasks to devote time to. Creating a safe space for people for which to return home is an act of resistance. It is a form of protest. It is necessary. Repairing the world starts within our homes and caregivers must lead the charge!