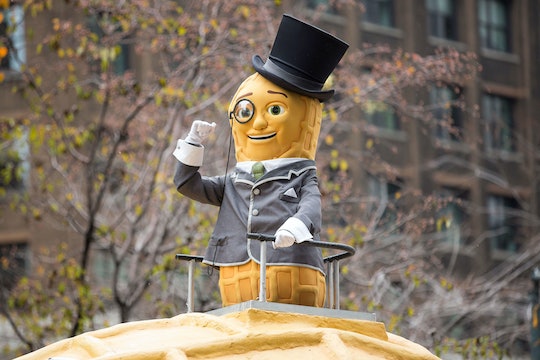 At the age of 104, the longtime Planters mascot has died. But the iconic legume didn't die in a snacking snafu. Rather, Mr. Peanut died in a pre-Super Bowl ad, Planters announced Wednesday. News of Mr. Peanut's death has left the snack world reeling and prompted a number of tributes from major brands, including a "21 dunk salute" from Oreo.

"We're devastated to confirm that Mr. Peanut is gone," a statement shared Wednesday on what was Mr. Peanut's official Twitter account read. "He died doing what he did best — having people's backs when they needed him most." It was later tweeted that Mr. Peanut died "in the ultimate selfless act."

"He sacrificed himself to save his friends when they needed him most."

In a pre-Super Bowl ad shared by Planters on Wednesday, Mr. Peanut can be seen driving the NUTmobile with actors Wesley Snipes and Matt Walsh. When an armadillo steps into the road, the trio must swerve to avoid hitting it, losing control of the NUTmobile. As they careen toward a cliff, the three friends jump from the NUTmobile, clinging desperately to a tree branch. When it becomes apparent that the branch can't support all three of them, Mr. Peanut sacrifices himself, falling into the canyon below.

Tributes for Mr. Peanut rolled in from fellow brand mascots, rival snack brands and even an online travel agency. "Help us give a 21 dunk salute to our nutty and sweet friend," Oreo asked its Twitter followers. Meanwhile, Mr. Clean remembered Mr. Peanut as having been "always classy, always crunchy, always cleaned up nicely" in a tribute shared to the brand's official Twitter.

"Airplane snacking will never be the same," Kayak, the online flight-booking and travel agency, tweeted.

In their own tribute to Mr. Peanut, People for the Ethical Treatment of Animals (PETA) noted the mascot had been "a splendid source of protein to vegans everywhere."

Others on social media, however, were more critical of Mr. Peanut, characterizing him as a capitalist who profited off the suffering of his own kind. "Mr. Peanut is in Hell," one Twitter user wrote. "He spent decades as the smiling face of a company that sold the boiled and roasted corpses of his people as a snack."

As E! News reported, Planters has said it will air the ad of Mr. Peanut's untimely demise during Super Bowl pre-game coverage. Fans of the dapper, monocle-wearing nut will then be able to watch Mr. Peanut's funeral during the third quarter of the Super Bowl. Perhaps while snacking on a bowl of peanuts. (Too soon?)