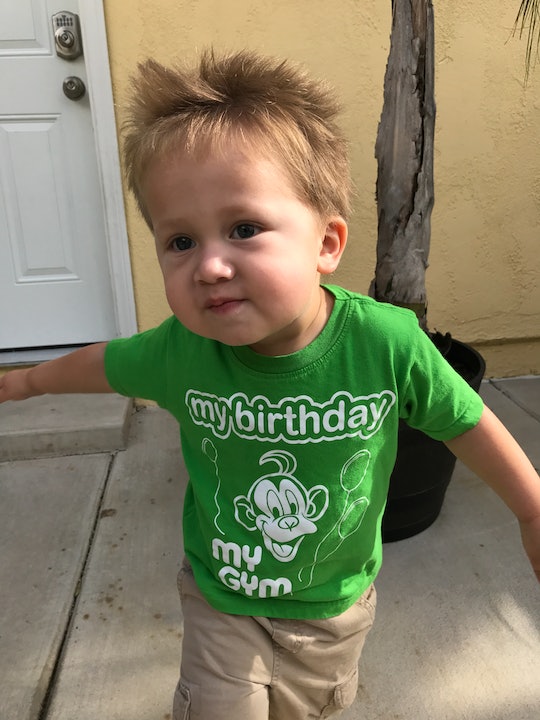 My Son Is The One With Severe Acid Reflux, But It Affects All Of Us

Since he was five weeks old, my son has had severe acid reflux. Tests show he has reflux more than 100 times a day, from his stomach up to his clavicle. He has a hiatal hernia, a condition that results from the stomach pushing up through the diaphragm, which is causing the reflux. Unfortunately, the cause of a hiatal hernia is unknown, but kids like my son are usually born with it.

My son is now a little over 2 years old, and he has been on a variety of cocktails of medications his entire life. He does not sleep well, and he has undergone a variety of medical procedures. He also has a number of developmental delays and sensory issues, which have resulted in him needing speech, occupational, and behavior therapy.

My son might throw up multiple times in one day. He is often in pain, which results in him acting out. He might get triggered by something in the environment, resulting in him feeling overstimulated. Yet despite everything my son has been through, he always has a smile on his face and a hug to give. I have a son with severe acid reflux and special needs and this is what it's like.

My son's reflux was detected when he was about 5 weeks old. After realizing medications were not alleviating the reflux, doctors performed various tests on him to determine why he was continuing to violently vomit. Ultimately, an upper gastrointestinal (GI) endoscopy was performed, after which he was diagnosed with a hiatal hernia. Hiatal hernias can cause vomiting, abdominal pain, and trouble with swallowing. He is having surgery later this month, which will hopefully help to remedy the issue.

My son's doctor has been doing all he can do to help my son with his reflux. I am lucky I have not had the need to advocate for my son in regards to his GI health concerns. However, I’ve had to be my son’s biggest advocate when it comes to his sensory issues. When he is in a calm environment, he behaves quite well. He wants to engage with others. However, when he feels confined or his environment becomes too loud or chaotic, he can become inconsolable by screaming and/or crying for an extended period of time. I have been told by professionals my son is just "being a boy." I know my boy and their answer is a bunch of BS.

I also have a 4-year-old daughter who loves her brother fiercely. My heart melts with every hug and kiss they exchange, or when my daughter teaches my son colors, or when my son lays his head in his sister’s lap. When my son becomes sick or is having a procedure, I see the worry in my daughter’s eyes and how much she wants to protect and take care of her brother.

Despite this love, I know that having a brother with special needs is tough on my daughter. When my son vomits, my daughter automatically gets a garbage bag to place his soiled clothes. She should not feel she has this responsibility, but she does. She becomes sad when we can’t go out to eat as a family because her brother will overstimulate easily. She often talks back and has trouble following directions. My husband and I know her change in behavior is due to her not getting the attention she needs.

My husband and I now make sure our daughter gets one-on-one time with each of us. We take her on outings her brother may not be able to handle. It can be difficult to find the balance between two siblings, let alone one who needs extra TLC. We’re not perfect in achieving this balance, but we try our best to give our kids the attention they deserve.

I often hear about caregivers forgetting to take care of themselves because they are so busy taking care of their kids. I can definitely relate to this. I admit, in the past, I neglected taking care of myself as my son’s medical issues progressed. I wouldn't return friends' phone calls. I wouldn't take space for myself when feeling overwhelmed. My husband would encourage me to do something for myself to be happier, so now, I try to at least go get my nails done every once in a while. But I won’t lie that every day is hard.

Every day, I’d like to press rewind and erase the pain my son is in, or the tantrum he had because of being overstimulated. But when he smiles, I want to press pause and soak in his strength. He is in so much pain, but he amazes me with his courage. I love him more than he'll ever know.