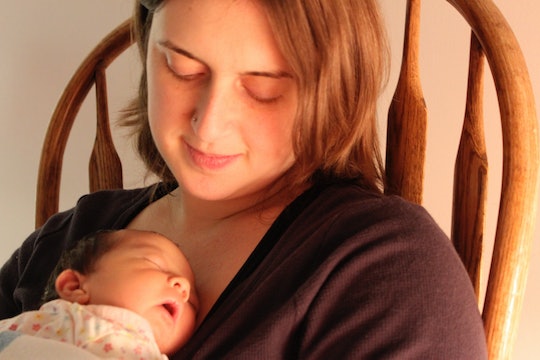 My 20-Week Ultrasound Raised Questions About My Baby's Future

"Did you know before she was born?” is still one of the most common questions I hear from people about my daughter, Esmé, and her disabilities. But the answer to that question — well, it’s complicated. Esmé's genetic disorder was one thing my 20-week ultrasound could not confirm, at least not entirely. Now my daughter is 5-and-half years old, medically fragile, and severely developmentally disabled. She is currently non-verbal, unable to walk, and entirely tube-fed. She has epilepsy, a movement disorder, low muscle tone, and 20 doctors who treat those symptoms and the many others. Esmé is also the most interesting person I know. She is full of surprises. For example, she is totally a superhero and she taught herself to read when she was 4.

"Did you know before she was born?" is such a simple question. But the answer is not. I knew, but also, I didn't. In order to answer that question fully, I have to dig into what we know and don’t know about genetic disorders. And, to be honest, my answer is never comfortable, because it threatens the commonly held idea that modern medicine can tell us what we want to know about the health of unborn fetuses. I often bristle when I'm asked this question, not because of the complexity of the answer, but because the question itself suggests that my daughter is somehow a disappointment. It has the tendency to hold in it a pitying sense that her disability is the most important thing about her. No one — outside of a trusted friend — asks this question without me feeling an underlying assumption that the value of Esmé’s life is somehow less than another child’s.

Frankly, questioning the value of the lives of people with disabilities are so culturally engrained in us that even the Dalai Lama has expressed support for abortion in the case of intellectual disability. So, it can seem like an impossibly uphill battle to explain the ethical complexities behind the assumptions about the value of Esmé’s life.

The cause of my daughter’s significant medical and developmental disabilities is still, strictly speaking, scientifically unclear.

But, that’s not going to keep me from trying, of course.

Esmé is 5-and-half years old, so some of the most current prenatal and genetic testing was not available to me at the time of my pregnancy. Even though I did have access to 4-D ultrasound and other technologies just beginning to become standardized, the non-invasive prenatal genetic blood test to screen for trisomies was not yet available. Additionally, scientific knowledge of genetic medical conditions that effect children has expanded significantly in that time. But I can say with a large degree of certainty that if I were pregnant with Esmé now, rather than six years ago, my daughter’s genetic differences would still not be identified with standard prenatal testing. How do I know this? I know this because the cause of my daughter’s significant medical challenges and developmental disabilities is still, strictly speaking, scientifically unclear.

When I was 13 weeks pregnant I had an optional nuchal translucency scan, or NT scan, in order to look for signs of Down syndrome and major heart abnormalities. I had it, in all honesty, because I wanted to get an extra look at my baby. The idea that anything was “wrong” hadn't seriously crossed my mind. I just assumed I’d have a healthy baby. I was 27 years old and pregnant for the first time. There was no significant family history to concern me about anything but the vaguest of fears. After all, what did I have to worry about?

The NT scan seemed to confirm my assumptions. Everything was all well within the limits. I left the office with the ultrasound pictures proudly clutched in my hands. Later we would display these photos, my husband on his desk at work, me on my Facebook page.

The doctor told us that she’d found three separate anomalies, or soft markers, on the ultrasound.

When the 20-week ultrasound came around, I was similarly unconcerned. I'd felt my baby move for the first time a week earlier, and I saw this ultrasound as little more than a gender reveal. Very early into the scan, after confirming that we were certain we wanted to know the sex of our baby, the ultrasound technician cheerfully announced, “It’s a girl!” My husband and I were so busy celebrating the news and discussing names that it took a few moments to register that the ultrasound technician had grown quiet and serious. She continued her scan in silence as my husband and I exchanged nervous looks.

Next the severe doctor entered the room. She repeated the entire scan with little more than the words, “Let’s have a look,” at the beginning and “Clean yourself up. I’ll see you in my office when you’re dressed,” at the end.

She offered us the option of having our child and putting her up for adoption. She stated that abortion was still an option at this stage. Both of these thoughts seemed completely insane. This was my baby. The baby I’d wanted.

Sitting in her office several stomach-churning minutes later, the doctor told us that she’d found three separate anomalies, or soft markers, on the ultrasound. She said these markers indicated that our fetus — she carefully called it a "fetus" rather than a baby — likely had a genetic disorder, and based on the anomalies she felt it was likely Trisomy 13 or Trisomy 18, which occur when a person has three rather than two copies of the 13 or 18 chromosome, respectively. She explained that if she was right about these conditions, if born, our child would not survive past the first hours, months, or years of her life. She said it was less likely given what she saw, but also possible that our baby had Trisomy 21, or Down syndrome. She offered us the option of having our child and putting her up for adoption. She stated that abortion was still an option at this stage. Both of these thoughts seemed completely insane. This was my baby. The baby I’d wanted.

When the doctor recommended an amniocentesis to check for these major genetic disorders, we consented. An hour later, the testing was done, and we were sent back into a world that seemed to have had all the air and color sucked from it. I remember saying over and over again in the days while we awaited the results, “Well, I just need to know if I am going to prepare to have a baby that is going to die. If we will just keep her comfortable for the short time she is with us, I need to prepare.”

Somehow Esmé's mutations combine to create a condition that exists at the edge of what we know about human genetics in 2016.

A few days later the results from the amniocentesis confirmed that our baby did not have Trisomy 13, 18, or 21, or any other large changes to the number, size, or shape of the chromosomes.

But here is the thing: My daughter did have a genetic condition — in fact she has multiple genetic mutations. Years after her birth, after multiple rounds of genetic testing and cutting edge genetic research, we would learn that she has four teeny-tiny genetic mutations, one letter in her genetic code switched out for another, in four different places, on four different chromosomes. Each mutation is too small to be seen by all but the most precise genetic testing. Precisely how it all works is not clearly understood by genetic science, but somehow Esmé's mutations combine to create a condition that exists at the edge of what we know about human genetics in 2016. Standard prenatal testing could not identify these mutations, although they could be looked for, specifically, if there was cause to do so.

I can never shake the sense that when people ask me, “Did you know?" they are essentially asking me why I didn't have an abortion.

At the time of my pregnancy I felt reassured by the fact that my daughter didn't have these more common and well-known and, in the case of Trisomy 13 or Trisomy 18, extremely life-limiting disorders. However I now feel like I had no idea about what Esmé could still have — the long list of possible genetic disorders ranging from mild to fatal. Intellectually, based on the science I had in hand, I thought my child was going to be healthy. The doctors recommended increased continued monitoring through the remainder of my pregnancy, citing concerns for growth restriction, preterm labor, and other possible complications. In my heart, I knew that this meant my child might be somehow different than I'd expected.

I can never shake the sense that when people ask me, “Did you know?" they are essentially asking me whether I considered an abortion. Yes, I know it isn’t always just that. However, it seems that a lot of people want to know whether I chose to keep my child despite knowing about her disability or whether I didn't know, but wished I had.

Anyone can have a child with a genetic disorder. Also anyone can have a healthy child who winds up having a life-changing injury, or cancer, or diabetes at some point in their life. And if your child doesn’t develop a serious illness, there are countless other things that can pop up and change the vision you had of your child, of parenthood, of life as you know it.

But it taught me an important lesson. It taught me that nothing is promised in life. Not the results of an ultrasound, not our own health, and not the health of our children. Because that is just how life works. And, it taught me that my daughter's disability is absolutely not the most important thing about her.

More Like This
30 Marvelous Baby Boy Names That Start With “M”
53 Rainbow Baby Names Filled With Hope
I’m A Newly Single Mom. How Do I Get Over My Body Insecurity?
23 Sweet Quotes To Dedicate To Your Rainbow Baby