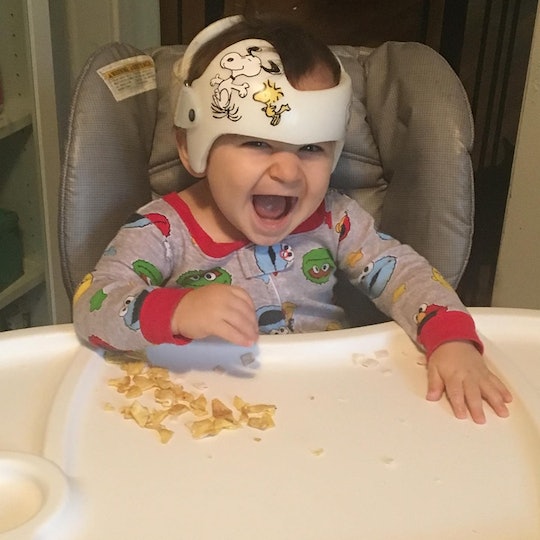 I think my 11-month-old son Jack may have been a viking in a previous life. Or he may even be one now, I’m not sure. But he most definitely acts like a viking when he eats. When he’s hungry and sitting in his high chair, he will ball up his teeny tiny adorable baby fists and beat the table like he has silverware sticking up out of his hands, and grunt little quick grunts as he jerks his head forward. He might as well be saying, “Come on woman, where is my mead?” So of course I grunt back because I’m not going to take sh*t from an 11-month-old — even though he may or may not be a viking. But let’s face it, we all take sh*t from our babies. I think it’s the law or something.

So we go back and forth grunting at each other as I’m making his meal — until Jack becomes the hangry viking. Then it’s no longer a grunt — but a full out roar. And when I finally get the food to him, he does another mighty yell and grunts at me as a thank you (I am assuming). Jack picks up each piece of food in his chubby little fingers and he looks like he’s inspecting each piece before deeming it good enough to go in his mouth. Then the baby viking smiles a knowing smile — the food is acceptable — and as he pops a piece in his mouth he yells, “MMMMMMM,” and then smacks his hands on the table and grunts again.

I think he likes it. Or maybe he’s demanding more since my son is not only like a viking, but also like a cat who thinks they’re out of food when they see the bottom of the bowl despite food being pushed to the sides. When he eats meat, he smacks his lips and tongue so loudly you’d think he was devouring a chicken leg and getting every morsel. Little does he know it’s just diced up grilled chicken — so absolutely not a viking-like meal. But don’t tell him that.

The only time he doesn’t act like a viking while eating is when he’s “eating” his milk and we are cuddling and rocking before nap or bedtime. Now I’ve been exclusively pumping for the entire 11 months he’s been on this Earth. And let me tell you, it f*cking sucks. The being-hooked-up-to-a-machine part, the timing, and the calculations of supplementation of formula I have to do, too — all of it sucks. Part of me is so ready for him to be a viking forever more as he eats his solid foods and solid foods alone.

But even though the pumping on a machine four-to-five times a day is the absolute worst (and really makes you feel like a cow), I’ll miss the quiet moments of just the two of us in his glider and the rest of the world doesn’t matter. Also, I don’t give a shit what anyone says about how we aren't actually bonding since he’s not latched onto my boob. We are bonding, Karen. Trust. And while we are bonding, he's not grunting like a viking, but he’s smiling his special smile at me and making little satisfied coos, and I smile at him while I sing his favorite song. That’s when he is my baby Jack and not the viking Jack. While I love both versions of my baby, and the viking baby makes me laugh and smile, I think I’ll hold onto these non-viking moments as long as I can.