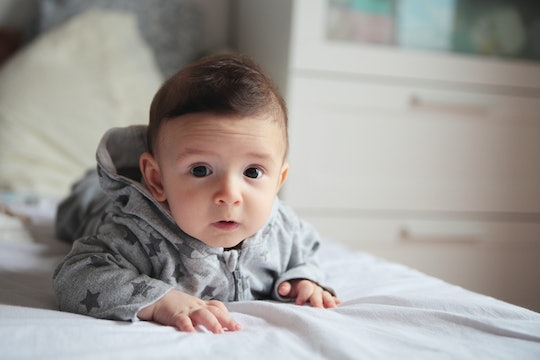 My Baby Rolled Off The Bed, & Every Mom Knows The Special Brand Of Guilt That Followed

On one sleep-deprived morning, seeming content with her little baby piano, I placed my 10-month-old daughter Luna in the center of a king-sized bed while I put away some laundry. I was folding a sweater — must have looked away for only a second — when my baby rolled off the bed. I heard the thump. Luna had managed perhaps six rolls to get to the edge of the bed then fall off, landing face-down and bumping her head on the carpet. My guess would be that our bed is three feet high.

Like most babies, Luna had little mobility for the first six months of her life. She wasn't interested in rolling over, even after she learned how. She napped for three hours at a time in the day, allowing me to carry on with work and routine activities at home in relative tranquility. All I had to do was plop her into a vibrating chair and she'd snooze peacefully to the instrumental version of Over The Sea To Skye.

To be honest, her newfound mobility has been an adjustment. Although she can't yet walk, Luna can crawl backwards and in a circle. She enjoys rolling around, and does so whenever possible until she's too exhausted to hold herself up. She's more active by the day, and, of course, you think your kid isn't capable of rolling, or climbing, or pulling up... until they suddenly are.

Although Luna cried for a few minutes after it happened, her face growing splotchy and red as a small bruise began to form on her forehead, I probably cried harder. I cradled her in my arms, feeling her tears soak into my shirt as my own fell onto her hair. I was inundated with concern, and the remainder of the day was spent checking her pupils to ensure they weren't dilated (a potential sign of brain injury) and making sure she wasn't vomiting (a potential sign of a concussion). This is the reaction of a mother who knows a little about first aid.

It was as though anything good I'd ever done for her — all the sleepless nights, all the milk pumped, all the diapers changed, and the cuddles given — were erased by this one moment.

You will also recognize it as the reaction of a mother inundated with guilt. Although my daughter was fine, and the fall had no consequences except the aforementioned and very temporary bruise, I couldn't stop myself from feeling like a sh*tty mom. It was as though anything good I'd ever done for her — all the sleepless nights, all the milk pumped, all the diapers changed, and the cuddles given — were erased by this one moment. If I couldn't keep her safe, what the hell was I even doing? Protecting her from harm was supposed to be my prime focus now. Not the damned laundry.

Of course, accidents will happen, or so Elvis Costello tells us. I always assumed that something like this would eventually go down. After all, I once knocked my 2-year-old nephew in the head with a solid block while playing catch. My friend fell asleep while her 8 month old played on the couch and woke up to a bang that I imagine sent a similar bolt of electricity through her body.

I used to think I was clumsy, but I now know that I am an Olympian tightrope walker in comparison to my daughter. There's just no way she's not going to get hurt.

I know with every logical fiber of my being that this stuff is normal. No matter how attentive and loyal the parent, no one is ever perfect and kids are rarely predictable. Sh*t happens, and we can't do anything to stop it. To this day, Luna has had three scary falls (no doubt scarier to my partner and I than to her). She's bumped her noggin on everything from headboards to tiled floors to slippery bathtubs. Babies aren't usually graceful in their movements as they become active. I used to think I was clumsy, but I now know that I am an Olympian tightrope walker in comparison to my daughter. There's just no way she's not going to get hurt.

Even so, I felt genuine hate towards myself on the day of this first fall. Looking back, I'm saddened by just how quickly I filled with self-doubt. I'm saddened that I wasn't immune to the pressures to be Supermom; the kind of mom who would never, ever look away, even for just a second. The kind of mom whose kid never cries in her presence.

Parents, and I think mothers in particular, are always under that pressure, and it makes sense. We arguably live in a culture that still conditions women to believe that childrearing is the most important thing they will ever do. The times have changed to a degree, sure, but this messaging is so ingrained that it's going to take time to shift in any concrete way.

I was brutal with myself for days after Luna's fall, replaying the scene over and over in my head.

So when we f*ck up in any way, many of us are quick to sink into guilty-ridden despair and self-loathing. I was brutal with myself for days after Luna's fall, replaying the scene over and over in my head. Why did I choose that moment to tidy? Why didn't I make pillow barriers for her? Hell, why didn't I just put her on the floor for the two minutes it would've taken me to organize some sweaters?

The answers don't really matter, though. I've since spoken to so many parents who've similarly messed up. Parents who have been too human in a world that teaches them to be superhuman, at least when it comes to childcare. What I now know beyond a doubt is that this will happen — at least once. Some of the best mothers and fathers I know have confessed that it's happened to them.

I also know that my daughter is OK. In the 300-plus days she's been in this world, only three of them have been marked by notable accidents. For whatever reason, I'll probably always remember those three. What I'm actively trying to do is to remember the other 297. All the ones when I didn't feel like a failure. All the ones that should remind me that I'm simply not — regardless of any outliers.