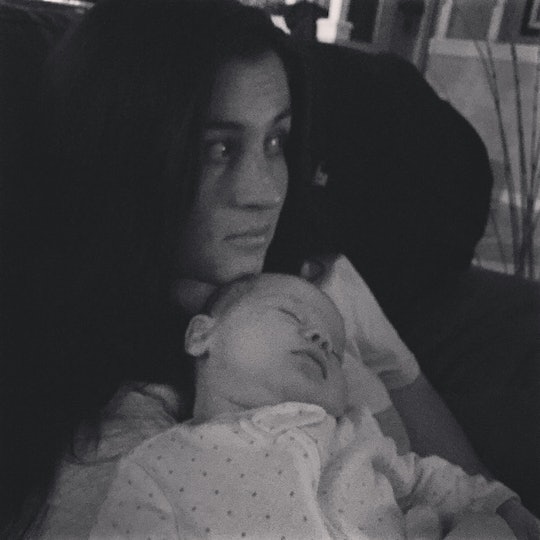 My Baby's 8- To 10-Month Sleep Regression Almost Ruined Me

I remember the first time my child slept through the entire night. He'd just turned 2 months old, and I'd worked diligently for a week to get him on a consistent eat, play, sleep schedule. I reaped the benefits of my hard work as one full night of sleep turned into a week. I'd done it! I thought. I now had the Easy Baby, the one who gave me seven to eight hours of sleep almost every night. It was all bliss... until the eight-to-10 month sleep regression hit. Then, it was hell.

My son is one of those children who hit their milestones right on time. He sat up, stood up, and quite possibly grew the sharpest bottom teeth of all time right on cue. And typically, these changes typically hinder a child's ability to sleep the entire night in the absolute worst way. Have you ever seen those creepy night-camera shots of baby's standing up staring directly into the nanny cam? Yeah, that's the 8-to-10 month sleep regression stare. And that's exactly what my son was headed for. I just didn't realize it at the time. Long before he ever hit any of these milestones, I thought we were in the clear. We'd figured out sleep, I thought. We did it.

I’ll admit that I only knew about the eight-to-10 month sleep regression from watching an episode of Jane the Virgin, where I get most of my knowledge on raising a little person. On the show, Jane was dealing with waking up every hour to rock her little guy back to sleep. Her mother and grandmother insisted that she let her son cry it out, a method that she, much like myself, was not comfortable with. Although my son wasn't waking up every hour on the hour, he was pretty consistently waking in the wee hours of the morning and then staying awake for another two hours. I don't mean to sound naive, but I honestly didn't think we'd have to deal with this. We're beyond this, I couldn't help but think. We've made it through already. And because he'd taken to his prior sleep routines so well before, I was convinced he might lose sleep only for a night or two. But when it started happening every single night, I really thought I was going to lose my mind.

Thanks to my son's all-new sleeping schedule, his day kicked off with a 3 or 4 a.m. wake-up call.

Not only was my 8-month-old son waking up and staying up, but he was often doing so with what I like to call The Scream Cry. Because I work the closing shift at a restaurant most nights, my parents are typically the ones to put my son to bed. That meant that they were the ones who had to deal with my son battling what we like to call The Sleep Monster. My mother was convinced that at one point my son was fighting sleep so relentlessly that he was "speaking in tongues." I'd receive exasperated text updates detailing the truly tireless fight getting my son to sleep had become.

Once I got home, I'd ever so gingerly pick him up from my mom's bed and bring him downstairs to his crib, cursing my dog for clomping along behind me. I typically need to wind down from a night of customer service, so often times I don't get to bed until 1 a.m. or later. But thanks to my son's all-new sleeping schedule, his day kicked off with a 3 or 4 a.m. wake-up call.

I started feeding him bottles when he'd wake up during those early hours. I didn't realize that by feeding him at 4 a.m. I'd created a dependency on the bottle and those extra calories, making him less hungry during the day and even more eager to eat that early in the morning. Suddenly, we were stuck on this crappy cycle. He also wasn’t going to sleep after a feeding. Instead, he'd be up testing out all of his new sitting up skills and flipping around the bed like a little fish for almost two hours while I struggled to keep my eyes open. His daily naps were becoming a struggle too. He'd fight me tooth and nail as I tried to get him down at his usual nap times. I was dealing with an over-tired baby and he was dealing with an over-tired mom. Normally, babies his age are supposed to be getting 13-15 hours of sleep a day, but was getting about nine to 10 hours. I was lucky if I got six hours of sleep.

This was our pattern. Every. Single. Night. I'd personally had regressed from putting him into the crib every time he fell asleep, to now co-sleeping with him like I'd done when he was just an infant. My mood quickly began to deteriorate as well. The lack of sleep left me feeling irritable to the point that I thought I was slipping back into clinical depression. I experienced depression a few years ago, before baby, due to my environment and a chemical reaction to the pill. During all this, my sleep habits were horrendous. I'd be up all night, and somehow still have to manage to wake up at the crack of dawn. I'd typically sleep in the middle of the day and wake up groggy and irritable, only to repeat the cycle several hours later.

Now here I was, with a baby, going through the same thing ridiculous sleep patterns. My son wasn’t the only crabby over-tired baby in the house. My biggest fear since the moment I found out I was pregnant was slipping back into that depression again. I was so unreliable during that period of my life that the thought of being that way again was nothing short of terrifying. And the fear of slipping back into my depression was only made harder by the fact that I had a baby to take care of. I couldn't let this break me. I needed to find a way out — for both of us.

My parents and I needed to put a plan into action. We started by changing up my own sleep habits. If I did get home from work early, I went to sleep right away. And during the day, I took advantage of any and every naps my son would take. I began to up the amount of solid food I was feeding him, as well as attempting a cry-it-out method when it came to bedtime to at least get him tired enough that I could rock or bounce him to sleep. I took advantage of the weekends when my parents were home to get a few extra hours of sleep.

My mom found an article on Parenting.com explaining one woman’s struggle to get her own sleep-resistant baby into a successful sleeping pattern. This mom explained how she turned to Kim West, MD, aka The Sleep Lady, who helped her navigate a nine-day sleep training schedule to get her baby sleeping like an angel every night. Eager, and honestly willing to try anything, my parents and I set out to attempt the nine-day sleep training schedule. Within the first few nights my son was back to sleeping a full 10-12 hours a night and I felt like I had my sanity back.

Thinking back on my son's sleep regression, I remember feeling a tinge of gratefulness. It was a sign he was developing exactly how he was supposed to. But looking back, I also wish I'd had more patience with him throughout this phase. I couldn't help but curse my ex who isn't involved in the day-to-day of my son's life, resenting the fact that he never have to deal with the sleep deprivation. My son is just now learning to sleep through the night again (thank goodness), and I feel that it's important to wear that sleep deprivation as a badge of honor. Of course, it sucked, but I'm putting in the work, and I plan on reaping the reward that come with a well-rested kid.

More Like This
Experts Explain Whether It’s Safe For Your Baby To Sleep On Your Chest
There’s A Reason Your Baby Always Falls Asleep While Breastfeeding
43 Awesome Toys For 18-Month-Olds
Parent's Guide To A Baby's Dry Cough: Why They Happen & How To Treat