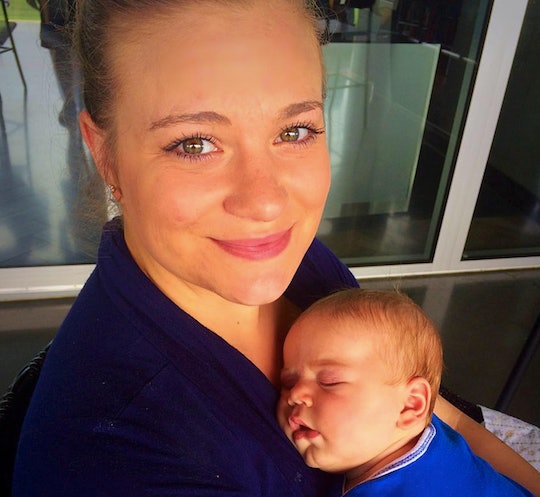 I sat anxiously in the waiting room, praying my baby wouldn’t cry. Taking him out was almost too much for me most days. Even though I knew I was safe in the pediatrician’s office where other young children waited with their parents, I couldn’t deal with another meltdown, another crying fit, especially in public. I kept my eyes down, staring at his car seat, gently rocking him with my foot and hoping no one would notice my unwashed hair, dirty sweatpants or the bags under my eyes. I thought we were there for my baby — I had absolutely no clue that I'd leave my baby's pediatrician's office with a postpartum depression diagnosis.

I was determined to figure out what was bothering my baby, and was so focused on making sure he was happy that I never guessed I’d be the one walking out with the diagnosis. But the day before the baby’s appointment, I’d hit my wall. I’d tried all day to get him to take a nap unsuccessfully, which, unfortunately, was not unusual. The majority of our days consisted of me bouncing and rocking him to sleep, only to have him wake up as soon as I put him down. On this particular day, he was also having one of his typical crying meltdowns that happened once or twice a week. He’d been inconsolable for more than an hour. I went through our normal routine — bouncing, rocking, feeding, walking — but nothing worked. So I called my mom in anger and tears.

"What is wrong with this baby?" I asked her. She seemed just as puzzled as I was. With kindness and concern in her voice she told me she didn’t know, but that I started to get ear infections around that age, and maybe my baby had one too.

“Maybe you should take him in, just in case,” she said.

It was the most bizarre thing I’d ever heard. How do you tend to an infant's needs too much? I was shocked. Depression? No, I didn’t have depression. I just had a difficult baby.

I felt very alone. Like I was the only mother in the world who clearly was not "loving it." Like I was the only mother in the world whose baby was this unhappy. I wondered sometimes, although I never uttered it out loud, if I even loved him. I felt like I was just going through the motions: feeding, burping, changing, putting to sleep, but not really connecting with this little being who depended on me. I didn't even feel connected to myself. Nothing about this experience was anything like I thought it'd be. It wasn't just a hard day here or there, it was a hard everything, all day, everyday, and I didn't know what to do. So I took him to the doctor.

When the nurse called us back and cheerfully asked how I was, I mumbled something about being fine and nervously ran my fingers through my hair. Once in the exam room, she asked about my baby’s symptoms and what had brought us in that day. “Um, well, he has just been really fussy,” I told her in an apologetic tone, wringing my hands in my lap. She told me the doctor would be with us shortly and left the room. When the doctor came in, she placed my son on the exam table and inspected him from head to toe.

Those words should have been a relief, but instead I still felt hopeless. I was yearning for an answer. I needed something to change, something to give, something to guide me. So I broke down in tears while the doctor held my son. "I just don't understand why he cries all the time," I sobbed. "It's been very hard. He won't sleep."

It must have been my tears, or my sullen eyes or the way my voice cracked when I tried to speak, because suddenly my baby's health was no longer the topic of conversation — instead, we were talking about my own.

"Have you talked to your OB?"

After a long, teary conversation with the nurse practitioner, and an official postpartum depression diagnosis, I started to come to terms with the idea that I wasn’t doing so well.

"Look, he's fine," she said. "Look at him. He's perfectly fine. You’re tending to his needs too much." I shook my head. It was the most bizarre thing I’d ever heard. How do you tend to an infant's needs too much? I was shocked. Depression? No, I didn’t have depression. I just had a difficult baby. Was she sure he wasn’t suffering from some kind of medical condition? No one else in my life had even hinted that I may have depression. Our conversation had only been about five-minutes long, how could she be so sure it was me who needed help?

"I'm calling your OB. You are going in to see him today."

I wanted to argue, to tell her I didn’t have time today, but she left the room abruptly and left me no time to respond. When she came back in, she handed me a sticky note — I had an appointment in half hour at my OB’s office. “They rearranged their schedule for you today,” she said. “I told them you absolutely must be seen today.”

I left in a panic. It was midday and my son hadn't napped yet. He wailed in the backseat. When I got home, I called a friend who agreed to come over and watch him. I also called my husband and filled him in our our visit with the pediatrician. I tried to convince him I could face my OB and sort this out on my own, but he came home from work anyway and insisted on going to the doctor with me. After a long, teary conversation with the nurse practitioner, and an official postpartum depression diagnosis, I started to come to terms with the idea that I wasn’t doing so well. The nurse practitioner talked with me about my symptoms and signs of postpartum depression, including anxiety and trouble sleeping, and what my options were for treatment. It would still be weeks before I'd fully accept I was experiencing something more than the baby blues, but that day was the beginning of my journey toward acceptance and healing.

In the months since that day, I've received a lot of help and support. All along I thought something was wrong with my baby and I was experiencing understandable frustration with the challenges of new parenthood, but as I improved, so did my baby, and while I do think there's truth to how difficult those first few months are, I also think my depression made everything darker.

My son’s pediatrician saw me that day with all my flaws, in all my tears, and recognized my cry for help before I recognized it myself. I am grateful for her kindness and insistence that I seek help that very day. I’m not sure how much longer I would've ignored my reality or how much further I would've spiraled if I hadn’t taken my son to the doctor that day.

“You’re a good mom,” she told me at my son’s “checkup” two weeks later, which was actually a checkup for me. My son smiled and cooed at her from the exam table, as I flashed the first true smile I’d had in weeks.