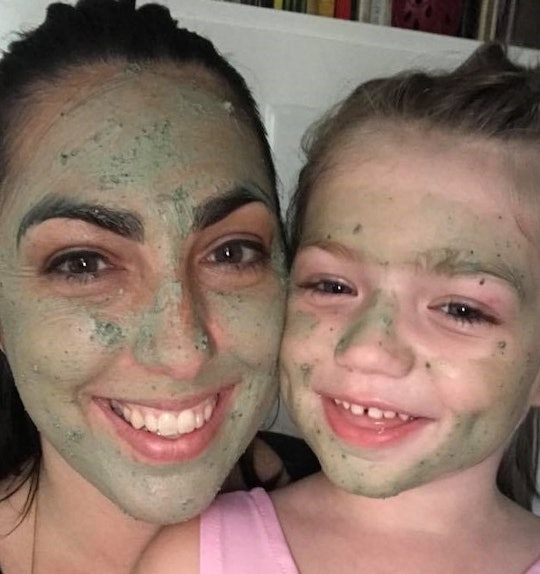 For the past several months, my 5-year-old daughter has been asking for us to own matching dresses. "A mommy dress for you and a daughter dress for me! We can be twinsies!" It's a concept she's been pretty fixated on lately, as she has been conspicuously mimicking me. If I put on makeup, she wants some, too. If I'm wearing ballet flats, she wants to wear ballet flats. It's not always easy to know how to respond to the realization that your daughter wants to be just like you, and I'll admit that, initially, I felt some ambivalence.

On the one hand — the predominant hand — I thought it was adorable and flattering. She wanted to be emulate me! How sweet! Of course I recognized that a lot of this had as much to do with a desire to be more "grown up," and I just happened to be the nearest female adult to serve as a kind of blueprint. But I still saw it as a loving act.

On the other hand I was wary. We've all seen Mommie Dearest, right? Where Joan and Christina present the world with ecstatic smiles and matching dresses when, behind closed doors, it's all "No wire hangers!" The public image was an ode to Joan's narcissism.

While I'm a far cry from Joan, I was a little worried matching outfits would send the wrong message to the outside world. I also wanted to make sure that positive reinforcement of that behavior was never taken in a way that made my daughter believe she had to imitate me in order for me to approve of her.

So I spoke to Dr. Colleen Cullen, Psychiatry Clinical Director at Columbia University Irving Medical Center, to see what was motivating my child to be my mini-me, and whether I should encourage it.

"Generally imitation is not cause for concern and instead can be understood as an important way in which children are beginning to make sense of their environments and learn new, important, and necessary behaviors," Cullen tells Romper. And, as it turns out, this behavior was likely not terribly new and was certainly not a unique quirk of my daughter's. "Imitation is a natural ability that we see in children across cultures and it is evident beginning in infancy," she says.

The same instinct that encourages infants to mimicking their caregivers' facial expression and make babbling sounds eventually evolves into toddlers engaging in more complex imaginative, but familiar, behaviors, like pretending to "go to work" or cook a meal.

Of course, if we learned one thing from Spider-Man (and, indeed, that lovable spidery man has taught us so much) it's that "with great power comes great responsibility."

By observing people around them and engaging in similar behaviors, children learn to engage with the world around them and develop new, important and sometimes fun abilities.

"Caregivers should be mindful to model healthy behaviors for their children and should do their best to limit undesirable behaviors in front of their children," Cullen warns. To be sure, these kids are like adorable little sponges, but not always when we want them to be. For example, it only took one slip up for my oldest to get "Goddamnit!" down pat.

Of course it's unreasonable to hold yourself to a standard or parental perfection (no one lives up to it), but it's still important to remember our role model status. "The old adage of 'do as I say not as I do' does not work particularly well with children," Cullen says, who encourages parents to try to explain to their children when they do lose their temper or behave in a less than role-model-worthy manner. She also reminds parents that emulation isn't something limited to one age group.

"Imitation looks different at different ages," she says. "To some degree, we engage in imitation throughout our lives. Even as adults, we imitate others. ... Young children and adolescents are also very much influenced by the behaviors they observe around them and continue to engage in imitative behaviors in myriad ways."

"Imitation is not just the most sincere form of flattery!" Cullen assures us. "It is also an important way that children learn and are able to practice and eventually master new skills. By observing people around them and engaging in similar behaviors, children learn to engage with the world around them and develop new, important and sometimes fun abilities."

And, I have to admit, while having a matching dress with a 5-year-old "twinsie" may not be developmentally crucial, but it does sound like a lot of fun.

More Like This
The 4 Main Parenting Styles & Which Is Best For Kids
Spread Some Christmas Cheer In Your Child’s Bedroom
20 Stocking Stuffers For Kids Under $20
If Your Kids Love Their Elf, You Don't *Have* To Put Him Away On Christmas