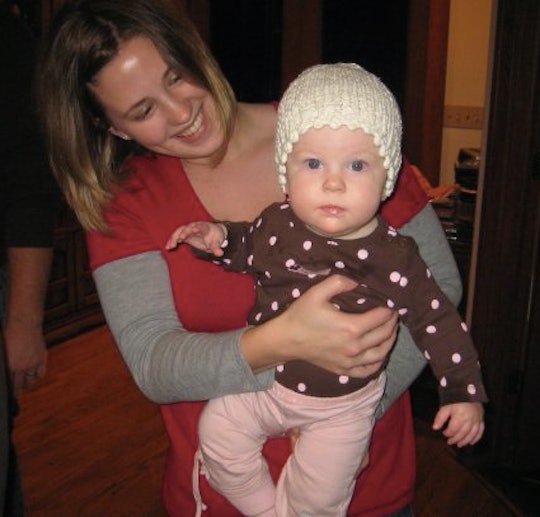 My daughter is turning 8 this week, which seems completely unbelievable to me, but also feels, in a way, like I've made it to some kind of parenting milestone. Something about realizing that come next year, I'll have been parenting for a full decade makes me step back and think, "Wow, I'm actually doing this." And when I think back on my years as a mom, there have been so many highs and lows on the journey that I sometimes can't believe we've made it this far. But the truth is, my entrance into motherhood is really marked by the very first year I spent as a mom. And looking back on that time, I know my first year as a mom was the hardest year of my life. But it was also one of my happiest.

I wish I could say that becoming a mom was perfectly blissful to me, but that wasn't my reality at all. And I've learned that it's OK to talk about that. I certainly don't want my girls to go into motherhood one day thinking that it's all sunshine and roses. Motherhood is different for everyone and it comes with a lot of challenges. For me, it was riddled with difficult moments, but what followed were some of the most incredibly profound and blissful times of my life.

On one hand, I literally spent every second of every day (and a lot of nights) just staring at my baby and holding her. I was the first-time mom who refused to put her baby down and quite frankly, no one in our family was ever able to infiltrate my tight grasp on her. I just didn't want to miss a single second of holding her.

Two days after bringing her home from the hospital I was hospitalized with a kidney infection and I know that being separated from her and not being able to breastfeed her at first (I was on heavy-duty antibiotics) really messed with my mind. Even though I knew my husband and I would probably go on to have more children and that our life's responsibilities would only get harder and busier, I still soaked up every chance I could to just enjoy my baby. The afternoons we spent together, with my baby girl on my chest, are some of the best memories I'll carry with me for the rest of my life. They were a time of such peace and happiness that just can't be replicated.

I was convinced I couldn't even leave my daughter for that, so I made my husband drive me there while they killed time in the parking lot and I took the test. I was so stressed out by the thought that my baby was crying and needed to be fed soon that I flew through each question.

Yet despite our intense moments of happiness together, that first year of motherhood was still one of the hardest of my life. I was lucky enough to naturally adjust to my role as a mother and thankfully never resented having my daughter, but I spent that entire first year in a fog.

It's hard to say if my postpartum depression was something that happened in my brain on a chemical level all on its own or if it stemmed from the fact that in just five months I'd gotten married, gave birth, moved, graduated college, and started my first job as a night-shift nurse on a fast-paced cardiac floor — all while my husband was still in college.

In order to graduate faster, my husband took extra college credits, to the point where he had to get special permission from the dean of students. He took classes, performed his student teaching, and coached on a volunteer basis all in hopes of increasing his chances of getting hired after graduation. That first year, one where we were supposed to figure out how to parent together, I rarely ever saw my husband. And despite his long hours, not one of his jobs or responsibilities brought us any income, so I also carried the full weight of our family's finances on my shoulders.

I wish I could press rewind and give myself a big hug.

And then, either because of the hospitalizations (I was hospitalized again when my daughter was just a weeks' old, this time with mastitis) that messed with my mind or the depression or just because stubborn, I refused a babysitter of any kind. I worked during the day from home as a scheduler and coordinator for a non-profit organization, kissed my baby goodbye as my husband walked into the door, and then headed to the hospital for nightshift. In the mornings, my husband left for school or teaching at 8 a.m, and he'd leave our daughter with his mother, and she'd then bring her back to me at 9 a.m., which gave me enough time to race home, take a quick shower, and set up our "station" on my bed, where she would play or read books while I willed my brain desperately to work long enough to get through everything all over again. I refused to ever have a babysitter because it made me sick to my stomach to even think about leaving my baby with someone else.

I wish, mostly, that I had just been a little kinder to myself.

I was so much in a fog that first year that I insisted that my husband come with me when I took my NCLEX test, which the test that you need to pass to receive your nursing license. It's a huge, big deal and for some reason, I was convinced I couldn't even leave my daughter for that, so I made my husband drive me there while they killed time in the parking lot and I took the test. I was so stressed out by the thought that my baby was crying and needed to be fed soon that I flew through each question. To this day, I don't even know how I passed. I was two-weeks postpartum, and my brain felt like pure mush. After the test, I called my mother in pure desperation, crying and asking her to come over for just an hour so I could take a nap. Everyone else was so busy with their own lives and I was so intent on proving I could be a "good" mom that it took a breakdown before I ever asked for help.

Looking back, I know I did the best I could in those early days, weeks, and months, and I certainly don't want to beat myself up for my mistakes, but I wish I could press rewind and give myself a big hug. I'd tell my husband to force me to get help, to recognize the depression that was engulfing me, and I'd hire a babysitter. I wish, mostly, that I had just been a little kinder to myself. Becoming a mom shakes up everything about your life and the fact that I made it even harder than it needed to be breaks my heart. But then again, maybe that first year was the single most important lesson I needed to learn about motherhood: that it'll always be the most wonderful thing about my life, even when it's also the hardest.