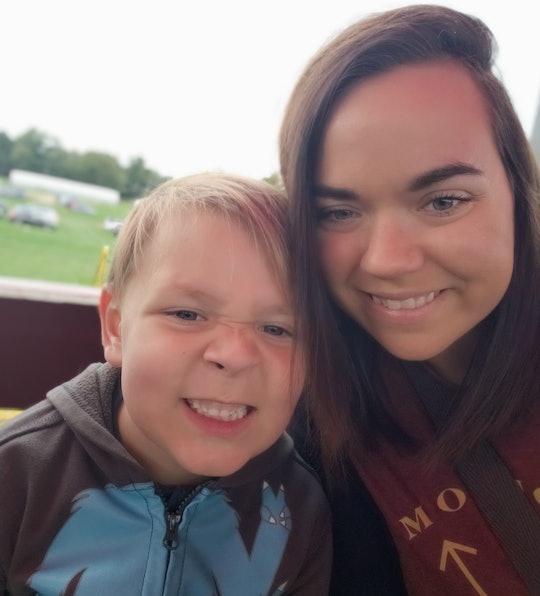 Women’s Wrestling Is Turning My Son Into A Feminist

I don’t know when it started or how it got this far, but my family and I are somehow now a WWE-supporting, pay-per-view watching household. It started with my husband, I think, and snowballed into me looking up from my phone every time I heard something interesting on one of the weekly shows, and eventually our 5-year-old took an interest. Normally, I don't condone violence in the house, but my kid loves WWE now and because of the surprising values it instills in him, I totally support it.

Let me set the tone for the Bobic household here. We’re all about Full House-inspired talks and long group hugs — but I don't even allow Nerf guns! Sure, he can watch all the Goosebumps he wants, but violence? Not so much.

After actually watching WWE wrestling, however, and seeing my son's behavior afterward, I realized how healthy an outlet it’s been for him. And not just because of the physical activity it promotes. WWE wrestling has given my son new role models and heroes to look up to in the form of the growing number of WWE female Superstars wrestlers.

My son’s admiration for the wrestlers, both male and female, began with him watching the likes of John Cena and Roman Reigns. He would watch these athletic and confident men strut to their specific intro songs and be inspired to do the same. And yes, it was adorable. (It’s not so adorable when he surprises me with failed wrestling moves on the fly, but that comes with the territory.)

There are more female wrestlers on the WWE roster right now than I can ever remember there being, so it's not just male wrestlers my son looks up to as personal heroes and role models. He sees that women are just as strong and capable as men are, if not more. As an adult, I can see how empowering it is for young girls and boys alike to see female WWE wrestlers rise to the top. Since he's become a big wrestling fan, my son has also come to admire big names like Ronda Rousey and Nia Jax.

During the recent first ever all-female wrestler pay-per-view event, WWE Evolution, my son cheered on Rousey as she fought to defend her recently won title, and it was a big moment for the two of us. There have been other pay-per-view events in our home, but this is the one I encouraged my son to watch before bed. And because it was wrestling, he, of course, happily obliged. He had a lot of questions about different female wrestlers' names and who had which title belt, but he watched each match with the same enthusiasm and interest as the male wrestler matches that tend to get more attention.

When watching these matches, my son doesn't see a "female wrestler." He sees a top tier athlete to look up to (and maybe, dare I say, to fear), which is kind of the whole point. My husband, bless his heart, could only slightly appreciate how monumental this particular pay-per-view felt for me. I felt powerful as a woman just watching female wrestlers finally get their time and their show. I could feel how important it was and I hoped at the time that my son could feel it, too.

It is so important for me to make sure my son sees men and women as equals. From reminding him that animals or toys don't automatically get the "him" or "he" pronoun, to encouraging him to watch me lift weights and workout, it's an ongoing mission to help my son see women for the strong people they are.

And watching WWE female wrestlers helps my son get that, too. They're shining examples of strength, especially compared to the stereotypically "feminine" image of women that my son is (still) exposed to by the media. Female WWE wrestlers have helped him develop a healthier understanding of what women are really capable of — as opposed to outdated gender roles we can't seem to escape in certain aspects of our every day lives.

Whether my son is trying out a wrestling move he saw on the show from Reigns, or a move he’s sure Rousey has done, he gets so into it that I can hardly say no when he wants to have a wrestling match in the living room, on my recently made bed, or on the trampoline — basically anywhere he can get a solid running start. Because when he asks me earnestly which wrestler I want to portray and that he wants to be Jax this time, my heart melts for his admiration of these strong female role models he now has.

Female wrestlers of the WWE are inadvertently teaching my son how to kick my husband’s ass, but also that strength and power comes in all forms. And frankly, I love that.