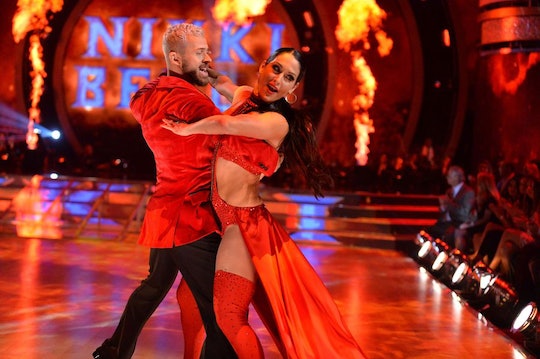 Say what you will about the validity of wrestling and whether or not the wrestling part of the WWE is real (spoiler alert: it’s definitely more entertainment than anything), but all of the wrestling entertainers definitely know how to move around a ring expertly, including WWE Superstar Nikki Bella. And the videos of Nikki Bella wrestling prove the Dancing With the Stars contestant has got some amazing skills, regardless of whether she’s dancing across a ballroom floor or flipping her opponent into submission.

Bella, born Stephanie Nicole Garcia-Colace, has been a WWE Superstar (the "Diva" title is no longer a thing in the company) since she and her twin sister Brie Bella made it on the Diva wrestling roster in 2008. They each later earned a Divas Title reign in 2011 and 2012, proving that together and apart, they’re a force to be reckoned with in the ring. They’ve even co-starred on the reality series Total Divas on E! for the past seven seasons and garnered the spin-off of Total Bellas. But when it comes to Dancing With the Stars, it’s a project that’s all Nikki’s.

And even though it’s sure to show a softer side of the strong and tough WWE athlete, chances are, some of her experience as a wrestler is going to spill out onto the ballroom floor, much like her impressive body slam to pro partner Artem Chigvintsev on the DWTS season premiere.

Before Bella became a WWE Superstar, she first worked as a professional wrestler for FCW (Florida Championship Wrestling), WWE’s lesser known Florida branch of wrestling, so she’s been in the business for a long time. But it’s been in recent years that the star has managed to hit it big as reality star as well, making it possible for her to be asked to compete on Season 25 of DWTS.

And, as Bella admitted on Good Morning America, she isn’t leaving her wrestling roots behind just because she’s trading her wrestling boots for stilettos. "I try to fight [partner Chigvintsev] every rehearsal," she said, of using her wrestling moves while learning new choreography. But as far as actual wrestling goes, the WWE Superstar recently look some time off to not only heal from neck injury surgery, but also likely to focus on wedding plans with fiancé and fellow WWE wrestler John Cena.

And the couple that wrestles together stays together, right? At least for Bella and Cena, it seems like wrestling as a tag team duo has only worked well for them in the past and if she makes her return to WWE wrestling, I wouldn’t rule out some more of that.

One of Bella's signature wrestling moves is her Rack Attack, which essentially looks like she’s breaking her opponent’s back over her shoulders and while she probably isn’t going to be practicing her moves on her partner on DWTS every week, her experience as an athlete in the ring can only help her chances of going far on DWTS this season. But she’s definitely not the only athlete trying to go home with the Mirrorball trophy at the end of it all, since Season 25 also includes former NBA player Derek Fisher, former NFL star Terrell Owens, and former paralympic swimmer Victoria Arlen.

Thanks to the pros of DWTS, even if you basically have two left feet, you’re going to learn a thing or two about expertly moving across a dance floor, so when you’re an athlete who already choreographs your own stunts, you’re going to be able to hold your own and with Bella, that’s likely going to be the case this season.