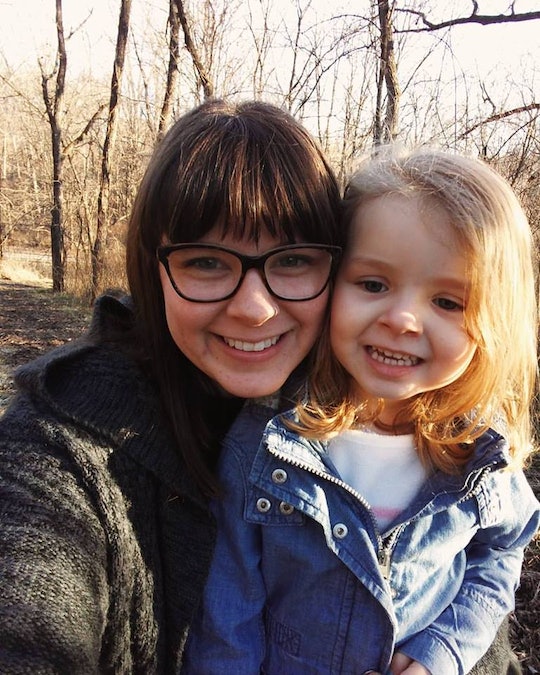 My Lactation Consultant Pushed Me To Formula Feed & It Was Devastating

Five days after the birth of my first daughter, I found myself at the pediatrician’s office desperate for help with breastfeeding. I was there because I thought my lactation consultation would have the answers to troubles I was having getting my daughter to latch. I thought a lactation consultant would be the last person to push formula on me, but wound up leaving the office with samples in hand.

My struggles with breastfeeding my first child resulted from a combination of inexperience and a few unfortunate events. I gave birth on a Friday afternoon and my hospital didn’t have lactation consultants on staff over the weekends, which meant the only breastfeeding advice I got was a delivery nurse clumsily cupping my breast, shoving my nipple into my daughter's mouth, and leaving me to figure out the rest. My daughter also had a strange latch that needed corrected, but this would go unnoticed until I saw the consultant at her pediatrician’s office. Sometimes I wonder what would've happened if we'd started off on the right foot — say, a Monday, perhaps — but when my lactation consultant pushed formula on me, I was devastated.

By the time we reached five days postpartum, I knew I needed some help. I made an appointment with my consultant, but found she was quick to give up on my hopes of exclusively breastfeeding my daughter and I was lacking the confidence to insist on continuing to try.

I remember so distinctly the look on my lactation consultant’s face when she saw the number on the scale. It was total resignation. Then she bent over and retrieved a stack of formula samples from a cabinet and shoved them into my hands.

In the office, they weighed my daughter as soon as we walked in the door. She had dropped enough weight since birth that they were concerned about my ability to produce milk. Next, I was instructed to feed my daughter in the office and then weigh her again to see how much milk had transferred during the feeding. I spent most of those 20 minutes battling to get her to latch and wasn’t surprised at all that she had eaten very little when the time came to weigh her again.

I remember so distinctly the look on my lactation consultant’s face when she saw the number on the scale. It was total resignation. Then she bent over and retrieved a stack of formula samples from a cabinet and shoved them into my hands. I left the office with instructions to supplement after every feeding and to pump for 20 minutes after that. She taught me a trick to teach my daughter to correct her latch, and sent me on my way.

I admit I was frustrated and confused when I left the office. I knew my daughter wasn’t gaining weight, but how could my lactation consultant seem so sure I couldn’t keep up with her needs? Weren’t there other strategies I could try before resigning myself to supplementing with formula after every feeding?

Supplementing with formula started an endless cycle, and soon enough my daughter always wanted the bottle and rarely wanted the breast.

But as a first-time mom without breastfeeding friends in my life, I had very little support or access to breastfeeding knowledge. I felt my only choice was to move forward with my lactation consultant’s instructions and hope my milk supply would increase, allowing me to eventually wean my daughter off of formula.

Instead, I endured a little over six difficult months trying to maintain my supply enough to keep breastfeeding. Supplementing with formula started an endless cycle, and soon enough my daughter always wanted the bottle and rarely wanted the breast. We'd battle it out at the breast for half an hour, and then I'd tearfully resign to myself to giving her a bottle and then pump when she finished eating. I wanted to breastfeed so badly and I felt duped because supplementing was supposed to help me. Only, it wasn't helping.

Although we were able to breastfeed for over six months, it was never without struggle, and it was almost always followed with a bottle of formula. I felt it could have been avoiding if I had known to push back and ask for alternative options when I was pressured to take formula from my lactation consultant. But I didn't.

When my second daughter was born, I felt prepared to do things my own way. She was still slow to gain weight and my milk was slow to come in, but I wasn’t up for another experience like my first. The first time I saw my lactation consultant, my daughter had just surpassed her birth weight, which was slightly slower than my consultant would have liked. I watched as she bent over to pull formula out of the same cabinet as before and firmly said, “No, thank you” when she offered it to me. I insisted on continuing to exclusively breastfeed, at least for a few more weeks to see if something changed. And they did. My daughter continued to gain weight consistently enough to keep my pediatrician happy while my consultant continued to suggest formula supplementation. I felt proud of my ability to advocate for myself this time around.

With my third on the way, I'm not sure I'll be seeing the same consultant I used for my two older daughters. But I do know that this time around I feel even more confident that I can make my own decisions about how I will feed my child without her. And that feels really, really great.