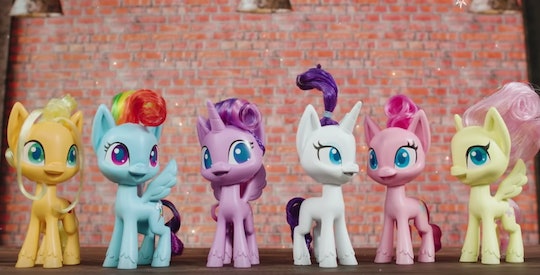 My Little Pony has been a beloved series and toy for the past 30 years. Let's be real, there is so much to love about the fun and colorful talking ponies, who are always embarking on a new adventure. Now a new generation will get to enjoy this, too, because the new My Little Pony: Pony Life animated series is coming to Discovery Family in 2020 with a whole new look.

This isn't the My Little Pony that anyone remembers from the 1980s. This is an all new take on the ponies that will get everyone to fall in love with them again. They've got an updated look and super modern hair styles to bring them in to a new decade. It's official — My Little Pony is entering a brand new chapter with a brand new series headed to Discovery Family Channel called My Little Pony: Pony Life which will air some time in the new year, according to Entertainment Weekly.

My Little Pony: Pony Life will bring the ponies to a bakery hangout, run by Pinky Pie, that "houses a mysterious cache of magical potions to be broken out when the need arises," according to Entertainment Weekly. This ensures that the ponies will be getting in to a lot of hijinks in their everyday "pony life."

If this wasn't reason enough to be excited, the announcement video for My Little Pony: Pony Life is all of the reasons to get pumped for the new series. The teaser video for the series, set to Lizzo's "Good As Hell" shows off the new cast in their doll form looking "good as hell."

Although the video might not tease too much of the new plot line for the new show, it does show what is to come from the ponies' new look and shows what kind of My Little Pony toys that people can expect to see in stores. Let's just say that fans on Facebook are so excited about it.

"I saw the animation and I love it," one commenter wrote. "I would not say that it's better than the original, but it's just as good as the original."

"I think I love them," another commenter added.

The best thing about this new reboot? The toys are already available to purchase on Amazon, which means that any adult, kid, and nostalgia lover can have fun playing with the new character design before the show makes its big debut in 2020.

This is great news, especially considering that the most recent My Little Pony series to air on Discovery Family, My Little Pony: Friendship Is Magic, came to an end in October. The series ran for nine seasons since the premiere episode in 2010, according to The Hollywood Reporter, and people might have understandably been sad to see it go.

But this series isn't the only new thing to come from the beloved animated series. A brand new animated My Little Pony film is slated to hit theaters in about two years on Sept. 24, 2021, according to Deadline. Although the details about the plot and animation style have not yet been announced, My Little Pony: Pony Life might give a good indication of what is to come.