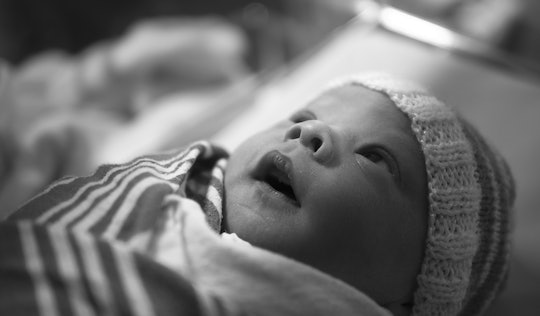 My Midwife Gave Me The Best Advice For Parenting A Newborn

I was one of those ladies who had really always wanted to be a mom, and yet when it came time to really do it, I found myself suddenly terrified. It turns out that desperately wanting to be a parent does not actually automatically make you believe in your own ability to parent. I'd babysat when I was younger, sure, but those were older babies or even young children, and I had no idea how to take care of a newborn. Newborns, as far as I was concerned, were the scary unknown. They were beautiful and mysterious, and also completely helpless, and as my terrible pregnancy wore on, I became more and more positive that I wasn’t up to the task of taking care of one. When I admitted at one of my regularly scheduled prenatal appointments that I was having these kinds of worries, that’s when my midwife, an incredibly no-nonsense woman whom I’ve since developed something of a friendship with, stepped in to give maybe the best piece of advice I’ve ever received for parenting a newborn.

“Newborns are pretty easy,” she said, giving me that serious look that always reassured me that she knew what the hell she was talking about, “the thing about babies is that they increase the difficulty level gradually.” I don’t play many video games, but being a millennial of a certain level of nerdiness, I understand video-game analogies pretty well. I don’t know if that’s exactly what she was trying to say, but that’s definitely how I took it. I grew up playing Super Mario Brothers and Sonic The Hedgehog so I can appreciate that there’s a reason the first couple of levels are always easier and simpler, and then once you get a handle on the controls, the later levels become more and more challenging. It turns out parenting is just like that. Well, it’s less pixelated, but you get the idea.

My midwife sort of shrugged at me, adding, “with newborns, they don’t have complex emotional needs, [so] you’re pretty much dealing with putting in food, and removing poop and pee, and like, keeping them warm and dry. Once you get used to that, your kid will start needing more different things.”

When my kid was born, he was beautiful and amazing, but he was always everything that I feared: a helpless blob of needs with no ability to communicate effectively.

I won’t lie to you and pretend that any of that calmed me down at the time. At the time, I was eight months pregnant, and becoming increasingly nervous with each uncomfortable day. But today, on the other side of a year of parenting, I can honestly say that she was totally right. And I’ve reminded myself of that little tidbit of wisdom more times than I can count. Even though it didn’t do much to give me any ease at the time, it at least made some of the weird turns parenting can take feel a little more expected for me.

When my kid was born, he was beautiful and amazing, but he was always everything that I feared: a helpless blob of needs with no ability to communicate effectively. My wife and I definitely felt like we were in over our heads. We spent the first three days of his life in a hospital room while I recovered from my c-section and we both got a crash course in sleep deprivation, diaper changing, and breastfeeding (I did the breastfeeding, my wife supported me). But then, much to my surprise, we did find our sea legs, and many parenting tasks that felt awkward at first became commonplace and ordinary in our lives. I was weirdly afraid that I would be “no good” at changing diapers, even if that made no sense at all. But when you have a newborn, you change so many diapers every single day that before you know it, you can (and often times do) change even the grossest of diapers while half asleep.

As though that was the cue he was waiting for, our child abruptly let us know that the rules were changing. Suddenly, he required not only regular diaper changes, breastfeeding sessions, and snuggles, but also a new level of mental and emotional engagement.

I had some medical complications after giving birth that made those early weeks a little harder than they might have otherwise been, but before long we’d at least settled into a pattern. My partner and I were looking at each other going “wow, Stacia was right, newborns really are sort of simple!” And, as though that was the cue he was waiting for, our child abruptly let us know that the rules were changing. Suddenly, he required not only regular diaper changes, breastfeeding sessions, and snuggles, but also a new level of mental and emotional engagement. I had to learn how to play with him, and during that same phase he also wouldn’t nap unless I sang to him softly. So when he was alert, I dangled toys for him to swipe at, bicycled his legs while he giggled and cooed, and blew endless raspberries. When he was sleepy, I sang the same three songs over and over again until his tiny eyes finally closed.

The peace of mastering a new developmental stage never seemed to last long, but I comforted myself with the idea that we were “leveling up” at this whole parenting thing. It happened like clockwork: I’d begin to feel comfortable and at ease, start to establish a routine, and then it would feel like a wrench thrown suddenly into the gears of my life. I went through it with the 4-month-old sleep regression, and then again when he suddenly stopped co-sleeping, as well as when he learned how to crawl. His needs and abilities would change suddenly because of all the rapid development going on inside his brain and body, and I’d think, “what fresh hell is this?!” then I'd take a deep breath and go back to the words of our wise midwife.

Caring for babies, it turns out, becomes more complex and difficult gradually. And that can feel totally unfair, like every time you start to figure things out the universe snatches that good feeling away from you. But the fact that babies get harder to care for gradually is also a blessing. It would've been so much harder for me to learn everything at once. Instead, I got to master new parenting skills over time, just as my child is mastering new skills over time.

I’d think, “what fresh hell is this?!” then I'd take a deep breath and go back to the words of our wise midwife.

The first year of a kid’s life (and a parent’s life) is a whirlwind of changes and growth. He weighs over three times what he weighed at birth now, he’s just started to walk, and he’s pretty much learning a new word every day. With all of those changes comes rapidly changing emotional needs. Whereas once a few rattles were plenty of entertainment, now he wants me to read him books. He gets bored of hanging out in our living room, and it's my job to switch things up. Of course I’m overwhelmed many days, but I don’t know a single mom of a 1 year old who isn’t.

But as we — my wife, my kid, and I — bravely enter the toddler years together, as everything changes for the 5,000 time, I circle back to those words: “The thing about babies is that they increase the difficulty level gradually,”and I remind myself that even though it’s really freaking hard, this is the truth that is getting us through it.

More Like This
24 Beautiful Baby Names With The Same Vibe As Mila
18 Baby Names To Use If You Like The Name Evelyn
These Darling Baby Boy Names All Start With The Letter "D"
Advice For Rihanna On Having A Baby In This Country, From One Black Mom To Another