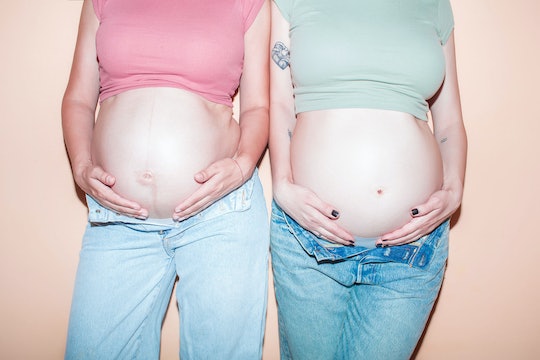 When I was pregnant with my first baby, I was starry eyed and naïve. I felt like I was the only person in the entire world to ever conceive and carry a baby. I wanted pregnancy buddies, but I had none; it was just me and my growing baby.

I talked to my baby incessantly, rubbing my belly even when it was still flat, telling myself that nausea was a good problem to have, that vomiting was a small price to pay, that the aches and pains, the weight gain, the restless legs, the insomnia were all part of the process. I googled every little symptom and reveled in the changes my body was going through. I treasured the weekly emails telling me my baby was growing from a lentil into a plum into an eggplant. I scoured websites and chat rooms created by women who were all due around the same month and read every last comment on every last forum about baby names, baby strollers, breastfeeding, and more. I asked everyone I knew what their experiences had been like and compared them to mine, and I read every pregnancy book I could get my hands on. I soaked all this information up like a sponge, but what I really wanted was companionship.

This time I wasn’t alone: I knew three other people expecting babies within two weeks of my due date, and I was overjoyed by all that connection.

I wanted someone to tell me that she felt exactly the same way I did, that what I was going through was normal, that I was not alone, that everything would be fine, that despite how I felt most days, I would not in fact be pregnant forever, and that my baby would be healthy. But with my first baby, I just had to wait it out.

When I was pregnant with my second child, it was a lot less exciting than the first time; now I was too tired to be overjoyed. I felt resentful about the nausea, cranky about how difficult it was to nurse my toddler, do my job, and just live my life. But this time I wasn’t alone: I knew three other people expecting babies within two weeks of my due date, and I was overjoyed by all that connection.

One of the women was a former classmate of mine. Like me, she already had one child and was over the magic of pregnancy too. We compared notes about never being offered a seat on the subway and explaining to our little ones that the baby in our belly would be their brother or sister someday. Another woman was the daughter of a colleague of mine. This colleague was becoming a grandma for the first time and I think she was even more excited about the baby than her daughter was. Whenever she saw me, she gave me all the latest news in detail: her daughter’s latest symptoms, every ultrasound, their big gender reveal party, where they registered, how they were planning to handle childcare. I felt like I knew her daughter so well that I friended her on Facebook and kept tabs on her pregnancy myself. And the third woman was a first-time-pregnant friend of a friend who connected us because we were neighbors. We got along great and she became a good friend very quickly. Because we lived close to one another, we went for long walks together, waddling around the neighborhood. We did some prenatal yoga together, drank a lot of tea, and talked frankly about our families, our lives, and the grosser things our bodies did in pregnancy.

I felt close to all of these women and appreciated having them to confide in, complain to, and consult with. I fantasized that we’d form our own little September babies club, and that once they were all born we’d meet regularly for coffee or at mama-baby yoga or Music Together classes. As our children grew, I imagined they would all be close, telling everyone in their lives that they’d all been besties since they were in utero. But that’s not how it turned out.

My former classmate went first in mid-September, giving birth to a son in the hospital. I didn’t visit once; the half hour subway ride between her apartment and mine suddenly felt like a major expedition. My full-term belly, my toddler, her newborn and preschooler, plus all the stuff that goes in the diaper bag and under the stroller just to leave the house became too much for both of us, and we soon fell out of touch. A few days after her son was born, my colleague’s daughter gave birth to a daughter. I’d learned from Facebook that both she and her husband were active-duty military, and they got the news shortly after the birth of their baby that they would both be deployed overseas as soon as possible, so my colleague ended up moving across the country to prepare to take over child care.

As her baby grew and learned and met all her milestones and mine did not, it became harder and harder for me to see them.

A week later it was my turn. I delivered at home as planned to what we thought was a healthy baby girl, only to spend the next 14 months evaluating her, testing her, examining her, and ultimately getting a diagnosis that felt like a death sentence. My husband and I circled the wagons after that; we needed to grieve and then pull ourselves and our family together. My tendency is to isolate when I’m in crisis, so I fell out of touch with many people who wanted to help but could not. My newest friend, my walking buddy, went last.

She hung on into October, well past her due date; her baby just did not want to come out. But eventually she had a short labor, an easy delivery, and a beautiful daughter. We kept up our walks, wearing sleeping infants strapped to our chests and even went to a few mama-baby yoga classes together, but as her baby grew and learned and met all her milestones and mine did not, it became harder and harder for me to see them. We did our best to stay in touch for a couple years, but eventually we stopped trying.

My children are 7 and 9 now, and I still wish I had a sisterhood of mamas. I know many people with children around the same ages as my girls, in the same phase of life, juggling the same types of roles and responsibilities, even some dealing with special needs and life-threatening conditions too. But instead of that bringing us all together for the weekly power walks, monthly brunches or the occasional wild and crazy moms’ night out that I’d fantasied about, we are all too busy and too tired. Our kids are not friends; they are in different schools or different grades or different classrooms which feels to a second grader like they are on different sides of the world. If I stand in solidarity with these mothers, the only way I show it is via text or Facebook comment. We are spread out and spread thin. What we have most in common is that connection seems to come last for all of us for one reason or another.

But I’ll take what little there is. I still crave that type of bond, so I text, I post, I comment. To the extent that I can, I keep tabs on my classmate and her two sons, my colleague’s military family, and my exercise pal’s brilliant daughter, and think of them as the cohort my September daughter and I might have had if things had been different.

More Like This
Are Boy Babies Usually Late? Signs Your Baby May Be Born Late
Are You Leaking Amniotic Fluid Or Is It Normal Discharge? Experts Explain
20 Bridgerton-Inspired Baby Names
Rainbow Baby Shower Ideas To Celebrate A Very Special Baby