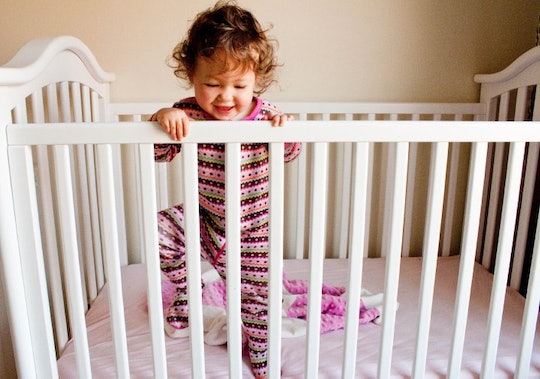 Hours before my contractions started, I wandered lazily around Chicago’s Museum of Contemporary Art exploring an exhibit about torture techniques. One of the most painful tactics, to my surprise, was sleep deprivation. The torturers would blast an alarm every 10 minutes, 24 hours a day, until their subjects would comply. Little did I know that I would soon be experiencing that exact form of torture. For the next year. Sure, I knew that new parents don’t sleep much and should expect to be tired, but I never expected to hallucinate.

I wasn't prepared. I heard the tales, saw the bags under my friend’s eyes. But my first daughter truly didn’t sleep.

She woke up every 20-30 minutes per night every night, demanding milk. Post-milk and a diaper change, she still wouldn’t sleep until she was lulled to sleep by the woefully loud sound of the hairdryer, first on full blast for 10 minutes, then at medium for another seven minutes, then on low for five. Finally, I’d turn off the hairdryer and hold my breath, hoping it did the trick, because if it didn’t, we’d have to start the routine again. If all went well, I’d have 20 to 30 minutes to sleep before her tiny eyelids fluttered open again.

Yes, we did “cry it out.” In fact, I tried every method I read, every method that was whispered to me by well-meaning friends, family and strangers. My child simply would not sleep.

Sleep deprivation is an interesting phenomenon.

According to the National Institutes of Health, symptoms of sleep deprivation include: Falling asleep within five minutes of lying down; and experiencing “microsleeps,” which are small episodes of sleeping while awake. Sleep deprivation affects everything from mood to anxiety, health, and obesity.

My first symptom was irritability. I had expected to be tired, but this was on another level. And the fact that I alone could lull my baby back to sleep, thanks to my breasts, was not making me happy. The primary victim of my irritability was my husband — during that first year, I didn’t like him very much.

But I was more anxious than irritable, if that was possible. I’m not a calm person to begin with, and sleep deprivation washed away the last of my “om.” I knew that I wasn’t getting enough sleep, which was causing migraines, so I was popping meds like candy. Was this good for baby? Who knew. Who cared at that point? I could barely form a sentence, so there was no way I could analyze the effects of my migraine medication on my newborn.

The first time it happened, I was holding Anya in my arms post-middle-of-the-night-nurse, hair dryer running.

I was given horrible advice to “sleep when the baby slept.” That put so much pressure on me. So when exactly should I sleep? During those 20-30 minute breaks through the night? Or during the day, when she fitfully and erratically took her naps? And at what point, may I ask, was I supposed to work, to do the laundry and to do all those other things that normal people who weren’t sleep deprived did, like showering and brushing their teeth?

Needless to say, my anxiety over when and how I could sleep was driving my general anxiety up even higher.

My low point — and there were many, many lows — was at about 3 a.m., when Anya was about 4 months old. I had just finished nursing her and doing the whole hair dryer routine, and I had a full half-hour to sleep in front of me.

But I simply couldn’t fall asleep. I had to, but I just couldn’t do it. The stress of waking every half hour to nurse her, change her and convince her to go to sleep, only to do it all again, made me so crazed, that every little sound she made woke me or convinced me that the routine was about to start.

It was then that I stopped sleeping completely.... and started hallucinating.

He was horrified as he pointed out that I was already in the middle of nursing her. My arms felt heavy at that point, and I realized that he was correct.

The first time it happened, I was holding Anya in my arms post-middle-of-the-night-nurse, hair dryer running. I called out to my husband, letting him know that she was ready for bed (he was better at the final transfer than me, so this was his job).

My husband stared at me. I looked down.

I was cradling an imaginary baby, soothing it with the hair dryer, while my own child slept a few feet away in the bassinet.

It happened again a few nights later, but this time, it was even scarier.

I woke up in the middle of the night and asked my husband to bring me our daughter, as she was crying and I needed to nurse her. He was horrified as he pointed out that I was already in the middle of nursing her. My arms felt heavy at that point, and I realized that he was correct. I was holding her and she was eating. Was I sleeping? When had I grabbed her? What was happening?

Turns out, about 80 percent of people who have long-term sleep deprivation will begin to hallucinate, according to a researcher from the Stanford Center for Sleep Sciences and Medicine. Lack of sleep can also cause other symptoms that are similar to mental illness. A study found that 2 percent of people who were sleep deprived for 112 hours had temporary conditions similar to acute paranoid schizophrenia — a metastudy published in Front Psychiatry concluded that during ongoing sleep deprivation, “psychotic symptoms develop… ending in a condition resembling acute psychosis.” A total of eight hours and 10 minutes sleep is needed to ward off sleep deprivation. I had been sleep deprived for four months at that point. Nothing made sense.

Sleep deprivation is linked to perinatal mood and anxiety disorders, it’s bad for you and your baby, and yet we have “baby-friendly” hospitals doing away with nurseries (those two luxurious nights post-birth when my daughter spend the evenings in the hospital nursery were the last times I slept for an entire year). And we have other parents telling moms that sleep training causes brain damage (studies find that it doesn’t).

If sleeping when the baby sleeps is as impractical for you as it was for me, I urge new parents to splurge on a daytime sitter or someone to help with dishes/laundry/all that other stuff so you can sneak in a guilt-free nap. Do whatever it takes.

My daughter is a tween now. I’m letting you know that sleep will eventually arrive. I have to pull her out of bed at 7 a.m. for school. She gets angry at me for disturbing her slumber. I prefer to think of it as sweet revenge. Oh, and the hallucinations stopped around year 1. When she started to sleep in 4-hour stretches. It was pure bliss.

More Like This
These 4 Sleeping Positions Will Keep You Comfortable After A C-Section
Here's When Your Baby Might Start Sleeping Through The Night For Real
Baby Not Napping At Day Care? These Reasons May Be Why
Should You Be Giving Your Toddler Melatonin To Help Them Sleep?