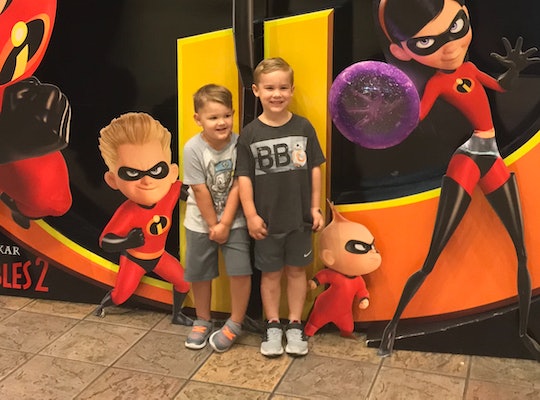 Kids can be awkward. The weird things kids do while learning the ways of the world can even border on embarrassing. From insisting that their invisible friend be served a five-course dinner consisting of only potato products to sniffing farts that their older brother shamelessly lets rip inside of an elevator, kids just engage in some inexplicable behavior sometimes. My own son is no exception.

From the time he was about 2 years old, my youngest child has done something that makes me wince uncomfortably every single time I witness it. My son grabs himself when he's excited. He goes full-on crotch coddling when he sees a cute puppy or when he wakes up on Christmas morning to see a stack of gifts under the tree. It's simultaneously innocent and mortifying.

None of our older kids did this, so I was in a lot of denial when it first became apparent that this habit was one that my son would not soon be breaking.

When it first started happening, I swore over and over again that the giggling and the grabbing were not related. They were simply co-existing actions that just happened to occur concurrently. But for some reason, it kept happening. And eventually, it grew on me. The pure joy I know he's experiencing when I see him leaning over and grabbing with excitement evolved from borderline humiliating to freakishly cute, even if it's semi-alarming to others around us who think he's going to burst from holding in his pee.

Apparently, I'm not the first mom in our family to experience this phenomenon. One of the first times my mother-in-law witnessed my son's precarious posture of exhilaration, she quickly pointed out, much to my husband's chagrin, that her own little boy used to do the exact same thing. Luckily, my husband has outgrown the behavior (thank goodness, because that would be embarrassing) but at 5 years old, our son still hasn't.

"No, he doesn't need to go pee, he's just very excited," is a phrase I find myself saying over and over again to strangers when my son starts jumping up and down holding his hand over his crotch in public. When his brother's team scores a goal at a soccer game, there's my little boy doing what appears to be the pee pee dance on the sidelines.

I remember doing a perplexing internet search a few years ago when I first noticed my son doing this move more and more publicly when overcome with happy emotion. It appeared I really was not alone. Plenty of parenting forums had moms like me questioning this same behavior in their little ones — both boys and girls. As it turns out, a child excitedly clutching themselves is pretty normal.

Maureen Healy, author of The Emotionally Healthy Child and child development expert at Growinghappykids.com, tells me that this display of overt excitement is usually just a phase that kids go through. "As long as he's physically healthy, he simply is expressing his excitement in a way that feels good to him," she says. Because my kid has no idea that this could be conceived as inappropriate, he's just living his best life apparently.

So, if you ever find yourself explaining to strangers at the mall while you wait in line to see the Easter bunny that your child just used the restroom less than 10 minutes ago and no, they really don't have the urge to go again, just know that you're not the only one. My son will be over here probably doing the same wiggly song and dance for the next couple of years.