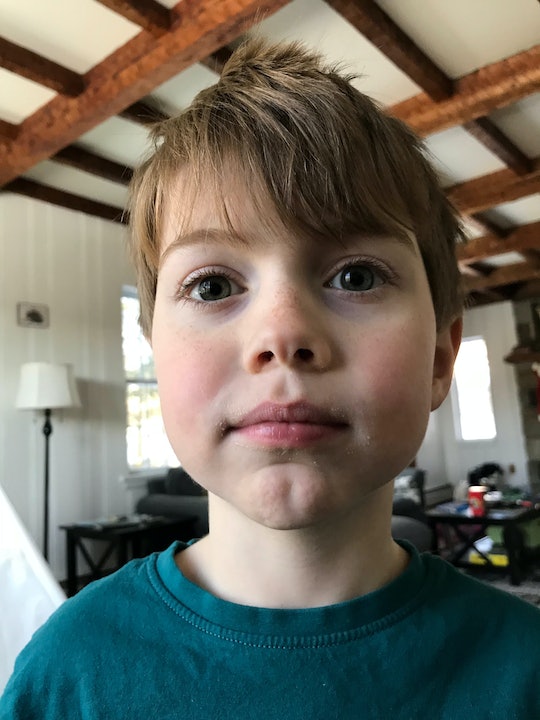 My Son Hates Pink & It's All Your Fault

Well, not you you. I'm pretty sure you, personally, dear reader, didn't single-handedly plot machinations that made my son loathe all things pink. But "you" as in a collective you. "You" as in a large swathe of society (of which you you might be a part). So, in that sense, my son hates pink and it's your fault.

The boy in the picture above is my son, Will. In all the ways that really matter he hasn't changed since the day he was born, which, incidentally, was after a dramatic breaking of water and 18 hours of hard labor followed by an emergency C-section because he refused to come out. He's theatrical and stubborn and sensitive and wonderful. He's an incredible combination of Dorothy from The Wizard of Oz (so innocent, so effusive, so compassionate) and Harry Potter (such bravery, such iron-will, such self-pitying angst). My husband has described him, and I am inclined to agree, as the "platonic ideal of 'little boy.'" He is rough and tumble, energetic, obsessed with Legos and anything with wheels — a "typical" little boy — and he came by it honestly.

My husband and I were both determined that our children should feel comfortable expressing themselves however they felt most comfortable, including things that were stereotypically gendered. We made sure we had a good selection of "girl toys" and "boy toys." Once our son was old enough to choose his own clothing we would walk through the "boy" and "girl" sections. We were mindful of the media he was consuming and tried to show a variety of role models, not just burly, cisgender heterosexual white dudes. And yet, despite his freedom to do and be whatever he chose, he mostly stuck to your standard "little boy" stuff.

There were exceptions, though.

As a young kid, Will loved to have his fingernails and toenails painted, and the more colors the better. He regularly rocked princess dresses, too. Once, when he saw his little sister wearing a tutu he had outgrown, he pouted, arguing "tutus are for big boys." His favorite shows were My Little Pony and all the Tinkerbell movies. But one thing that defined him in his early years was his love of all things pink.

Whenever he could choose the color of something, it would be pink.

"Don't you worry he'll be teased?" we'd be asked by worried adults who would gaze at his pink sneakers the same way they'd look at an irregularly shaped mole. And our answer was: "Not really." Nine times out of 10, other kids didn't give a crap about his sartorial decisions. If they did it went something like this.

"Why do you have pink shoes?"

"Because pink is my favorite color."

I can only recall one time when another kid gave him sh*t, an older kid. When this older child told my son that pink was just for girls, my son put up both his hands and responded, "Whoa. That's your idea."

I beamed. Two years later, it's one of my favorite things he's ever said. He was so simultaneously nonchalant and assertive. I remember thinking "That's right, buddy. That's their idea. You know better."

Time went on and he entered kindergarten, where he did great. He was well-liked and made friends easily. It was just before this time that I started to see a shift in Will, though. When it was time for new shoes he picked a pair of Star Wars sneakers over bright pink ones. He was less interested in having his nails painted. He didn't take out his fabulous Queen Elsa dress as often. He didn't seem to disdain them so much as casually and naturally drift away from them. The only indication I had that his peers were influencing his behavior was the day he said to me, "You know, pink is a girl color. So is purple and turquoise. But... boys can like girls colors and girls and can like boys colors, like blue. It's OK. Everyone can like anything they want."

"That's right," I confirmed. I was a little concerned, but gentle and continued prodding assured me he hadn't been teased or bullied. And, hey, he still had a healthy attitude about being yourself, so I just followed his cues... which tended to lead him away from his "girlier" interests. I had figured that once he got into school he would pick up ideas from other kids that he didn't hear at home, but he seemed to take it in stride.

One morning I put his milk in a pink cup and he pitched a fit.

Then came first grade along with some unsettling developments.

He stopped wearing his pink t-shirts. He would groan when his sister watched My Little Pony. He actively pushed aside his dresses. One morning I put his milk in a pink cup and he pitched a fit.

This wasn't a natural drift. This wasn't indifference. This was disdain for all things feminine.

"Where are you even getting this crap?" I asked. But my expert mom-probing yielded no clear-cut answers. Again, no bullying, no snide comments from friends, and no big traumatic event that would lead him to shun femininity. I was at a loss.

Then, one day, I found him in his room crying. I noticed that, across the room was his stuffed zebra, "Maze." Maze had been a gift from my mother a few years earlier. She had a plush toy for each of my children, a blue penguin and a pink and blue striped zebra. Will picked the zebra, and she'd been a favorite ever since.

"What?" I was perplexed. "You've been friends with Maze a long time. Why can't you play with her anymore."

He looked up at me with a face that will haunt me for the rest of my life, full of hurt and conflict.

Everything his father and I had tried to instill in him, the idea that he could be or like anything he wanted, had come up against something more powerful.

He broke down and began sobbing in my arms, and I just held him, feeling helpless and defeated. Everything his father and I had tried to instill in him, the idea that he could be or like anything he wanted, had come up against something more powerful. The pressure to conform had been too much, and here he was, actively and painfully holding back an aspect of who he was for no apparent reason.

"You know," Will went on. "Once, when I was in kindergarten, some of the boys looked at my nails."

"They did? Were they mean?"

"No. They weren't mean. But they kept trying to look at them. They wanted to see all the colors. I didn't like it."

I felt revelation and shame alike wash over me. Because I hadn't understood until that moment something that should have been so clear from the beginning. Something that was clear from the beginning, really: how pervasive these gender roles are. No one had to bully or tease my son to get him not to like pink or dresses or nail polish. He didn't need to be shunned to stop wearing dresses. No one had to teach him that he was supposed to consider femininity beneath him. This was just the way things were. But unlike a lot of his peers, whose parents, for whatever reason, didn't fight that paradigm, my boy had seen behind the curtain. He knew "there is no such thing as a boy toy or a girl toy" just as intimately as he knew, from everyone else, that Barbies are for girls.

He was torn. I was heartbroken.

"You know, sweetheart," I kissed his head. "Your things are your things. You don't have to stop liking something just because it's pink. You're still you, and you're awesome."

My son hates pink now because he knows he's supposed to hate pink.

By the end of our chat, he was hugging his zebra again, and since then he's been a little less disdainful of dresses and Tinkerbell and his sister's dolls. But he still makes faces if I serve him milk in a pink cup.

My son hates pink now because he knows he's supposed to hate pink. As a smaller child people would see him with his painted nails and princess dresses and talk about how he was experimenting with gender. But, in fact, what he's doing now is a far more extensive gender experiment than anything he did wearing "girl's" clothes. This is the beginning of him being aware of gender, its traditional boundaries, and what that all means for him.

During all this, I kept thinking back to the old adage "You can't fight City Hall." My husband and I knew we were up against something big. Of course this couldn't be a clean victory. But even if you can't fight City Hall (or the Patriarchy), maybe, just maybe, you can undermine it. Maybe the view of gender and the world we present to our son can do something to shake and crack the foundations so that, in time, he can see how shaky it all really is and kick it down... with his pink sneaker.