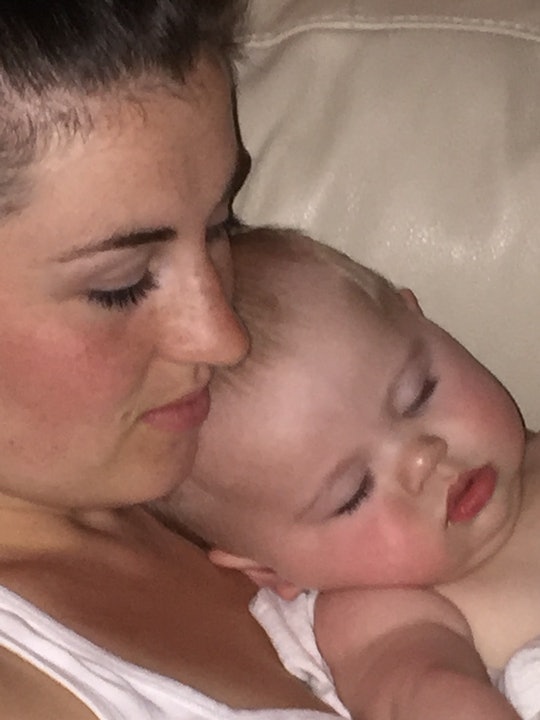 My Son Saved Me From My Abusive Relationship

I used to be one of those people who planned my life out in advance. I knew what I was going to be doing six months from now; I knew what I was going to be doing five years from now. I planned out how I'd get to where I needed to be, whether that was with a job, or in school, or even just how I wanted to dye my hair. I planned everything — until I found myself in an emotionally abusive relationship. It was my first serious relationship and I had no control. I was swept up in the over-intense physical and emotional intimacy. But that loss of control began to transition into a lost of myself in life, and being controlled by someone I was deeply in love with meant losing parts of myself. The pieces of me that I'd once relished in — the fact that I was a planner, that I knew what was coming — they were replaced with a crippling depression and anxiety.

When my ex broke up with me during my third trimester, I began to reflect on the type of partner he was — manipulative, controlling, verbally abusive — and I realized that maybe all of the bad things that had happened in my relationship were not all my fault. When he would come home at 3 a.m., it was me who apologized. When I questioned his loyalty to me after I found out he was seeing someone new while we still lived together, I told him I was sorry. I wish I had known then that, slowly but surely, pieces of me would start to come back. Any sort of end to a relationship is difficult; it hurts to say goodbye to someone. Being dumped, in my opinion, was even worse. My ex chipped away at pieces of me for two-and-half years, and when he dumped me, I was in an emotionally fragile, vulnerable place. I felt empty and worthless — and I was pregnant.

I remember I slept with the television on all night, something I’d never done before, because if I woke up crying every two hours, which I almost always did, at least I didn’t have to do it alone.

Everyone told me that once I gave birth to my son, things would be different and I would feel differently, but I just couldn't see it. I didn't think there was any truth that. I remember I slept with the television on all night, something I’d never done before, because if I woke up crying every two hours, which I almost always did, at least I didn’t have to do it alone.

And then my world did shift. The day I gave birth to my son was the single best, single most important day of my life.

I know that not every single woman who has given birth to their child feels that immediate connection with them, and I don't claim to think that all women should feel that way. But for me, that's the way it worked out. And I knew, especially in that moment, just how lucky I was to look into the eyes of that goopy alien the nurses had just thrown on my chest and know that he was mine. In all honesty, I think that’s when my healing process began.

After giving birth, I started to see how my son’s father didn't show up when he was supposed to, how he didn't keep his promises, and just how increasingly verbally abusive he was toward me even though we weren't in a relationship anymore. The perspective gave me clarity on what our relationship must've looked like while we were together. His jealousy and controlling behaviors weren't done out of love, and his harsh words for me, my friends, and family members were not constructive criticisms — it was verbal and emotional abuse. Understanding this allowed me to step away from residual feelings that lingered for him and to focus on what was most important to me: taking care of my baby boy.

The more time I spend with my son, the more I'm able to step away from my relationship. I now make time for my friends and I've attempted to rekindle the friendships I'd let slide away over the course of the past three years. I lean into my family now and do not take for granted all of the love they've given me. I started working again, which made me feel productive and like myself. I no longer work out for the sake of “getting my body back," but instead to regain strength and energy to keep up with my little boy all day. I read a lot now, in part to understand the situation I'd been in and why my ex did what he did. I read stories about women in situations similar to mine and am proud that each of their stories carried the success of their survivals.

I’m different. I've changed. I am stronger. But I am also softer.

I write now, every single day. I've written hate letters that I never sent and an entire recollection of everything that happened in my relationship from the very beginning to the bitter end. I no longer discount my own feelings about the goings-on in my own life. I count my blessings when I wake up. I know that not everyone is lucky enough to get so much help from their parents, and I express gratitude for that daily. I acknowledge how thankful I am that I get to wake up to a healthy baby boy every morning. I also cry — a lot. I cry when things get tough, because they do. I cry when things are good, because they are. I would've been reprimanded every time I cried while I was with my partner. So when I feel like crying now, I do it. I've learned that it doesn’t make me weak, and it’s a part of how I process my emotions. I know, now better than ever before, that it's OK to cry.

It’s been almost a year since my relationship ended. So much has happened since that time that I find it hard to believe it's only been 12 months. I don’t think I’m back to the person I was before my relationship, but honestly I don’t think I want to be. I’m different. I've changed. I am stronger. But I am also softer. I am OK with taking things day by day. Even though I’m the one in control of my life again, I don’t feel that burning need to plan and attack anymore.