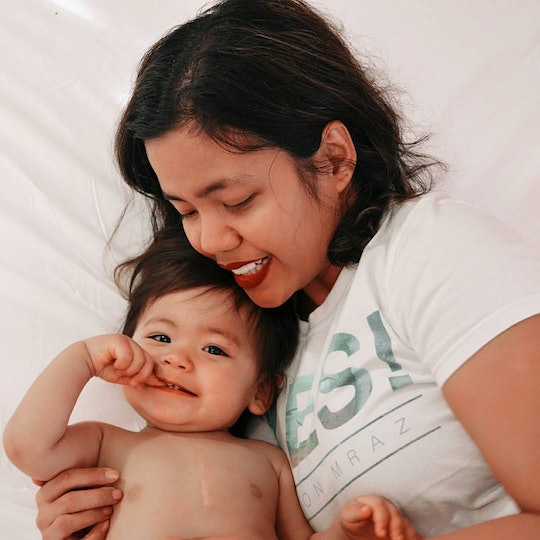 My Son's Heart Surgery Showed Me My Own Strength

Finding out you're pregnant when you're trying to have a baby is pretty much like being given a luxuriously wrapped birthday present 10 months early and being told not to open it until the day of. To cope with the torture of waiting, you imagine all sorts of fun and awesome things to come: the name you'll pick for your baby, the matching outfits you'll both wear, the nursery you'll decorate, all the adorable monthly photoshoots you'll organize to capture the inevitable cuteness, and the overall non-stop joy of holding the tiny human you helped create. The picture your mind paints of your impending parenthood is always a bright one. You almost never take into account the many other things that can happen that can tarnish that. You never picture that there could be something wrong with your baby, that everything might not be the shiny, perfect picture you'd planned it as.

My son Jasper was born with an incredibly rare heart defect, one that we couldn’t possibly have known about in advance. We found out about it two days after his birth, when he was admitted into the NICU after a difficult experience with breastfeeding — he couldn’t eat because he was too busy gasping for air. As it turns out, a part of his heart was somewhere it shouldn’t be, and it was causing him significant problems.

I couldn’t hear anything beyond that. I stared at the drawing in my lap thinking, where did I go wrong? Did I do this? What could I have done to prevent this from happening?

His cardiologist called what he had, “right pulmonary artery arises from the ascending aorta.” The defect was so rare that it didn’t even have a proper name yet. (Later, after we did some research on our own, we found out that only 150 similar cases have been recorded in the last 100 years of modern medicine.) As she explained, the doctor handed us this drawing of a normal heart, next to a crude drawing of what Jasper’s looked like:

The pulmonary artery is a t-shaped artery in charge of carting blood to both lungs from the right ventricle of the heart for oxygenation. In Jasper’s case, only one half of the “T” was in the right place, while the other half was attached to the aorta, which gets blood from the left ventricle, causing one of the lungs to receive already oxygenated blood. It rendered that lung ineffective while causing the other, normally connected one to be overworked and damaged if the defect was left unfixed.

I couldn’t hear anything beyond that. I stared at the drawing in my lap thinking, where did I go wrong? Did I do this? What could I have done to prevent this from happening? Everything went into slow motion until the words “open heart surgery” permeated the air: My son needed to undergo one in order to connect the errant pulmonary artery where it should be.

When I was diagnosed with gestational diabetes at 26 weeks, I was prepared; I watched what I ate and held off from enjoying food that I usually stuffed my face with. When I was told I had to schedule a c-section because my baby would probably be too big to pass through the birth canal without hardship, I was prepared; I mentally and emotionally told myself I wouldn’t be "less" of a mom if I didn’t go into active labor and braced myself for a longer recovery time.

But absolutely nothing prepared me for this.

My partner and I went through a rollercoaster of emotions, which was further amplified by the fact that we were new to this parenting gig and had absolutely no idea yet what to do. Of course we wanted to get the defect fixed as soon as humanly possible — I didn’t even care that I was still recovering from major surgery myself. When they told us they needed to transfer Jasper to a different hospital where specialists were on-hand to do the procedure, I insisted on checking out of the hospital I gave birth at early and that I would be fine to recuperate at home or wherever my baby needed me to be. In my mind, this was my first act in my new title as mom and I had to make it count.

Jasper had his surgery on his fifth day on Earth, aka The Hardest Day of Our Lives As Parents (so far). He had it in a hospital hailed as one of the best in the country when it came to pediatric cardiac surgeries. The team of doctors performing his procedure included one doctor who wrote a scientific paper on the very condition that Jasper suffered from. It definitely felt like a House episode, only one that I hoped included a happy ending.

Every hardship we had to go through during my pregnancy and childbirth made it possible for Jasper’s condition to be spotted early and immediately corrected.

Thankfully despite such a difficult beginning, our brave little warrior was able to pull through.

I can’t help but tear up thinking about the things we had to go through as a family to get to where we are now. The adage, “everything happens for a reason” is quite literal in our case. I had gestational diabetes, which pretty much ensured he would get big and healthy. I didn’t go into active labor before 39 weeks because my baby needed me to cook him fully and help him get stronger. I went through a c-section because it was the safest way for him to enter the world. Had we insisted on a normal vaginal delivery, his defective heart might not have been able to handle the stress of shoulder dystocia (or getting his shoulder stuck, which is a big possibility in gestational diabetes babies), and yes, he could've died... as horrible as that sounds. Every hardship we had to go through during my pregnancy and childbirth made it possible for Jasper’s condition to be spotted early and immediately corrected.

If there’s one other thing my husband and I can thank Jasper’s open heart surgery for — apart from saving his life, obviously — is that it unlocked the super parents dwelling within us both. Jasper has a fever? That’s nothing. A runny nose? Piece of cake. Last month, he had to have a minor procedure to widen the pulmonary artery that was previously reattached, and he sailed through it with flying colors — not that we had any doubt he wouldn't.

One year ago, if you had asked us if we could live through all of this, if we might fall apart, our answer might have been very different. But today on my baby's first birthday, I know we're stronger than ever, that we could weather any storm.