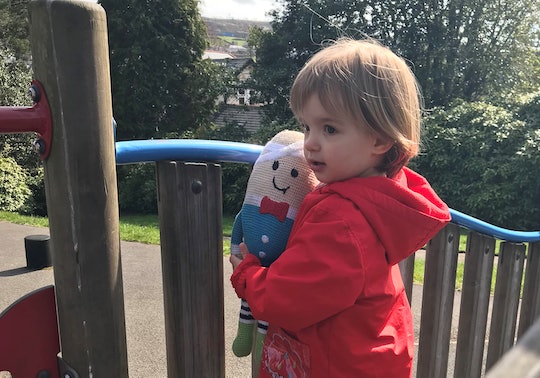 I couldn't tell you when it all began. One day, we were a free(ish) family of four. We enjoyed a variety of toys, wooden and electric alike. We could watch a diverse selection of media. Hey Duggee, Word Party, Frozen, Moana, and Spirit Riding Free were among our favorites. We could go to the park somewhat spontaneously, or drive to the grocery store sans concern. That is, until we became a family of five. My toddler soon grew obsessed with Humpty Dumpty, in his infinite incarnations, and since then, the clumsy, wall-mounting egg has been a quintessential component of our everyday lives.

More Like This
Moms To Toddlers Everywhere: This Aggression Will Not Stand, Man
Vaccinated People Can Ditch Masks. Where Does That Leave Kids?
The 7 Best Water Tables For Your Little Ones
30 Cheap & Easy Summer Activities For Kids

Not a day goes by when our 2-and-a-half-year-old, Luna, doesn't need her Humpty fix. She wants to listen to every version of "Humpty Dumpty Sat On A Wall" on YouTube, in both English and Spanish (the languages we speak at home). She demands that any adult in her vicinity "draw Humpty falling" on the Etch-A-Sketch. Several months back, I made the arguable mistake of fueling her fixations by buying a knitted Humpty Dumpty doll. Wherever we go, he now goes, too. If he doesn't, all manner of chaos ensues.

We don't have the energy to fight Luna each and every time she throws a tantrum because we've dared try to dress her in non-Humpty-related clothes, so now we own a couple of Humpty Dumpty PJs and tops.

Others have similarly contributed to my daughter's Humpty Dumpty enthusiasm. Her GranGran, the hero that she is, spent weeks on end intricately crafting a Humpty Dumpty pattern in order to knit Luna a one-of-a-kind Humpty Dumpty sweater, which is modeled precisely after her Humpty Dumpty doll. The sweater (now her favorite garment of all time) opened Luna's eyes to the possibilities of Humpty Dumpty attire. To be honest, we don't have the energy to fight Luna each and every time she throws a tantrum because we've dared try to dress her in non-Humpty-related clothes, so now we own a couple of Humpty Dumpty PJs and tops. Unsurprisingly, these are the things she chooses to wear when given the option.

In truth, my partner and I do worry sometimes. Humpty isn't necessarily the best role model for a toddler. The story tells us that he climbs a wall, falls off the wall, and usually breaks a significant portion of his body (so much so that no one around him, even trained cavalry, can help ease his wounds). This simple narrative, characterized by poor health and safety regulations, rules his entire existence.

Now, don't get me wrong. I live in the countryside and fully support my kids in learning to climb and traverse stone walls and explore all the physical activities they so desire. I just want them to exercise some care while doing so. I don't want Luna picking up on Humpty's bad climbing habits. I want her to be more than the "Luna Humpty" she fervently proclaims herself to be as she jumps off toy boxes, couches, sidewalks, and mattresses.

We may occasionally grow concerned at Luna's love for, and personification of, Humpty Dumpty. More often than not, however, we can deal.

Then there's the issue of Humpty Dumpty's origin story, of course. Although no one is entirely sure where the legend of the egg began, it's fairly accepted that (before he became a nursery rhyme) "Humpty Dumpty" was the name of a massive cannon used by the Royalists in the English Civil War circa 1648. It was so big, and so heavy, that when it toppled over in battle, none of the king's men or their horses could put the thing back together again.

So, yeah. Being something of a pacifist, I'm not so sure I love the idea of my kid latching onto something inspired directly by wartime.

The thing is, these are but passing thoughts. We may occasionally grow concerned at Luna's love for, and personification of, Humpty Dumpty (particularly that doll, who she is more attached to than any other being in her world). More often than not, however, we can deal. Kids become obsessed with some random sh*t. Sometimes, there's no rhyme or reason to it at all, and you can only be excited by the knowledge that this is their first fandom. You know how hard it can be to know what you even want as an adult? This is pure wanting. My daughter knows what she wants, and it's a big old egg with no neck.

There was a time when Luna adored the extra-large straws I kept in one of the kitchen drawers. She latched onto a plush Hey Duggee replica for several months, too. She was even fascinated by my hair roller as a baby. No toy, garment, or character has been as significant as Humpty has (so far), but ultimately, I'm just kind of glad she has the capacity for such passion.

Humpty may not be the best role model ever, but he does embolden her in ways that bring me joy. With Humpty by her side (whether she's wearing him or holding him in her arms), she fearlessly climbs the jungle gym. She goes down every slide she meets. She sleeps more soundly through the night. She lets me change her diaper without bringing on World War III (provided Humpty gets a diaper change, too). She even eats her dinner when she has her very favorite egg-related entertainment on the screen.

There may come a time when it all has to end, of course. It will probably be Luna who loses interest; putting her many eggs aside in favor of something new. I am already seeing her big eyes widening further at the idea of Dumbo, and the queen bear from Brave, and this book we have that teaches kids all about poop. They widen in the way they first did when she began getting to know Humpty all those months ago. They widen in the way I hope they continue to widen as she grows up — in curiosity, wonderment, and joy over the discovery of something new.