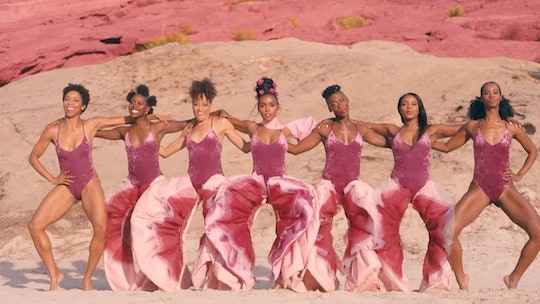 My Vulva Was The Hardest Thing To Love After Pregnancy

Before my daughter was even born, messages around the need to "fix" my body postpartum, to undo the damage, had already begun to sail in from every direction. YouTube videos promised to strengthen my sagging body, Instagram recommended post-baby workout plans, the magazines at my OB's office advertised stretch-mark removal and breast lifts. Even my mother forwarded articles on postpartum recovery. My belly was still growing, but no one talked about the wild transformation my vulva would go through during childbirth.

I wasn't always possessed with love or awe for my vulva. It was a relatively new friend, and a part of me I wasn't prepared to see stretch, swell, and potentially tear during and after childbirth. The outer and inner labia and vaginal opening can all look significantly different after a vaginal delivery, in particular. And though we don't talk about it, accepting those changes can be difficult.

There were more than 12,000 labiaplasty procedures performed in 2016, according to the American Society of Plastic Surgeons. Of 50 women surveyed about their decision to have surgery to reduce their labia tissue, "almost all" reported being self-conscious about the appearance of their labia — over half felt unattractive to their partners.

I took to my lower-hanging belly and its adorning stretchies much faster than I did to my new vulva. While the former felt like signs of the massive achievement I'd accomplished in carrying that baby in my belly, the latter just... didn't. I've since learned that a lot of women report sagging in the labia postpartum (sometimes just on one side, like me), as well as scarring in the vaginal opening should it tear during delivery. Because I wasn't expecting these changes, though, I couldn't help but recoil slightly at the sight of them.

In retrospect, it's difficult to put that discomfort into words. It wasn't that I was equating my womanhood or femininity to my vulva, or to my vulva's proximity to some porn-perfect image of the ideal vulva. Nor was I especially worried about what my partner would think about the changes. He's never really noticed, and I doubt any other romantic or sexual partner would, either.

I suppose I didn't want my vulva to look any different because I had only just come to know it. It was as though I had made a new friend who, almost out of the blue, told me she had to move overseas.

More than anything, it was the shock of this new vulva's sudden appearance that troubled me. After all, I had only been actively fond of my genital region for the last few years, having spent my teens and earlier twenties avoiding looking at it (let alone feeling it up). I grew up surrounded by folks who frowned upon experiencing sexuality outside of marriage, and who largely felt that female sexual pleasure was the most taboo of all varieties of pleasure. My vulva, I believed for a long time, was something private, if not entirely sinful. Something to keep shut away. Even after I became sexually active, I ignored it. I didn't know how to engage with that part of my body because I was still being influenced by the belief that it was a "bad" part of my body.

I began distancing myself from those fears about a year into my relationship with my current partner, who'd grown up surrounded by people who thought sexuality was a valuable and necessary element of our bodies and lives. Something worth exploring. Something worth spending one-on-one time with, in order to better understand. Something worth pursuing and participating in as frequently as desired.

I suppose I didn't want my vulva to look any different because I had only just come to know it. It was as though I had made a new friend who, almost out of the blue, told me she had to move overseas. That the vulva would experience changes after delivering a child should've perhaps been obvious, but the changes I was expecting were more internal. I knew that childbirth could make my vagina drier. I would be sore. My periods could arrive more frequently or sporadically. I even knew that my orgasms could feel totally different from that point forward.

Dare I say it? I may have even been excited to see how this part of my body would react to one of the greatest challenges of its existence.

Of course, I'd also heard some jokes here and there about how many women need an "extra stitch" after labor in order to "repair" some of the widening caused by extracting a giant baby head, but even this felt like commentary about the internal changes my body would undergo. Aesthetic developments like sagging of the outer labia and permanent scar tissue, on the other hand, hadn't even crossed my mind.

I've since come to believe that even if I had grown up in a different environment, and even if I'd known about that potential genital metamorphosis that might happen to me as I went into those 52 hours of hell known as labor, I might've felt exactly the same. Changes to the body are frequently jarring, after all — especially changes that don't necessarily align with what we've been conditioned to think of as "beautiful" or "desirable."

That said, it was perhaps the taboo surrounding vulvas that most resulted in my lack of knowledge about what might happen to mine. They are, for many of us, a private, intimate matter. Not a subject for casual brunch or movie night, but rather one for partners, doctors, and our closest friends. Sometimes not even for those people. Sometimes they're just for us.

Still, I cannot help but think that if they were less taboo, I would've been better prepared for the aftermath of labor. Dare I say it? I may have even been excited to see how this part of my body would react to one of the greatest challenges of its existence.

Ultimately, my new vulva is no different than my new stomach in that it carries the signs of motherhood. When I look at those saggy lips or that saggy belly alike, I know that I should be extending my felicitations. I should be internally (or, hell, externally) shouting "you go girl" for possessing the strength needed not only to carry a kid, and have a kid, but to reshape my life around that kid in order to best serve her. It took me a while, but I might finally be ready to start shouting.