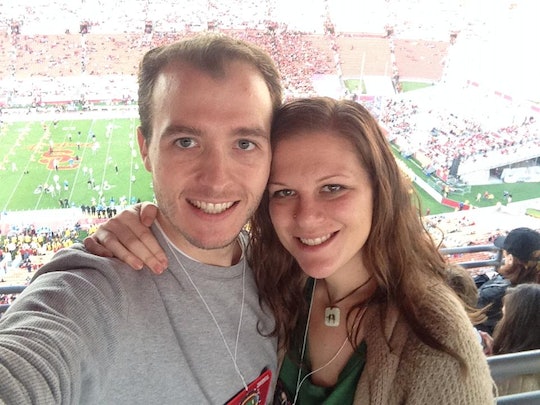 My Wife's Late-Term Abortion Was A Decision We Made Together

It was October of 2013. I was at a college football game with my family when my wife and I felt our son  —  our first child  —  kick for the first time. It happened right as the band played at its loudest, so as soon as we got home we turned on loud music to see if we could get him to kick again. Of course, he did, right on cue. That was a Saturday , and  our 20-week checkup was scheduled for two days later, on Monday. We were especially excited for this appointment because they were going to confirm the baby’s gender, which meant we could start telling our families our baby boy’s name. It meant that, come mid-March, they’d be able to meet Evan. Looking back, we had no clue what was coming. We had no clue that my wife would need a late-term abortion. In that moment, feeling his kicks, everything was perfect.

Days later, as the doctor performed the ultrasound, he took measurements of Evan’s legs, which were perfect, the placement of his kidneys, also perfect, and then his brain, which the doctor kept measuring, again and again. Finally, the doctor told us that one of the measurements on Evan’s brain were a little off and that he wanted a better look. It marked a week of tests and retests, opinions and second opinions. It marked the beginning of the upheaval of our lives.

Every day from that day on out, my wife and I came home from round after round of excruciating appointments, trying with all our might to avoid talking about the possibility of losing our baby. We kept telling ourselves that “we weren’t there yet,” that this couldn’t possibly be happening. Not to us. Not to our baby.

But we were wrong.

After weeks of tests and appointments, our doctors confirmed that Evan had an incredibly rare malignant brain tumor that was preventing his brain from developing properly. We were told the risks of delivering and operating on the tumor early were too high, so if my wife decided to carry Evan to term, he’d need to be rushed into surgery immediately after birth and at best, he’d have a 50-percent chance of surviving the procedure. The worst news was still to come : Even if Evan survived the surgery, the best-case scenario was that he'd technically be alive, but he'd have no brain function. He wouldn't ever see, hear, talk, or smile.

The constant theme I noticed about parenting is that it’s about making choices , and  that becoming a parent means assuming the responsibility to make choices for another person so you can give them the best life possible. The only choice my wife and I got to make for Evan meant that we would never get to meet him.

The diagnosis was devastating. All of the times we’d told ourselves “we weren’t there yet” came crashing down in front of us. We were there. And I felt hopeless. Our son was sick and there was nothing we could do to make him better. Our son was never going to be happy or sad or excited or upset, and there was nothing we could do about it. We were basically a tent in the weeks that followed — only standing because we were leaning on each other.

In the weeks and months that followed, as we saw friends and relatives raising nieces and nephews, the constant theme I noticed about parenting is that it’s about making choices , and  that becoming a parent means assuming the responsibility to make choices for another person so you can give them the best life possible. The only choice my wife and I got to make for Evan meant that we would never get to meet him. Though the heart-wrenching circumstances of Evan’s tumor made the choice clear to both my wife and me, it wasn’t easy. We talked about the limited and terrible options we had in front of us, we cried, we leaned on support from each other, and we decided to have a late-term abortion out of love for our son and because we didn’t want to bring him in the world only to suffer. The only metric we used when making the decision was the same universal motivation that drives a parent's decision-making process: What's best for our child?

I did my best to not only show the emotional support my wife needed, but to take care of the logistics: driving to and from the doctor’s office, the forms, the documents, and the post-procedure care my wife required, which our family thankfully helped coordinate. It was an excruciating experience, but I never once felt like it was the wrong choice.

We consulted with our doctor, talked with our friends and families, and at nearly 22 weeks into her pregnancy, my wife had a late-term abortion.

The procedure was a three-day process, and each day that we went to the doctor’s office was an emotional abyss. My brain, which had for so long battled to avoid the worst-case, nightmare scenarios, was now living in one, and it felt like the pessimistic floodgates were open. In addition to figuring out how to say goodbye to a son I’d never meet, and only just started feeling kick in the womb, I was also terrified that something would go wrong in the procedure and that my wife’s health would be threatened, or that we’d never be able to have a child. At the same time, I did my best to not only show the emotional support my wife needed, but to take care of the logistics: driving to and from the doctor’s office, the forms, the documents, and the post-procedure care my wife required, which our family thankfully helped coordinate. It was an excruciating experience, but I never once felt like it was the wrong choice. I wish that certainty helped ease the grief, but it didn’t.

The pain I felt in the aftermath of my wife's procedure was different than anything I could have anticipated. I felt an unbearable longing for someone I’ll never meet and an infinite absence in our lives, one based only on my expectations, hopes, and dreams. I’ll never hold Evan. I’ll never hear him cry or laugh. I’ll never get to teach him things and watch him grow. Three years later, that haunting longing hasn’t gone away, and even though my wife and I welcomed a healthy son to the world years later, I don’t think the pain from Evan’s death will ever completely disappear. But we’ve decided that we wanted to do something with it. We felt the only way Evan’s life could help other people, and he could leave an impact on the world, was if we used his story to help other people better understand the heart-aching honesty of what lead to our decision.

According to the Guttmacher Institute, an estimated 30 percent of women will have an abortion by the age of 45, but only a tiny fraction (1 percent, according to the Guttmacher Institute) of women will have a late-term abortion. Tragically, the unknown and often unshared stories of the circumstances leading to late-term abortions have allowed people who oppose any kind of reproductive rights to believe that late-term abortions are a common and callous massacre. At the third and final presidential debate, Republican presidential nominee Donald Trump said that women have their babies “ripped” from the womb “just before birth” in late-term abortions. His repeated claim was not only a cruel misrepresentation of the procedure, but it completely ignored the pain my wife and I, and other families like ours, have lived through.

Trump’s horrific comments helped me realize how infrequently men talk about late-term abortions, if at all. And when they do, they tend to not talk about what a late-term abortion really is. When Trump repeatedly described late-term abortions in the most grotesque and inaccurate terms, he demonized me, my wife, and the many other fathers, mothers, and non-birth parents who have lived through what we have, and who have made the most difficult choice possible for the safety of their children. In fact, Trump's heartless demonstration of ignorance is why I wrote this.

Though I could never have a late-term abortion, I was still part of a decision to terminate a pregnancy more than 20 weeks into it. I chose to write this post because brave women, including my wife, have been speaking up about their late-term abortions, revealing the most intensely personal and heartbreaking experience they’ve had, and I want them to know they’re not alone. I chose to write this so the stigma and demonization callous politicians place on our choice will not firm like cement and shape policies for generations to come. But I also wrote this posts for non-birth parents who deserve to know they’re not alone in their unique grief, either.

I have always been politically progressive and active and have never questioned a woman’s right to choose what to do with her body. This experience has only reaffirmed my opinion.

It is a very odd thing to feel lucky to have been a part of making such a terrible and tragic decision, but as I sat in the doctor’s office during the three-day procedure, I remember realizing that the decision my wife and I had made was only possible because we lived in a progressive state like California, and because so many women and men had fought for reproductive rights. Had we lived in one of 26 states that either restricts or outright bans late-term abortions, we would have not been able to make the decision. That intensely personal and heartbreaking choice would have been ripped away from us, and would've likely been made by a politician we'd never meet, one who'd never care about what was best for our family.

If I've learned anything, it's that being a parent is all about making the best for your child. We made ours. And that, we believe, is something worth defending.