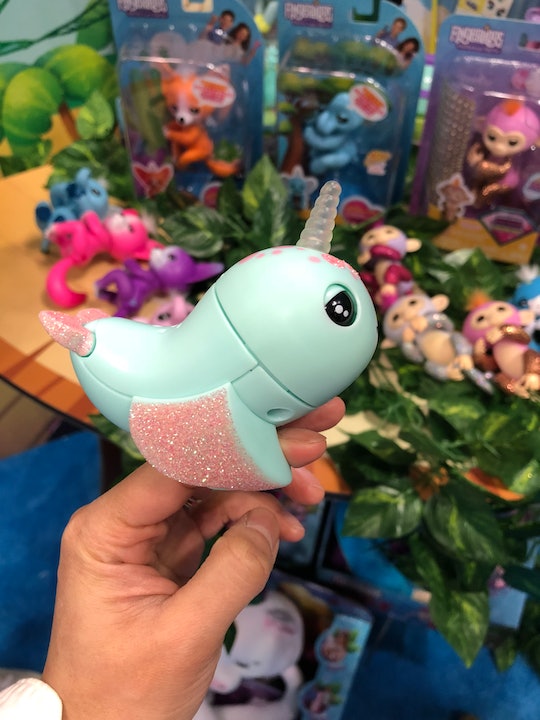 I'd say the Fingerling craze is still going strong based on the number of 8-year-olds I see running around with the plastic cuties attached to their hands on a daily basis. Lucky for the obsessed little ones, a brand new Narwhal Fingerling is coming out in March 2019, and it's pretty much the most magical edition of the uber-popular toy yet. The soon-to-be-released product has major updates from the original iteration of the toy, including responsive technology and a new way to wear the most adorable accessory around, so it's basically like Christmas in March.

WowWee's latest invention looks similar to the other Fingerling products and has the same basic design (an almost too cute animal designed for kids to model on their fingers), but the company's new myth-inspired developments to the popular toy line takes the wearable experience to the next level. The Narwhal is worn like a ring instead of upright, making it less cumbersome for kids to keep with them at all times, and the tech embedded into the product allows for more interaction. The sea creature can move its tail, light up its horn in different hues to let you know what mood it's in, and kiss your cheek if you raise it to your face to its mouth thanks to KissTech technology. It's basically a fully functioning robot friend your child can have with them 24/7.

But the coolest feature might have to be the Magic Motion Sensor that provides a realistic swimming experience: the Narwhal can tell when it's swimming deep in the ocean, on a big wave, jumping up high, or splashing into the water as a result of how you move your hand. It will make different sound effects based on its activity, letting you know exactly how it feels about heights or deep-sea dives.

Pretty impressive updates, right? And it's clearly just as adorable as all of the other Fingerlings, if not cuter. The head designer of the line Sydney Wiseman told Parents.com that the company "looked at all the best features from the original series, and what people enjoyed the most from the plush Fingerlings Hugs, and then put that technology into these," allowing WowWee to keep the integrity of the product while improving it with tech kids will love. I'd say that's a mission accomplished.

In case you needed more reason to hop on the Narwhal trend, you'll be happy to know there isn't just one color option when it comes to the unicorns of the ocean. You can expect to see four versions of the horned sea creatures when they hit shelves: Rachel (pink), Nikki (cyan), Nori (periwinkle), and Nelly (purple), and your kids will have a blast collecting them all. And even better news, come this fall, plus Finglerings Hug versions of the narwhal line will start popping up in retailers, and they're designed to be worn like a necklace or around your arm.

The ocean-eyed Fingerlings go on sale in early March at $15, which is honestly a steal for the hours of fun these guys will provide. I'd mark your calendar now, as Fingerlings are known to sell-out quickly. And keep an eye out for the Baby Shark Fingerlings coming out in fall 2019 for even more high-tech fun.