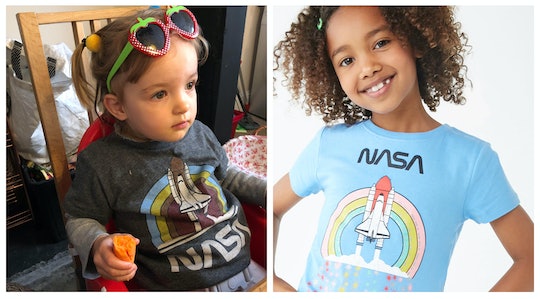 When I first stumbled upon a gray, retro-looking NASA T-shirt in the boys' clothing section of my mom's local Target, there was no question that I wanted to buy it for my daughter, Luna. I lucked out, too, finding one in a 3T size that I knew would last at least a year or two. Her interest in space, rockets, planets, and moons (which feels pretty appropriate, given her name) has been running strong for some time now, and the NASA tee seemed like a fitting way to represent that fascination.

In the year or so since I bought it, however, such T-shirts have grown to experience a bonafide moment. You see them in the playground on toddlers, and you see them on the dad at the food co-op. You see them on rockstars and babies and celebrities alike.

Of course, NASA tees, and especially those featuring the symbol for the Space Shuttle program (which, between 1981 and 2011, carried out routine Earth-to-orbit transportation of crew and cargo) have been a popular retail phenomenon for years. Anne Hathaway rocked the classic NASA logo in 2013, as did Cara Delevingne the following year. Like all trends, it filters in and out of public consciousness, and seemed to have several off-seasons, briefly returning in 2017, when Katie Hinde made headlines for moving some NASA-themed tees from the boys' section of a shop into the girls' section (a move simultaneously criticized for creating more work for the store's employees, but celebrated for bringing attention to the fact that girls like outer space, too).

Until October of 2018, that is, when Ariana Grande repped the now-retired red cursive NASA logo on a white, long-sleeved tee, and subsequently released the song "NASA," in which she sings "You know I'm a star; space, I'ma need space." Coincidence or otherwise, when I visited the aforementioned Target in November, it was overflowing with National Aeronautics and Space Administration tops in the boys' section.

They appear to be everywhere we approach 2020; a time when we are both pondering Brad Pitt floating through zero gravity, and threatening to storm Area 51 in search of those aliens. So what is behind the trend?

"Nostalgia is a very strong graphic tee category," says Alyssa Catalano of Pittsburgh, Penn., who has a 3-year-old daughter, and previously worked as a graphic T-shirt buyer for Urban Outfitters (UO currently has multiple NASA-branded items available for purchase).

For many GenX-ers and Millennials, the now-defunct Space Shuttle program's logo, and the image of the classic shuttle with its two solid rocket boosters and disposable external fuel tank, conjure up memories of childhood — of our curiosities about the unknown, or our daydreams of someday, maybe, making first contact, or our desire to become astronauts ourselves.

Catalano inherited some NASA hand-me-downs for her own daughter, and thinks that "space gear on little girls is an alternative way to say 'girls like science' without a terrible word shirt telling me girls like science."

"We have this shirt with an astronaut on it," she adds. "It's not NASA licensed, but it's got a vintage vibe and I always love when [my daughter] wears it with one of her big fluff skirts because it so completely captures her varied interests."

Maria Cristina Gonzalez-Lopez, in North Palm Beach, Fla., can relate. "We were in Target and saw NASA and other space shirts on the boys' section," but none in the girls' section, she tells Romper. "My daughter has been encouraged to shop in any section, so we took it as an empowered move as in 'we don't have to conform to shop in a specific section,' [while] trying not to be super upset about the fact that they didn't think girls would want that!"

"This year, I have seen more spaced-theme clothing in the girls' section," she adds. "Even one that says 'Future Rocket Scientist.'" Gonzalez-Lopez's daughter has been into science since she was little, but her interest piqued through a "cousin who was working for NASA in the project for Jupiter's moon Europa."

As for the general resurgence of the trend, she wonders if it might also coincide with the 50th anniversary of the moon landing in July of this year, as well as the release of Hidden Figures back in 2016, a film that celebrated the female African-American mathematicians who played a pivotal role in helping the U.S. win the space race.

More wistfully, a 2018 Quora thread asked, "Will we ever resume space exploration?" NASA is currently probing the outer limits of the solar system, and Elon Musk's SpaceX aims to "enable humans to become a spacefaring civilization and a multi-planet species by building a self-sustaining city on Mars," per its own website. Exploration is ongoing, but the renewed interest in NASA also comes at a time when climate change is the key motivating cause for kids, and concerned parents are hoping for a moonshot solution to rising carbon levels in the atmosphere. There have additionally been calls to create the Apollo project of climate action. Perhaps that is why the NASA logo is beaming out from so many chests.

And, maybe it's ultimately hopeful.

Because when it comes to both our kids and outer space, the whole point is shooting for the stars.