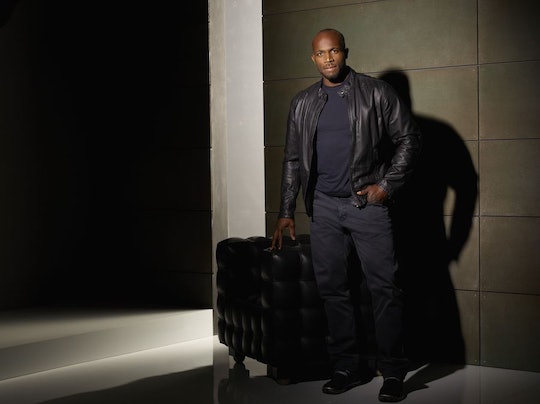 On prime time television, it's pretty much a given that most of the actors are good looking, but when it comes to How to Get Away With Murder, there is a new fan favorite to ogle. When Nate from HTGAWM went shirtless for the umpteenth time on Thursday night's episode, a solid crush was born. He's always been a too good looking to handle type of character, but when he waltzed into Annalise's house, literally dripping with oil and sweat, it was enough to make Oliver drool, let alone all of us. Can anyone really blame him, though? At this point, you have to assume that there is some clause in Billy Brown's (Nate) contract that says he must appear oiled up and shirtless at least one per episode.

Let's be fair — at the very least, they give Nate plenty of reasons for being shirtless or wearing barely there, half-zipped up hoodies with nothing underneath. The man cares about fitness and about keeping his body a temple, so of course he's going to be the picture of shiny bulk any time we see Nate without a shirt on HTGAWM. It might be starting to verge on gratuitous, but is anyone really all that concerned? Even Conrad Ricamora (Oliver) knows what's up.

Seeing Nate HTGAWM without a shirt on is nothing new, but now that he's clearly moved in with Annalise and things are getting a little more domesticated, it's going to be only natural to see the muscular police officer walking around the house shirtless, no matter who's working there at the moment. And yes, Twitter approves tenfold, because it's Nate, and anyone who works that hard on their body has every right to show it off any chance they get.

All of this sudden screen time for Nate could mean that we're just going to get to see more of his glistening torso, but it could also mean that the beauty that is Nate is just being built up more and more so that once we find out that Nate is the one in the body bag on HTGAWM (if it happens), we'll be as sad as Annalise. Who else is she crying that hard over? You don't find abs like those every day.

Twitter loves Nate on HTGAWM no matter what he's wearing, but when he's sporting those gym clothes and a sweaty chest that is obviously just covered with gobs of oil, he's kind of everything to everyone. We can only hope, though, that this doesn't mean we're watching everything that will lead up to Nate dying on HTGAWM and breaking all of our hearts.