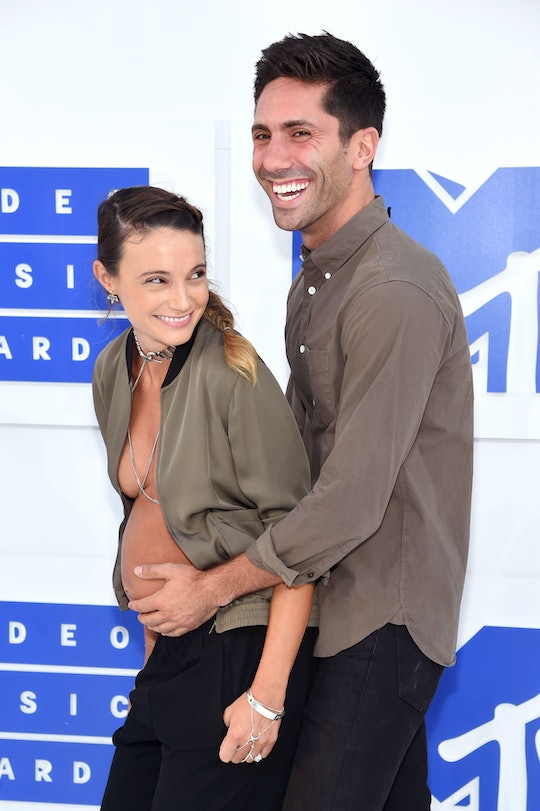 It's no secret that paid family leave is crucial for the well-being of children and families all over the world. It's also somewhat of an open secret that views on who should take time off when a baby is born are oftentimes super duper, infuriatingly sexist. But breaking down the data and setting out to jumpstart change is the dynamic, gender stereotype-crushing engaged duo of Catfish star Nev Schulman and Laura Perlongo, who recently discussed maternity and paternity leave numbers you definitely should know.

The first thing to know about Laura Perlongo is that she's pregnant — or, "very pregnant," as she reminds viewers of the informational video by ATTN: in which the couple starred. But that's not slowing her down. In addition to rocking an open jacket with just her very exposed, very pregnant belly underneath to MTV's Video Music Awards in August, she's educating the public about policies that hurt women, men, and their families along with Schulman.

Perlongo starts with the sadly not-so-shocking shocker that the United States is the only industrialized country that does not offer paid maternity leave to new moms, and that, globally, moms get waaay more days of paid leave than the fathers of their children do — a injustice that rankles of sexism and perpetuates the harmful cultural idea that mothers are more central for their kids' upbringing than their dads are.

To challenge that tired, false ideal and other prescribed gender roles, Schulman and Perlongo refuse to do what society as a whole thinks they should throughout the video. "Globally, moms get an average of 106 days of paid leave fora new baby, while dads only get an average of seven," Schulman says from the kitchen, where he's making a smoothie and doling it into glasses. "I mean, these policies are totally sexist," his fiancée picks up from their unborn baby's bedroom as she uses a drill to assemble a crib. "It’s basically saying that taking care of a child is a woman’s job, and that’s not the sort of relationship we have, right, babe?"

It's clearly not. Unfortunately, though, many policymakers (and potential policymakers) in the United States haven't woken up to this yet. Just this month, Republican presidential candidate Donald Trump unveiled his new proposed child care plan, which aims to make taking care of kids more affordable for families, and even offers six weeks of paid leave — to mothers only. That means dads would be simply S.O.L., no matter what. Ouch.

Trump must have missed the memo: Schulman says in the ATTN: video that, according to a study conducted in Sweden, a man's partner's income increases by 7 percent for every month of paternity leave he takes. And it's certainly not just about money: Perlongo says that kids whose dads take paternity leave actually do better in school, researchers in Norway found.

So, as far as I'm concerned, the results are in. It's imperative that both moms and dads have the opportunity to spend time bonding with and nurturing their children. It's 2016, people.

More Like This
Hannah Waddingham Used To Take Her Daughter To Work When She Was A Baby
30 Adorable Baby Halloween Costumes, From Animals To Avocados
Rainbow Baby Shower Ideas To Celebrate A Very Special Baby
Experts Explain Whether It’s Safe For Your Baby To Sleep On Your Chest