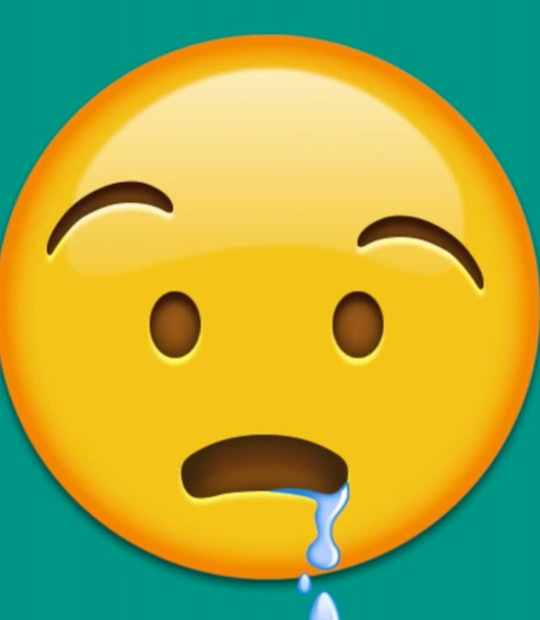 Oh hey, new emojis are (almost) here! An exciting slew of these tiny images got the official approval from the emoji overlord bodies-that-be Tuesday, so prepare for 72 additions to your personal emojiverse once Apple, Google, and Microsoft update their software. Aside from the inevitable emoji woman taking a selfie and the much-hyped bacon emoji, there are also plenty of new emojis that parents can use to communicate behind their kids' backs, because sometimes words just can't describe children's whacky antics, and, also, it's 2016.

If you're really trying to have a private chat away from kiddie eyes, emojis probably aren't the way to go, because children of the new millennium are one with emojis, and by the time they get to college they're probably write research papers using them exclusively. But, still, some of these newbies are too good to pass up for parents even though some parents of newborns might think the pile of poop with eyes is more than enough. For everyone else, it just became a little easier to describe those little humans: When they're sick? Sneezing face. When they won't eat their vegetables? That'll be the carrot emoji, or maybe the cucumber, and no dessert.

Here's a slow jam new emoji primer, to get you in the mood:

Also, the new batch of emojis feature a pregnant woman, which comedy show host Jimmy Fallon joked is what you get nine months after texting "You up?" It could also be how you tell your partner or best friend your kid's about to have a little brother or sister (maybe texting isn't the right platform for that, though...?).

The new emoji also showcase some examples of gender parity, because that's definitely been an issue in the past. So, introducing the "Mother Christmas" emoji because kids need to know that Santa couldn't do it all alone. And if you have a little boy who's just perfect, there's now a prince emoji to complement the existing princess one. Emoji equality!

Kids aren't always perfect, though, and their fibs are (one of the reasons) why the Pinocchio emoji, with it's nose fully extended, is headed to an emoji keyboard near you. Ditto the drooling face, because babies, and the green "nauseated face" emoji, because as great as kids can be, cleaning up after them is kinda gross sometimes.

Maybe adults can use emojis behind kids' backs now, but one day they'll have an arsenal of young-people emojis that will go right over their parents' Millennial heads. Until then, let's get ready to use the clinking champagne glasses emoji to toast the new emojis that are just right for living and parenting.