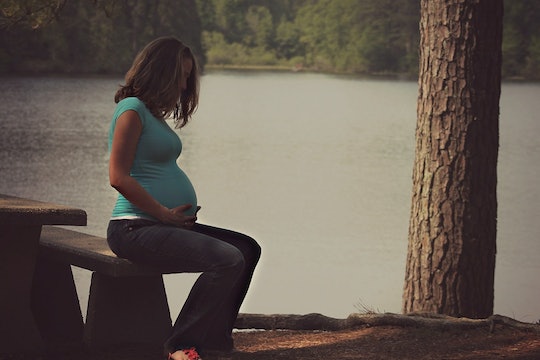 Taking Antidepressants During Pregnancy Is Possible, But Not Risk-Free

Pregnancy is often a time when a woman may have to weigh certain health decisions based on the benefits and risks to herself as well as to her growing baby. And when it comes to managing a chronic mental health concern like depression, anxiety, or panic disorders, her questions — and fears — may only compound. Decades ago, doctors often cautioned women against taking antidepressants to treat mental health conditions out of concern for potential risks for the child, according to a recent NPR report. But new findings on antidepressants in pregnancy may change the kind of mental health treatment options available to women during pregnancy.

A study published this week by Yale researchers in JAMA suggests that while taking antidepressants in pregnancy is not risk-free, there may be far less reason for mothers to worry than the medical community once believed.

Despite evidence that anti-anxiety and antidepressant medications often prescribed to treat those disorders post no risk to a baby’s physical development while in utero, physicians and parents have long held concerns about other potential dangers. Recently, studies showing that Xanax, Zoloft, and other medications cause depression in kids and that language disorders in children whose mothers were treated have added to those concerns.

But the major question left unanswered has been whether those drugs increased the risk of preterm births or posed additional risk to the baby’s health before delivery. In a study of more than 2,600 women during pregnancy and postpartum, treatment for panic or generalized anxiety disorder apparently posed some maternal health risks, but not as many as researchers had once feared.

Yale researchers found that women who took certain commonly prescribed drugs — such as Zoloft, Paxil, and other serotonin reuptake inhibitors (or SSRIs) — had an increased risk of a C-section and the need for oxygen support during delivery. The study also found that the pregnancies of women who underwent treatment were two to four days shorter, on average than others. But the overall impact, according to the study findings, was minimal.

Depression affects as many as one in four women during pregnancy, according to the American Congress of Obstetricians and Gynecologists. In addition, other research suggests that postpartum depression remains one of the most underidentified conditions in women following a delivery. And for many women, the consequences of forgoing treatment and support can be dire: a recent report found that suicide among pregnant and new moms was among the leading causes of maternal death — and often associated with depression.

Speaking to NPR this week, Yale psychiatrist and the study’s leading author Dr. Kimberly Yonkers said the evidence she and her colleagues have gathered may help to ease some parents’ minds:

We found that the maternal illnesses of panic disorder and generalized anxiety disorder were not associated with preterm birth or low birth weight or some of the other complications to mother and her offspring. So, that's really good news.

The bottom line, Yonkers told NPR, is that women who need these medications to manage their mental health conditions will hopefully feel more comfortable talking to their doctors about continuing treatment throughout their pregnancy. For the one in seven women who may experience symptoms of a mental illness during pregnancy, skipping treatment may not be the only — or even the ideal — way to ensure a healthy delivery. The important thing, as always, is for a woman to work with a medical professional to determine the level of treatment that will keep her healthy.