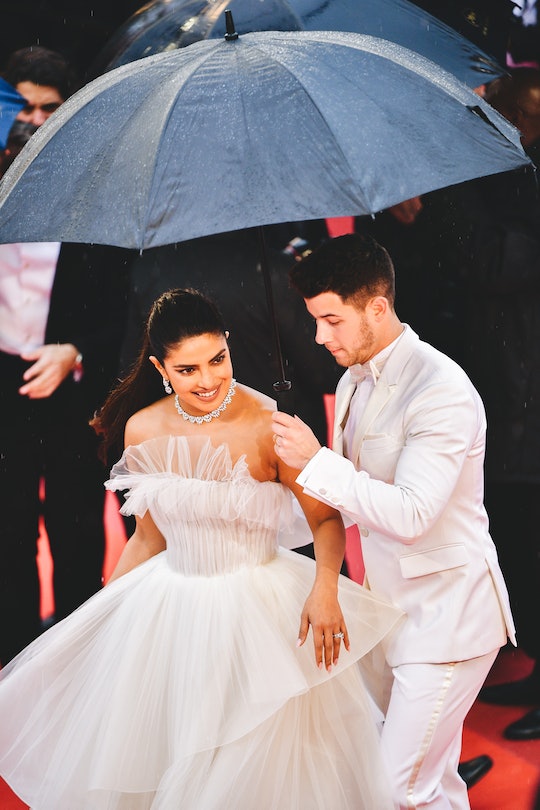 Nick Jonas and Priyanka Chopra are pretty much relationship goals. The couple has been married for just a few months, but they recently celebrated another adorable milestone in the sweetest way. Jonas's tribute to Priyanka Chopra on their 1-year dating anniversary will bring a tear to your eye.

On Saturday, the 26-year-old musician shared a photo of himself on Instagram holding his wife on a picturesque balcony in Cannes, France. The pair could be seen wearing all white outfits, staring longingly at one another. In his caption, Jonas waxed nostalgic about his first date with Chopra, recalling that they'd gone to see Beauty and the Beast in Hollywood "with a group of friends." Among them, Jonas wrote, "was the woman that would become my best friend, my confidant, my muse, my beautiful wife." He added that he was "so grateful" for their time together.

"You make me smile every day and you inspire me to be the best version of myself. I am honored to be your husband. I love you," Jonas concluded.

Chopra shared an equally heart-warming message for her beau, according to Entertainment Tonight. He arranged for her to see Mariah Carey in concert. After the show, the outlet reported, Chopra got to meet with the singer. In photos she shared from after the event, she called him "The best husband ever." Jonas wasn't able to attend the show with her, but it looks like his presence was felt throughout. Chopra called the meeting a "dream [come] true."

The couple started dating in 2018, but they had been in contact prior, according to Vogue. Jonas told the magazine they traded DMs for a bit, and finally met at the Vanity Fair Oscars Party in 2017. Jonas said he went above and beyond to wow Chopra that night, breaking out a seriously romantic move.

"I put my drink down, got on one knee — this is in front of a bunch of people — and I say, 'You're real. Where have you been all my life?' Like, loud," he recalled, according to Vogue.

Jonas and Chopra married on Dec. 1, according to People. They tied the knot at Umaid Bhawan Palace in Jodhpur, India. The ceremony spanned across several days, with a second reception following in Mumbai.

They may have rushed down the aisle, but Chopra and Jonas aren't in a hurry to have kids. The couple told Extra they intend to take their time starting a family, though it's definitely something they want to do.

"We're taking our time," Jonas said at the time.

He previously told E! News that while they weren't working on kids right now, they were looking forward to it. The "Cool" singer said he wanted to build "a legacy" before they start a family, which stars with trying to "think about the future" with jobs both he and Chopra take.

"And building something that becomes a part of a legacy in some way, and a story we can share with our kids in the future," he said. "That's everything from the music to projects that we align ourselves with and, maybe some of our projects that are more adult-themed we'll hold those back 'til they get older obviously. But with something like [Ugly Dolls], it's just a joy to be able to do this for the kids in general."

Fans can't wait to see what the future holds for Jonas and Chopra. It's been a joy to watch them grow and fall more and more in love, and it can only go up from here.