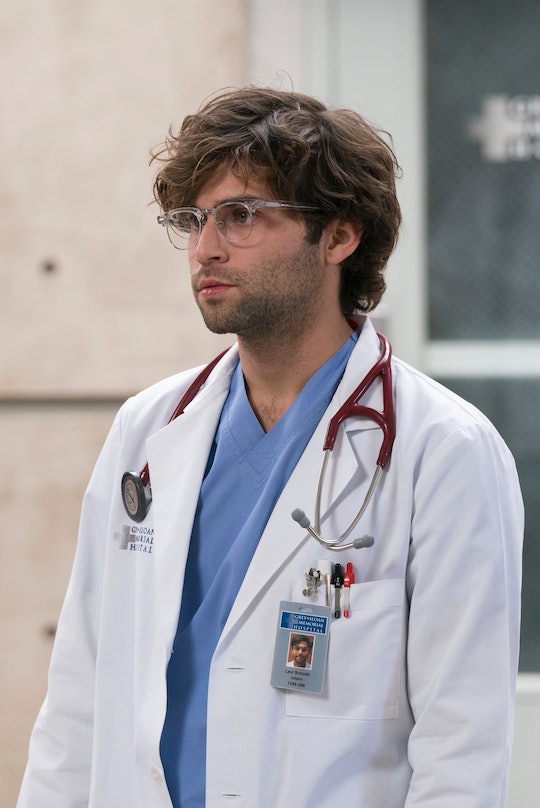 Levi is probably best known as "Glasses," the awkward and admittedly nerdy doctor who Jo slept with on a whim last season on Grey’s Anatomy. But this season his character was taken to a whole other level when he was caught checking out the newest orthopedic surgeon, Nico, who happens to be gay himself. Until now it was unclear if Levi was actually into him in a romantic way, but when Nico kissed Levi on Grey’s Anatomy Thursday night, it was like fans had been waiting for it with bated breath.

Like all things with Levi, his first few interactions with Nico were a little awkward this season. Nico seemed to zero in on him almost immediately, but Levi was skittish and unsure of himself until Nico kissed him in the elevator in a very Grey’s way. Kissing in the elevator in that hospital is like a rite of passage and maybe it means a long future ahead for the potential couple.

Nico wasn't thrilled to have been Levi’s first kiss with a man, however, which he hadn't realized until after their mini makeout sesh. But regardless of whether or not they’re going to be falling in love anytime soon, Twitter was here for that kiss.

Nico is actually the first openly gay male surgeon to grace the operating room at Grey Sloan Memorial Hospital, as hard as that is to believe. In the past, Callie and Arizona worked for the hospital and were also openly bisexual and lesbian doctors, respectively, but Nico is the first ever gay male doctor on Grey’s Anatomy and it’s about time.

Showrunner Krista Vernoff spoke to The Hollywood Reporter about Season 15 being the season of love for Meredith, but also for some other characters. "We have a beautiful coming-out story and romance. It's our favorite thing at every table read," she revealed. "It's vivid and exciting and brand new for our show because it focuses on gay men. Alex Landi [Nico] is an exciting addition to the cast, for sure, and you have to watch if you want to know more about that story!"

If Vernoff’s "coming-out story" is about Levi, that’s a huge deal. Even if he doesn't end up with Levi by the end of the season, Nico might have woken something in him that he didn't realize was there. And it’s all thanks to that steamy elevator kiss.

The kiss itself seemed like the beginning of something amazing between the two doctors, but Nico was put off by the pressure of dating someone who hadn’t come out yet. Levi did look like he was ready for round two. He told Nico that working with him in ortho was fun and although it was his first time working in ortho, he really liked it. "Up until now I’ve been focused on general and I liked that," Levi said. I think it’s all but implied that he was referring to kissing Nico, a man, for the first time. Levi kissed a boy and he definitely liked it.

Levi and Nico as a couple wwas teased at the beginning of the season when they had a drink together at Joe’s Bar. At the time, Levi was oblivious to Nico’s interest in him, but it was clear to viewers that Nico was interested in him romantically. So really, that kiss was a long time coming. And overall, a love connection between two gay male doctors was a long time coming as well.

I don’t know where Nico and Levi go from here, especially since Nico seems to have zero interest in pursuing anything with him now that he knows he was Levi’s first kiss with a man. But they’re already one of the best potential couples I’ve seen on Grey’s in a long time and so many fans are already hardcore shipping them.