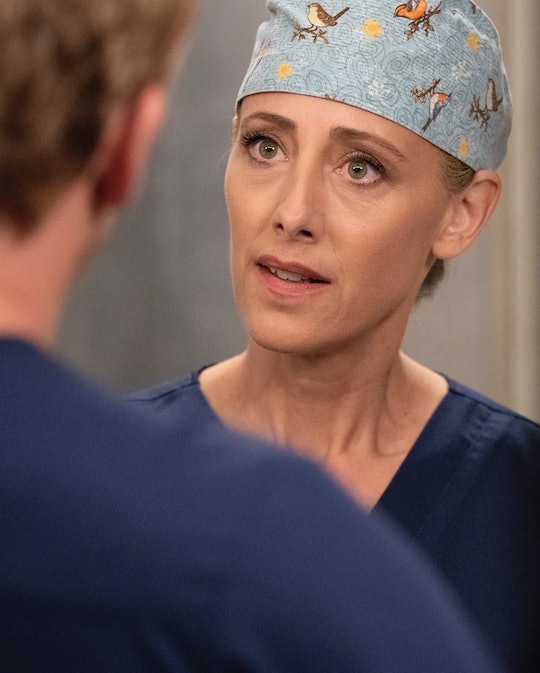 Nothing says Grey’s Anatomy like a surprise pregnancy raining on someone else’s parade. Owen and Amelia are finally (sort of) back together, and suddenly Teddy is pregnant and ready to give Owen everything he wanted from her months ago. You know, just Grey’s things. But since he’s still one of the only people who’s in the dark about it, will Teddy finally tell Owen she’s pregnant on Grey’s Anatomy? In last week’s episode, "Everyday Angel," Teddy seemed like she was ready to finally take the leap and tell her baby daddy that he is, in fact, a daddy. Or, at least, a soon-to-be dad to someone other than Leo, his foster child.

But as with all things on Grey’s Anatomy that fans need to happen, it might be stretched out a little further. I have a feeling that as soon as Teddy realizes how happy Owen is with his current familial situation with Amelia, Leo, and Betty, she’ll go running for the hills again. It’s daunting to tell any former significant other that you’re pregnant, let alone someone who may have finally found their happy place. Teddy will have to tell Owen eventually, but I don’t think it’s going to be anytime soon.

Right now, Meredith and Maggie already know about the pregnancy, but it probably won't be long before other doctors find out. And if Teddy sticks around Seattle long enough to start showing, Owen is definitely going to know that something’s up. Last season when Amelia had her brain tumor, it seemed like he and Teddy were supposed to be end game. But suddenly Owen and Amelia’s relationship took a complete 180 and they seem like they’re in a better place than they’ve been in years, including during their marriage. Once upon a time, I might have shipped Teddy and Owen, but it’s hard not to root for Amelia and Owen’s new relationship.

Kim Raver, who plays Teddy, spoke to The Hollywood Reporter about a possible love triangle between Teddy, Owen, and Amelia. "We're in 2018 and I pitched, if we can, not having woman pitted against woman. Amelia and Teddy definitely have what they want, but maybe there's a different way for us to approach it. And the writers seem very interested in that and we're hopefully going to head in that direction," Raver said. "I can't talk about it, but [there’s] a device in the storyline to make the love triangle different than we've seen it in the past."

Fans might remember Teddy and Owen having already been in a love triangle with Cristina in the past. But, according to Kevin McKidd who plays Owen, it will be very different this time around. "Owen and Teddy and Cristina had a very intense, slightly juvenile love triangle," he told The Hollywood Reporter. "What they want to do [now] is show people who have histories and have feelings — all three of these people have a lot baggage and history with each other. And there's children involved, which is a responsibility... It's going to be interesting to see how people navigate this pretty murky and difficult and challenging news."

McKidd also revealed that Owen will be in the dark about Teddy’s pregnancy for a while, but eventually, there will be a question of what he should do and who he should be with. He’s wanted a family for so long and now he kind of has two. It’s going to be interesting to see how it plays out, but hopefully Teddy can break the news before someone else does or before she’s showing up to work wearing maternity scrubs.