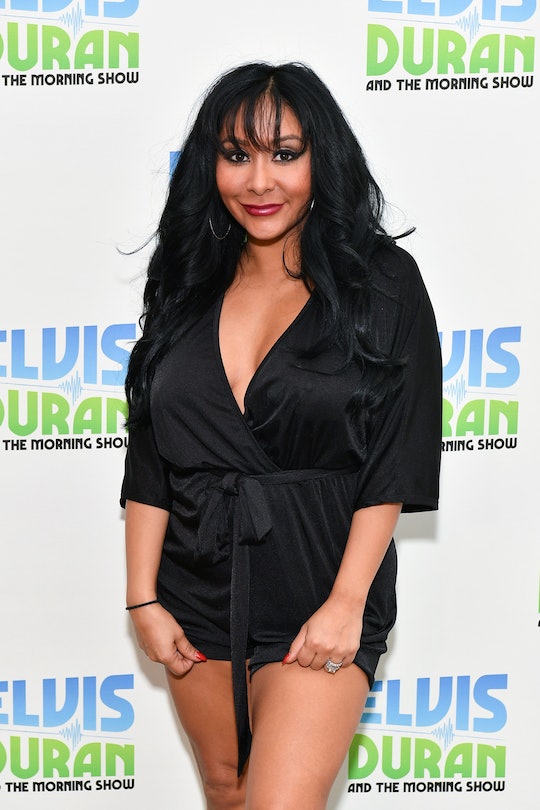 Nicole "Snooki" Polizzi's "Then & Now" Instagram Pic Is *So* Pre-Motherhood

If you've been on social media at all recently, then you've likely seen all the posts from people comparing photos of their younger selves with current pics. The viral trend is being dubbed the "How Hard Did Aging Hit You?" challenge, but for some, it actually seems that time has totally been on their side. In fact, Jersey Shore star Nicole "Snooki" Polizzi's "Then & Now" Instagram photo shows that there are some aspects of our younger years we're all more than happy to put behind us.

Snooki may currently be totally settled into life as a happily-married wife and a soon-to-be mom-of-three, but that's definitely not who she was when she first became famous. On her Instagram page Sunday, pregnant Snooki shared side-by-side photos of herself 10 years ago versus today, and it was basically night and day. That's because while her current pic shows her snuggling bare-faced on the couch with her 6-year-old son, Lorenzo, and 4-year-old daughter, Giovanna, her throwback back was a shot from her Jersey Shore days in 2009, when she was snapped crawling around drunk on the beach. And, in fact, it was likely a particular low-point for the star, as she'd actually ended up getting arrested that day for being intoxicated in public, according to The Daily Mail.

In other words? As much fun as she may have had during her carefree party days, it definitely seems like motherhood and mellowing has worked really well for her. In fact, with a longed-for third child on board, these days, Snooki has officially swapped her booze-filled parties for a decidedly different kind: On her YouTube channel recently, the 31-year-old shared footage from her family's sex reveal party, in which they shared with family and friends that their baby-to-be was actually a boy.

In the sweet clip, Snooki shared that, while she and husband, Jionni LaValle, had already found out the sex of their third child, they still wanted to throw a party to share the news, particularly with their children, whom they hadn't already told. In the clip, her son Lorenzo could been seen hitting a special baseball filled with blue powder, which cracked open and let everyone know that a little baby brother would be on the way.

Motherhood hasn't entirely changed Snooki though. In April 2018, Snooki reunited with her MTV cast mates for Jersey Shore: Family Vacation, according to People, and though the stars had since settled down with partners and kids, it was clear they were all still down to have a good time.

Unfortunately, in one episode, Snooki — who'd been hoping to get pregnant again — learned that the sudden nausea she'd been feeling wasn't actually due to having a baby on board, but instead that she couldn't quite handle day drinking the way she could in the past. After taking a pregnancy test that turned out to be negative, Snooki said, "I'm not pregnant. I'm so annoyed. I'm just old and I can't f*cking hang anymore."

These days, though, it's likely she doesn't mind *too* much. After finding that it was taking long than she anticipated to get pregnant the third time, Snooki revealed in a separate YouTube video announcing her pregnancy that she was beyond thrilled to finally be adding to her family, and in a Thanksgiving Instagram post, she shared a sweet pic of her son and daughter holding a sonogram photo of their soon-to-be younger brother, along with the caption, "What I'm thankful for this Thanksgiving."

Comparing photos of yourself from 10 years ago to now isn't always a ton of fun, but sometimes, they can be visual proof of how far we've come in life. For Jersey Shore fans, it may have once been hard to envision that Snooki would end up throwing herself into marriage and motherhood, but it definitely seems to suit her really well. And as much fun as she likely had back then, it's probably safe to assume she wouldn't trade in for her life now for anything.