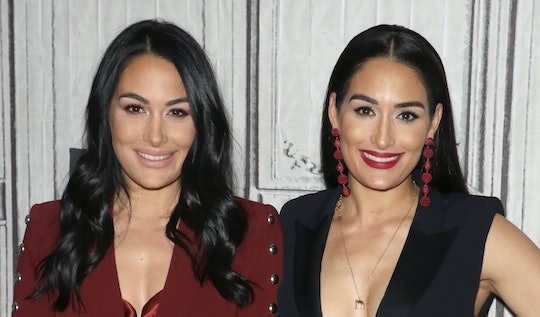 World, meet the Bella boys. After giving birth just one day apart from each other twins Nikki and Brie Bella have revealed their newborns' names and they are absolutely adorable.

The sisters told People that their babies are already displaying some serious similarities, just like their twin moms. "What's crazy about Buddy and Mateo is, they both have the same scream-cry," Nikki told the magazine. "It's the cutest high-pitched noise and they're identical. Even their coos are identical and they're so cute."

While the Bella twins revealed in February that their original due dates were 10 days away from one another, they ended up giving birth to their sons just 22 hours apart when Nikki's water broke earlier than expected. The sisters predicted this would happen during a February episode of their podcast, The Bellas Podcast. "Technically our babies could be born on the same day," Nikki said at the time. "Because we're twins and twins are weird, I feel like they might be," Brie added.

Not only are their sons' names very sweet and unique, they also have really special meanings. Mateo has Spanish origins and means "gift of God," while the name Buddy has English origins, according to NameBerry. Brie explained in an Instagram post that Buddy's name has a special meaning to her and her husband. "Named after Bryan's dad and his middle name is pronounced Desert, after my Nana's maiden name," she wrote. "He came into our lives in such a special way, we wanted to name him after some special people."

Buddy's older sister also has a unique name; Brie gave birth to her daughter Birdie in 2017.

The retired professional wrestlers told People that their sons are already fighters. Nikki told magazine that Mateo will "punch" her boobs when she's feeding him and Brie said that Buddy "loves kicking." But overall, Brie said that their babies have a very calm and patient demeanor. "We're the wild ones and very feisty," she told People. "Our little boys don't have our personalities yet."