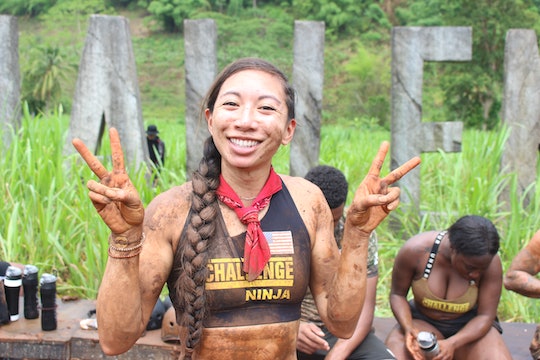 Laurel Came For Ninja On 'The Challenge' & Things Got Messy

At the start of Wednesday’s episode of The Challenge, the US team was crumbling. It didn't take long for the lines to be drawn and for alliances to form, despite the need to all work together to beat the UK team. Ninja Natalie ended up on the opposite side of longtime Challenge vet Laurel, so it made sense when Laurel came for her on the proving ground. And Ninja and Laurel’s elimination match on The Challenge was a total battle of wits. Normally, it's all about physically besting the other player, but this time, it was also about Ninja mentally overcoming the challenge and proving herself to the rest of her team.

Laurel made it a point to go into the competition out for blood. She explained in the episode that Ninja had talked a big game and Laurel was ready to not only cement her place as a strong competitor on her team, but also beat another formidable player in the process. And at first, it seemed like that’s what Laurel did. The competition involved climbing up a pole and inserting rods into designated holes faster than the other player. Although Ninja holds a Guinness World Record for the fastest female five meter rope climber, Laurel made it to the top of her pole first, rang the bell, and it was over.

At least, that’s what Laurel thought, as she engaged in an over-the-top celebration of her perceived victory. But when Ninja noticed Laurel hadn't inserted all of her poles and host TJ confirmed this, the women climbed back up and this time, Ninja was the winner.

It was an epic elimination round between two competition beasts who already made their mark on The Challenge. If they could have found a way to work together prior to the proving ground, they might not have found themselves in such a position. But this ended Laurel’s time on The Challenge after years away and Ninja lives to fight another week for her right to battle it out against the UK team.

There was also a moment where it seemed like Ninja might become a turncoat and defect to the UK team. Her US teammates had, after all, turned against her to nominate her for the proving ground. In the end, however, Ninja stayed true to her team and proved her loyalty once again.

Ninja’s biggest problem in the first place was working with Wes. Because she had been in one of his alliances, Laurel came for her. And after Kyle revealed all Laurel needed to know to understand who on the US team needed to go after working with Wes, Ninja was a target. On The Challenge, it’s about the physical competitions, but it's also about having a competent social and political game. Wes went too far way too early in the game, making alliances and playing both sides without concern about who might find out about what he was doing. Ninja was a small part of this and after Wes was taken out of the game, some of the other players were ready to take out anyone who had worked with Wes.

Even though Ninja is still loyal to the US team, it doesn't mean she forgot who convinced the UK team to throw her to the wolves on the proving ground in the first place. For now, she is still a team player. But if the teams are eventually disbanded, Ninja could get her chance to blow back hard on any of the US team members who doubted her.