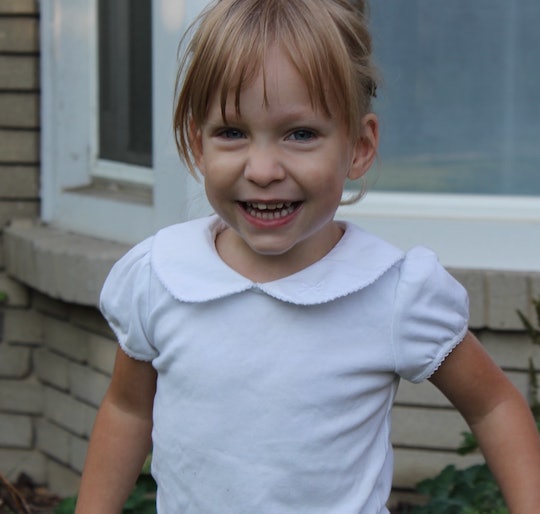 No, I Won't Hide My Daughter's Disability From Her

This weekend, my 3-year-old daughter, Madeleine, will take her first-ever ballet class. She is absolutely and totally psyched about it, but if I'm being completely honest, I almost didn't enroll her in the class. That's because the class she'll be taking is one designed specifically for children with disabilities, and even though Madeleine has cerebral palsy, I struggled at first with the feeling that I'd be holding her back by keeping her from dancing in "normal" classes alongside side typically-abled kids. However, despite all of my second guessing, it's incredibly important to me that I don't hide my daughter's disability from her. And that means constantly reminding us both that there's absolutely nothing to be ashamed of.

My husband, Matt, and I always knew that there was a good chance Maddie would have some kind of disability in her life. She and her twin brother, Reid, were born prematurely at 25 weeks gestation, and in the aftermath of their birth, Madeleine suffered multiple brain hemorrhages that required two surgeries before she had even reached her actual due date. Doctors told us that, statistically, babies like Madeleine often end up with cerebral palsy, but they couldn't tell us much more than that.

So we did the only thing we could do at that point: we waited. We waited to see what would happen as Madeleine grew, as she showed us exactly what the effects of her early brain trauma really were. Would she walk? Talk? Run around and play? Would she need a walker or a wheelchair or braces on her legs? Would she need intensive therapy? What would her life look like?

I certainly don't want to send Madeleine (or Reid, for that matter) the message that she shouldn't try, that she shouldn't aim high, that she can't do anything she sets her mind to, or anything that anyone else is doing. But I also knew that I absolutely still fully intended to talk about Madeleine's disability openly.

We had absolutely no idea, but slowly, little by little, we found that, somehow, she'd escaped almost entirely unscathed. She did have cerebral palsy after all — a mild version that affects the mobility in her right leg — and she does need to wear a brace on that leg. But all the other stuff? The walking and the talking and the running and the playing and the laughing and the saying hilarious things and making funny faces and generally being our incredible, amazing, badass, ray of sunshine of a girl? That stuff was all there. She is a warrior. I am constantly in awe.

But receiving her diagnosis was still hard for me, and coming to terms with my own unintentional prejudice about disability has been an ongoing process of checking my own ableist privilege. I can't pretend that I don't sometimes freak the hell out, worrying about what other kids might say about the Frozen-themed "boot" she wears on her leg that means she has to wear two different-sized shoes, or the fact that she might walk a little funny, or trip and fall a whole lot, or the fact that she needs to take more breaks and can't always do all the things everyone else can do (even though she's crazy stubborn and insists on trying it anyway).

Sometimes, I'll admit, I feel unsure of how to raise Madeleine to not be held back by her disability, to not think it's sad or less than or something she should feel self-conscious about. Sometimes, like with this dance class, I feel like I'm doing the wrong thing, like I might be "reinforcing" her disability, telling her she's not good enough or able enough or whatever enough to be with the other kids. Sometimes, I have no freaking clue what I'm supposed to be doing at all.

Recently, I was speaking to my mother about Madeleine and Reid's first day of junior kindergarten at the beginning of September. I spoke about how grateful I was that their school was so accommodating, that their teachers understood that Madeleine might need some extra help, and that she has a wonderful education assistant assigned to her to ensure that she gets that extra attention. It was all wonderful news — and something I'd honestly been so, so worried and afraid of — but my mom took it a different way.

"Alana," she said, with a concerned tone. "Do you think it's a good idea to be talking about Madeleine like this? Do you think you should be telling people that she's 'disabled'? What if she starts to think there's something wrong with her?"

I brushed my mom's comment off in the moment, but the sentiment stuck with me. She meant well, and I knew what she was really trying to say: don't sell Madeleine short. And I certainly don't want to send Madeleine (or Reid, for that matter) the message that she shouldn't try, that she shouldn't aim high, that she can't do anything she sets her mind to, or anything that anyone else is doing. But I also knew that I absolutely still fully intended to talk about Madeleine's disability openly. And hopefully, one day Madeleine will as well.

I feel pretty certain that talking about Madeleine's cerebral palsy in hushed tones when she's not around, and pretending that it doesn't exist when she is, is not the way to raise her to feel proud of herself, to feel as though there is nothing about who she is that is shameful or embarrassing.

I may not be the world's greatest disability advocate (although I hope I get better at that as I learn more), but I feel pretty certain that not talking about it, that not saying the words, not being open about the fact that, hey, you know, there actually is something different about Madeleine, is not the way to empower her, or anyone else. I feel pretty certain that not letting her know that it is entirely OK if she looks different, if she walks differently, if there are things she can't do, or things that might be harder for her, is not the way to let her know she is perfectly wonderful and fine, just as she is. I feel pretty certain that talking about Madeleine's cerebral palsy in hushed tones when she's not around, and pretending that it doesn't exist when she is, is not the way to raise her to feel proud of herself, to feel as though there is nothing about who she is that is shameful or embarrassing.

One of the best parts, in my opinion, about having 3 year olds is that they haven't yet learned the social convention of being overly humble. These days, when my kids do something great, they know it — and they want everyone else to know it too. Watch me, Mom! Maddie yells on the regular, demanding an audience for even the simplest of tasks. Once, after facing her fear on "the big slide" at the park, I shouted, Go, Maddie, Go!, something she loved so much that she continued to shout it, cheering herself on, as she ran around the playground.

As she grows, Madeleine — just like every child, and especially every girl — will be exposed to a million different messages that will try and quiet her inner cheerleader. Because she also happens to be disabled (and because that disability is visible) there might be even more pressure on that inner voice to shut the hell up. I may not be able to stop that from happening, but I can at least try to teach her that she can be OK with how she happens to be, that she can talk about her disability, that she can own it; that there is absolutely no reason why she should do anything less.

This weekend, as Maddie heads to her ballet class, I might still be feeling apprehensive. I might still feel unsure about "limiting her" or "sending her the wrong message." I'm still new at this, after all. But one thing I already know for certain is that Madeleine is going to have an amazing time. And, likely for what feels like the millionth time, she'll probably also show me once again that I had nothing at all to worry about, because she has totally got this, as usual.