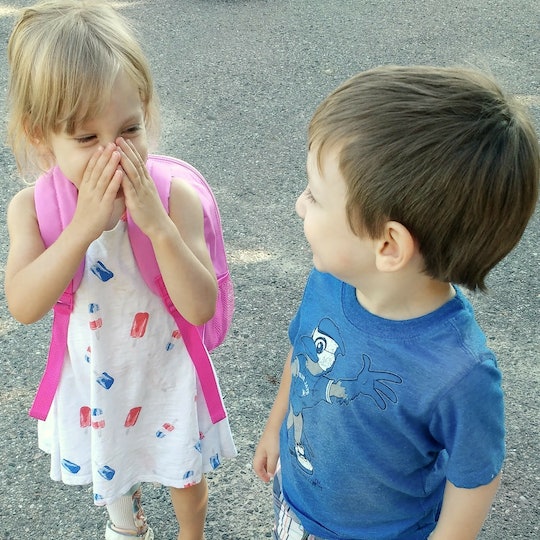 I Regret Not Holding My Kids Back From Kindergarten

My twins start their first day of junior kindergarten today. Granted, the first day of school is often a scary or emotional time for many mothers, and I know I'm certainly not the first to feel super nervous about it. But now that the day is here, the truth is that I regret not holding my kids back from kindergarten, and honestly, I'm majorly worried I'll be making the wrong choice by sending them anyway.

If you'd asked me at the beginning of the year how I felt about the prospect of Madeleine and Reid starting school in the fall, my answer would have been, simply, that they wouldn't be. As babies born in December, they would (like many December babies) be at a disadvantage, but coupled with the fact that they were born extremely prematurely at 25 weeks, the idea of sending them to school where they'd be the smallest, youngest kids by a wide margin seemed both unfair and unnecessary. Had they hung in there even just for a few more weeks and been born in January (which still would have meant they'd have been over two months early), they wouldn't be beginning school until next September. And that's a pretty big difference.

My plan changed though, when it came time for the twin's yearly developmental assessments with their various doctors and specialists. Ahead of the appointments, I was expecting we'd have the conversation about kindergarten, and they'd all agree there was no value in sending Madeleine and Reid to school before they were ready. But that's not what happened. Instead, our doctors and specialists told me it could be good for my kids to start school this year, so long as the teachers and school were supportive of making sure their needs were accommodated.

I started to think that maybe I'd been totally wrong, that kindergarten could actually be a really awesome experience for them, and was even pretty excited about the idea — until shortly after we put the twins in full-time daycare this summer as a test run.

"Maybe," she said. "But I think it would be a good idea to meet with the school and talk about it."

That seemed fair, so I did meet with the school, and they did seem supportive. They were totally understanding about the fact that my daughter has mild cerebral palsy and some related challenges (she isn't physically able to be potty trained yet, so will attend school in diapers), and that put me at ease. I started to think that maybe I'd been totally wrong, that kindergarten could actually be a really awesome experience for them, and was even pretty excited about the idea — until shortly after we put the twins in full-time daycare this summer as a test run.

Suddenly, I was remembering very clearly why I thought sending them to school this year would be a bad idea.

The truth is, I'd been so worried about my daughter's disability that I'd overlooked the fact that my son wasn't actually as ready for school as I thought he was. While both twins seemed to love daycare, there was no doubt my son quickly started to struggle. He was late to take to potty training, but had been doing really well when daycare began, but he soon regressed in a major way, eventually reaching the point where his doctor recommended we put him back in diapers completely and lay off of potty training entirely for the time being. And what's worse, his kindergarten daycare teachers started telling us that he'd begun biting other kids and that he was having a hard time figuring out how to play with the boys who were bigger and more mature than he was.

Seeing him struggle like this made me incredibly worried. On the one hand, I knew he was having a hard time because he wasn't ready, because we were pushing him a bit too much. And yet, we needed to push him, needed him to be ready to start school in September, somehow magically able to use the toilet independently and able to regulate his emotions regularly like the kids born (in some cases) almost an entire year earlier than he was. Suddenly, I was remembering very clearly why I thought sending them to school this year would be a bad idea.

Then, came the final nail in my anxiety-induced coffin: after taking my son to our general practitioner to discuss the ongoing potty-training saga, she told me that she'd actually talked it over with a number of other doctors and pediatricians who were moms as well, and they'd all suggested to her that perhaps Reid just wasn't ready to start school. They'd suggested we might want to consider waiting, to give him more time to develop on his own schedule, instead of forcing him into following the school's arbitrary one.

I went home and did the only thing I could do at that moment: cried my eyes out. I felt like I was failing my son, and yet, it felt like it was too late to actually do anything about it — school was, after all, starting very soon. I didn't know whether I should've stuck to my original instinct, whether I should've held my ground. All I could envision in that moment was my son at school, having a terrible time, and acting like a total jerk to all the other kids because we'd asked way too much of him and he didn't know any other way to express his frustration.

By the time my husband, Matt, came home that day, my brain had launched into full-on crisis mode. I told him that perhaps we should send Reid back to daycare, but to a room with younger kids, where he could get the kind of slow pace and attention he clearly needs, despite the fact that it would cost us a fair bit of money to do so. I told him that perhaps I could quit my job and stay home with him again, despite the fact that I love my job, and that working makes me a better, more-patient mother. I told him I'd even homeschool him if I had to, despite the fact that I'd probably be the world's most useless homeschool mom in the entire world. We just needed a plan, and we needed to figure it out immediately.

Once he'd had recovered from my verbal anxiety barrage, Matt wisely suggested that perhaps we needed to address all these concerns with the school, and then that we probably also needed to actually give our son the chance to start, to try it out, to see what happened. If it goes poorly, Matt said, then we'd make adjustments however we could — and maybe some of them would have to be the worst-case-scenario type I'd been conjuring in my head. But it's also entirely possible, he reminded me, that it would be OK, that he would enjoy school, and that he'd still get a lot out of it, even if he is still young, and even if he does need more time.

Why obsess over our infants' milestones when we can't really do anything to control them?

"He cannot possibly be the first premature baby born in December who wasn't ready for kindergarten," Matt reminded me.

I did meet with the school again after that, and once more, they were totally understanding and accommodating. It made me feel much better about the fact that we were still sending him despite feeling so unsure, and it gave me peace of mind that they wanted Reid to succeed and enjoy school as much as I did. But I still couldn't help but wonder if it wouldn't still have been a better idea to hold him back completely like I'd originally planned.

As new moms, we're often told that babies have their own schedules, that there's no value in comparing one baby's milestones to another. Sure, maybe there are average ages at which most babies do things like crawl, or walk, or talk, but even those averages fall within pretty broad ranges. A baby who reaches his or her milestones "early" or "late" isn't necessarily ahead or behind, it's just how it is. Why obsess over our infants' milestones when we can't really do anything to control them?

I'd honestly thought that I'd learned that lesson pretty well when my children were babies. But now, as preschoolers, I'm reminded that it's still true. Even without the very real challenges presented by things like a late birthday and by extreme prematurity, children have their own timelines, and some of them progress slower than others. I want so badly to be able to trust my son's schedule, to trust that he just needs more time (and that he has the right to take it), but by agreeing to send him to school, I might've prevented him from doing that. And I have no idea at all if that was the right decision to make.