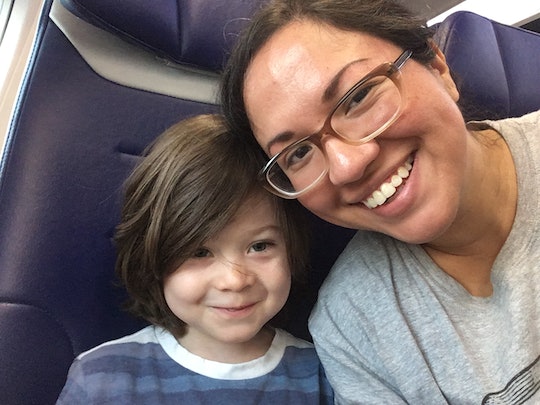 No, My Rainbow Baby Didn't Replace The Baby I Lost

When I lost my baby I felt my heart shatter into a million little pieces. The pain was unbearable, and for a long, long time I wondered if I would ever fully heal or experience an ounce of joy again. I did, eventually, but it was a long process. And even though I wound up pregnant after I lost my child, getting pregnant didn't automatically "fix" everything. Contrary to popular belief, or perhaps even the most well-intentioned of wishes, having a rainbow baby didn't replace the baby I lost. Not by a long shot.

A rainbow baby, for those who haven’t had the displeasure of losing a child, is the baby you have after experiencing a loss. They are the rainbow after the storm; the shining light after you’ve tumbled into overwhelming darkness. A rainbow pregnancy might help you come out of your grief momentarily, and it might help you gain some perspective when you're drowning in grief and self-loathing. It might remind you that not everything is terrible, that the world hasn’t ended because you can no longer hold your other child. But it will not make the hurt disappear. It will not erase the pain you've already experienced.

Trust me, I would know.

I lost my firstborn — my daughter — to prematurity. Six months after she passed I found out I was pregnant with my son, and while I was excited I was also anxious and depressed. Was I dishonoring the memory of my first baby by "moving forward" with my life and another pregnancy? Was I having another baby "too soon"? Was I ready? Because while people around me might have assumed that I was pushing past the pain and focusing solely on my new baby, I wasn't. I couldn't.

In no way did becoming pregnant again make things easier. In fact, at times it felt like it made everything feel impossibly overwhelming.

Much like a parent continues to love their first child after their second child is born, a bereaved mom keeps just as much love in her heart for the baby they lost as she does for the baby she is able to raise. When I found out I was going to have another baby I knew, before I even met him, that I would love both of my children equally. I just wasn't going to have both of them home with me.

Missing a baby while you plan for the arrival of another isn't easy. I think my pregnancy made it easy for a lot of people to forget about the loss I had endured, especially because people don't like to dwell on difficult memories. I had a pregnancy and another birth to look forward to and, for them, that was much easier to focus on. It wasn't that easy for me, though, and my loss didn't disappear just because I was planning for another labor and delivery. Losing my baby happened, and it’s something that I wanted to remind people of. I needed people to remember my daughter, too.

My second pregnancy was a complicated one, too. And because I was high-risk I was constantly on-edge, afraid my second baby would come into the world prematurely, the way his sister did. I needed him to be OK, in ways I'm not entirely sure I understood at the time. So while it would've been easy for people to assume my second baby was some kind of "replacement baby," I was a giant bundle of nerves; anxious and worried and afraid to hope for the best. In no way did becoming pregnant again make things easier. In fact, at times it felt like it made everything feel impossibly overwhelming.

The time my daughter spent on earth made me appreciate the preciousness of life, and showed me how much more my heart could grow... even when it was breaking.

Every day I thought about my daughter. Every day I had to face the heartbreaking realization that I would never get to see her grow up. I thought about my daughter as my belly grew and my son developed inside of me, and I could feel my daughter's imprint in my heart when I held my son for the very first time. She was there with me the day I brought him home from the hospital, and after spending two frightening months in the NICU. She was there during those first few sleepless months, and during every lullaby, every diaper change, every bath time, every book read, and every snuggle.

So no, my son did not — and never could — replace my daughter. My rainbow baby did not make me forget, or stop caring about my first child. If anything, my daughter taught me how to love my son even more deeply. The time my daughter spent on earth made me appreciate the preciousness of life, and showed me how much more my heart could grow... even when it was breaking.

There is no limit to the love we have as parents, and with every child — from the ones we bring home to the ones we don't, the ones we raise and the ones we say goodbye to way too early — our heart grows. Like our bellies we stretch to carry our love and admiration for the little hearts we heard beating inside our bodies. And we never, ever, forget them.