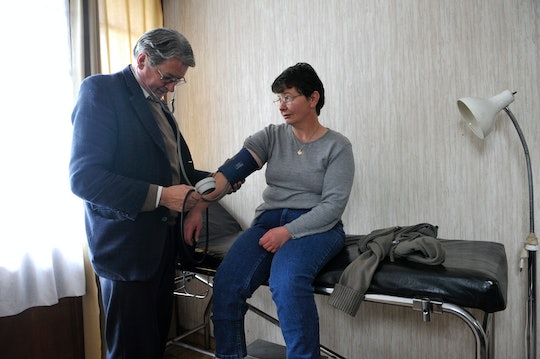 Normal Flu Symptoms You Can Confuse For Zika Symptoms

As people continue to adjust their travel plans due to fear of contracting the Zika virus, many may be wondering how to accurately identify its symptoms, and how to distinguish them from other common cold and flu symptoms. Over the past year, public health officials have uncovered more information on the serious health risks associated with the virus, so it's important to be aware of its symptoms – especially if you've traveled to a country where mosquito-borne transmissions of the virus have been reported. Alternatively, it's also good to know if your symptoms are caused by a cold or flu and are not associated with Zika. So, here are the normal flu symptoms you can confuse for Zika symptoms.

According to the CDC, common flu symptoms include fever or chills, cough, sore throat, runny or stuffy nose, muscle or body aches, headaches, fatigue, and, in some cases, diarrhea and vomiting. The flu can range from mild to severe and can cause illness or death. People with the flu can have some or all of the symptoms listed above, the CDC reported.

As for cold symptoms, they include sore throat, runny nose, sneezing, coughing, watery eyes, headaches, and body aches. And while the Zika virus and its reported health risks — especially for newborns, in whom it can cause microcephaly and other birth defects – is vastly different than the flu or cold, there appears to be some overlap in symptoms.

The common symptoms associated with the Zika virus include, fever, rash, joint pain, and conjunctivitis, according to the CDC. Other associated symptoms include muscle pain and headache. But the CDC noted that most people infected with Zika won't even know it.

Most people infected with Zika virus won’t even know they have the disease because they won’t have symptoms.

Although some symptoms of Zika and the flu or common cold overlap, like fever, headache, and muscle pain, a World Health Organization report explained that the symptoms work differently among the illnesses.

According to the WHO report, fever, and muscle and joint pain are the most common underlying similarities between the Zika virus and the flu. But the flu typically causes an onset of high fever and muscle pain – whereas Zika symptoms (if any) are typically mild, with low fever and mild muscle and joint pain. Additionally, the symptoms in Zika would likely occur days after a person has been infected, as opposed to the flu's onset of symptoms, WHO reported.

If you are concerned about Zika, and especially if you've traveled to an area where Zika has been found, the CDC recommends visiting a doctor who may order blood tests to look for Zika or other similar viruses. Zika is primarily transmitted through mosquito bites, but can be transmitted in pregnancy and through sexual intercourse. Read more information on Zika, prevention tips, and its symptoms and health risks here.