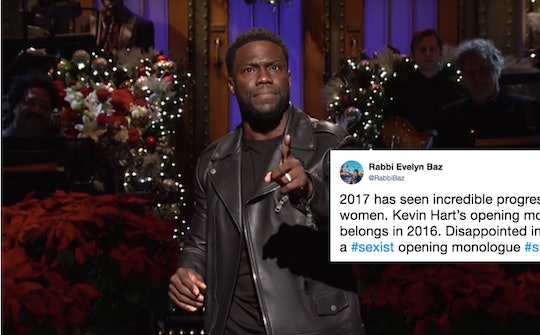 Part of being a comedian is knowing that some people are going to be offended now and again by your jokes, and no one knows that more than Kevin Hart after his Saturday Night Live monologue this week. During the opening segment on SNL, Hart spoke mainly about his new baby, born in late November, with wife Eniko Parrish and the perils of parenting. But his bit about gender roles and parenting fell totally flat and made a lot of people rightfully upset on social media. Romper's request for comment from Hart's rep regarding the backlash was not immediately returned.

Hart started the bit by applauding his wife, and women in general, for taking on the majority of the "important" things in childrearing. Not the most modern thing to say, but not the worst thing, right? He said:

You [women] do so much. I tip my hat off to you. When it comes to putting structure in a child's life, bathing them, feeding them, taking them to school, from school, you guys do that, you're responsible for that and I applaud you for that.

This is where it took a tone deaf turn. Sadly, on live television, there was no way anyone could stop him, either. Hart dropped the sexist bomb right there, saying, "But one thing you're not: Fun!" Cue the groans, right? He added, "You never heard a kid say, "I cant wait to get home and play with my mom." Hart elaborated about how hard it is to be a dad, since "all of the fun responsibility falls on the father's shoulder."

The bit carried on about how being "fun" is a full-time job, since the dad has to be "on" all the time and down to play with the kids, who just have too much energy. Then Hart jumped in a time machine and went straight to the 1950s, describing a scene in which a dad comes home, wary from work, and slowly opens his front door, only to see the kid waiting there for him to start the "fun," presumably before the wife comes out and ruins everything by being the killjoy who tells them to stop rolling around on the floor and to go wash up for dinner.

Hart ends the bit by joking that sometimes the dad pulls back out of the driveway when he sees the kid because he's too tired to play. Ugh, the whole joke was multiple levels of tired and traditionally sexist.

Others defended Hart, claiming that it was just a joke and that people were being too serious. Others actually thought it was reverse sexism — since all Hart was saying was that being a dad is a "hard job."

But it's not just a joke. It's actually sort of scary that we're still talking like this in 2017. According to a 2017 study from Harvard University, women actually still do most of the childrearing in the family — the "responsible stuff" — even when they, too, pull up into the driveway after a long hard work day. Just like a man does.

That women can't be "fun" is another sexist trope, along the lines of "women aren't funny," which is so, so old. Also, how many families out there are being led by same sex parents or people that don't identify with a gender at all? Who's the "fun" one then?

It feels like most people are trying to move towards a place where kids are raised without being placed in some gendered box for their entire lives, and here's a renowned comic, on national television, talking about the oldest, sexist tropes in the book. It wasn't offensive as much as it was boring and tone deaf.

This is not new for Hart, who has made jokes in the past about not wanting to "babysit" his kids alone. At the premiere of his new Jumanji movie this week, he also said that he doesn't "do" diapers, though he did on his older kids.

“Oh, no. Not on my new baby. Not on Kenzo — on my older babies I did and I had tough times doing it,” the actor admitted about diaper duty, according to People, adding:

With a newborn it’s very tough, they’re fragile, they need a mother’s touch; that’s not a father’s time, so I said, "Don’t tag me in 'til me and the baby are on terms of ‘Stop!’ and he can listen to that." I don’t want to deal with that new, new [baby stuff].

He defended himself on Twitter when people reacted to his "joke," saying that he meant it in jest. Every family reserves the right to split the parenting duties as they wish, and it's wrong to judge Hart and his wife for how they run their household. But given Hart's history of making jokes about a "man's place" when it comes to kids, it's fair that people assume Hart, and his fans, actually believe this stuff.

Hey, it's a free country. But let him tell his unoriginal sexist jokes to paying fans at some theater on his tour. Because the rest of us are ready for a change when it comes to gendered parenting roles, and monologues like this do way more harm than good.