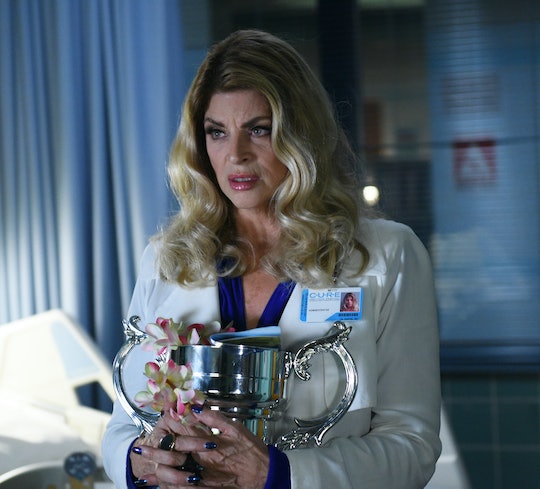 Until now, Nurse Hoffel on Scream Queens has been a thorn in Chanel's side, but not someone to really worry about, as she hoarded prescription drugs and tossed out seemingly empty threats. But now that Nurse Hoffel's backstory was revealed on Scream Queens, linking her to Season 1 and giving her motive despite her claims that she's not a killer, she's suddenly a lot more interesting. Tuesday's episode of Scream Queens began with Nurse Hoffel revealing her motive for accepting a job at the C.U.R.E. Institute and no, it wasn't just to work with two incredibly hot doctors and dodge serial killers. Instead, Hoffel's reason for working at the hospital was so that she could be close to the Chanels to get revenge for her sister, Agathat Bean, who was the maid for the Chanels at their sorority during Season 1 of Scream Queens.

Before you get excited that the promised reveal of a Green Meanie killer is Hoffel, she followed up her story by saying that despite her need to get revenge on the Chanels, she's not a killer. Still, Hoffel's backstory on Scream Queens proves that not only is a serial killer out to kill the Chanels, but now they have another official enemy in Nurse Hoffel.

If you remember, Agatha Bean from Season 1 was killed in the deep fryer in the kitchen of Kappa Kappa Tau when Chanel pushed her face into the grease. This was all because of the rumor that Agatha had supposedly had a hate collage of Chanel in her bedroom. But even if that were true, you can't really blame the maid, as Chanel had treated her horribly up until her death.

As a result, Hoffel is after revenge for her sister's death and plans to take the Chanels down, though apparently not by killing them. Still, this new revelation probably means that should the opportunity arise, Hoffel won't hesitate to team up with the killer or killers to help them.

At this point, Hoffel's backstory on Scream Queens makes her the perfect suspect as the Green Meanie, but she shut that down right away when she announced that she isn't a killer. But now that viewers know why she's working at the hospital and why she has it out for the Chanels (other than the fact that they're awful), the three original Chanels might be brought down by someone other than the Green Meanie in the end.