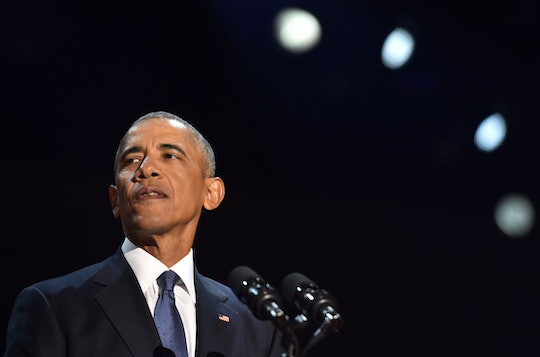 Just like so many of President Barack Obama’s speeches and comments over his past eight years in the White House, his final remarks on Tuesday night were full of even more memorable moments that will also go down in history — and in this age of the internet, we can remember them forever. Thankfully, the keen eyes and creative minds of social media did what they do best to prove just how much we’re going to miss him with these amazing Obama farewell speech memes and tweets.

People watching Obama's final address on Tuesday night perhaps weren't as prepared as they thought they might have been before it started. For example, Obama touched on tense race relations that still continue to plague the United States, quoting Atticus Finch from To Kill A Mockingbird to call out the racial divide.

Then, he made everyone collectively swoon when he gave the sweetest shoutout to his wife Michelle Obama, calling her by her full name and a "girl from the south side." Emotionally addressing the first lady, a teary-eyed Obama said, "For the past 25 years, you’ve been not only my wife and mother of my children, but you've been my best friend... you have made me proud, and you have made the country proud."

The point is, it was emotional, it was memorable, and these amazing tweets and memes prove just how much we're going to miss Obama when he leaves the Oval Office in just a matter of days.

It's hard to simply sum up the legacy Obama's presidency has left with so many, but these amazing (and hilarious) memes certainly help cope with the looming final days we have left with him in the White House.