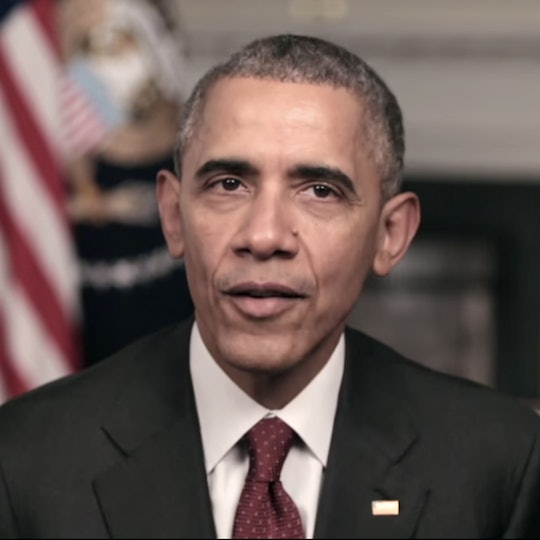 On Thursday in his weekly address, President Obama shared a Thanksgiving message with the nation. Obama traced the origins of the Thanksgiving holiday from the Pilgrims' first winter in 1620 up through our modern celebrations of food, festivities, and even football. America's refugee debate is an unavoidable topic around Thanksgiving tables today, and President Obama didn't shy away from the subject either in his Thanksgiving address to the nation. The President spoke candidly about his own personal gratitude to those Americans who have shown immense compassion and welcome to refugees:

On this uniquely American holiday, we also remember that so much of our greatness comes from our generosity. ...recognizing that in the holiday season, what you give is as important as what you get. ...And I've been touched by the generosity of the Americans who've written me letters and emails in recent weeks, offering to open their homes to refugees fleeing the brutality of ISIL.

Obama's Thursday address echoes sentiments expressed about welcoming refugees during Obama's joint press conference with French President François Hollande on Tuesday. Obama invoked the words of the Emma Lazarus poem at the base of the Statue of Liberty:

Obama's brief Thanksgiving address circled back to its very first point as the President noted that "the world is full of pilgrims," reminding Americans that our country's greatness lies in its ability to offer pilgrims of all kinds the chance for a "safer, better future."

Watch the President's address below:

And you can read the full transcript of Obama's Thanksgiving Day address on the White House's website.