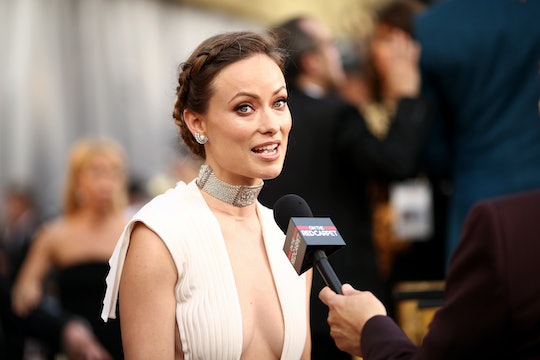 Throughout the 2016 presidential election and the past year, Olivia Wilde has been more and more vocal about her political opinions on social media, just like the rest of us. There's a lot to talk about with the new administration and with every other news cycle, there are increasingly more groups of people whose rights are in danger. Immigrants, the LGBTQ community, and women especially. It feels like there's literally no time to stop resisting, which is why it's not all that surprising that Wilde's birthday message to her daughter was all about feminism and fighting for her rights.

Wilde's daughter Daisy just had her first birthday on Wednesday, which was, incidentally, International Day of the Girl, an international holiday created by the United Nations to celebrate and empower young women all over the world. What a cool birthday date, right? If you have to be born on a holiday, a super feminist one is probably the way to go. Anyway, Wilde took the day to empower her own little girl on Instagram with a super sweet message. She wrote to her "curious, courageous" daughter:

We've taken some hits recently, but I believe we are even more determined because of it. We dream of a time when you won't have to apologize for your brilliance, or sacrifice your self-respect to prove your worthiness.

With a support system like Wilde and Jason Sudeikis behind her, Daisy is bound to accomplish big things. Ya know, after she's potty trained and all.

Wilde, 33 years old, is also mom to 3-year-old Otis, which means she's obviously a crazy busy, working mom. A toddler and an infant are no joke. Yet between empowering both of her kids and working, she dedicates a lot of time to raising awareness about important issues. On Wednesday, she also posted a reminder to all of her followers that she believes that everyone deserves quality health care.

She posted an image of herself at Mount Sinai Hospital in New York City giving someone the middle finger as she goes into labor. Wilde captioned the photo:

A year ago, today, juuuuust as the drugs kicked in. Daisy's birth was a little bit complicated and I'm deeply grateful for Sharlene Pope, Dr Caitlin Fiss, Nurse Helen O'Keeffe, and the whole life-saving team at Mount Sinai hospital in Manhattan. Together we pushed out a gorgeous almost 10 lb baby lady. Let's hear it for modern medicine. It shouldn't be reserved for the lucky few. Happy birthday, Daisy girl!

Wilde also apparently has a pretty empowering partner, too. Sudeikis told People just after Daisy's birth that he's glad his daughter has an amazing, feminist role model in her mom. He self-identifies as a feminist, too — though he also just thinks that's makes him "normal." (Spoiler alert: He's right.) But he knows that men don't have to have women in their lives to treat them like human beings. Sudeikis told People:

I don’t think, it doesn’t make me any more decent because I had a daughter. I was lucky to get there ahead of her introduction to the world, and I hope to maintain that and stay on her good side for as long as I can.

Please insert prayer emoji hands here — the world could use more level-headed, empowering role models like Wilde and Sudeikis in the world. Especially in the current media, where misogyny and mom-shaming have a tendency to run rampant.

For example, earlier this week, Wilde posted a cute picture of her kissing her son on the lips in the bathroom and was immediately called out by mommy trolls. Some suggested that she might get (or give?) her son herpes by kissing him on the lips, while others assumed she was sexualizing him. Like a true champ, Wilde hasn't wasted any energy on the trolls and has just let the haters hate.

Who has the time for all that when there are first birthdays to celebrate and cute kids to raise anyway?