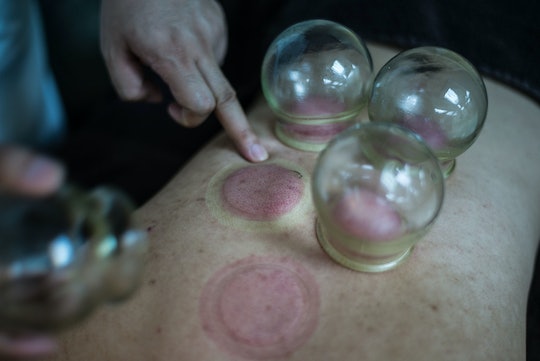 This Common Treatment For Olympians *Might* Be Great For Breastfeeding Moms, Too

When Olympic athletes like swimmer Michael Phelps, and celebrities like Gwyneth Paltrow, turned to cupping — a form of traditional Chinese medicine — while simultaneously, and proudly, claiming it helps with pain and healing, the therapy grew exponentially in its popularity. And now, as the 2018 Winter Olympics approach, that popularity has expanded to breastfeeding moms. Yes, some practitioners believe that cupping might help moms with breastfeeding problems, like undersupply and milk ejection issues. And as a mom with undersupply, I can tell you that I was willing to try pretty much anything to increase my supply. But if you are thinking about trying cupping to help with breastfeeding, you might want to consider a few things first.

According to Edzard Ernst, Emeritus Professor of Complementary Medicine at the University of Exeter, cupping is a therapy in which a practitioner of Traditional Chinese Medicine applies heated cups to your body. The sometimes-hard-to-look-at marks caused by cupping are actually bruises. This particular method of medicine is theorized to help with pain and other medical problems by impacting the energy in your body or qi. According to a case study published in the Journal of Chinese Medicine, it is believed that after childbirth, new moms have low levels of qi, which can result in difficulties breastfeeding. The patient in their study saw some positive results from cupping, but there's not enough research to show that cupping actually works to increase milk supply. In fact, it might be dangerous for new moms.

According to Edzard Ernst, Emeritus Professor of Complementary Medicine at the University of Exeter and cupping practitioner, cupping is a technique used in Traditional Chinese Medicine where the provider will literally apply heated cups to your body — hence the name cupping. As the cups cool, they create a vacuum drawing your skin and muscles into the cup and leaving a bruise. As Ernst tells theconversation.com, "Cupping has long existed in many cultures including China, ostensibly to stimulate the flow of energy in the body." He adds that while the marks look pretty painful, the treatment is painless.

A 2015 systemic review of the available research related to cupping found that while some studies show that it helps for things like acne and pain, because the studies about cupping weren't well-designed scientists can't really draw conclusions about whether or not it actually works. As Ernst told theconversation.com, he still thinks that cupping works, but it might be actually an example of the patient believing that it works, or feeling less pain from their injury because of pain caused by cupping. Yikes.

So, could cupping help breastfeeding moms? One case study published in the Journal of Chinese Medicine reported that a patient who received a course of cupping treatment for her low milk supply reported that her supply did increase after the two weeks of treatment, but that after those two weeks she needed to start supplementing with formula. Also, the authors' search of available research resulted in no actual studies showing that cupping can impact lactation or milk supply, so her experience may have been an example of correlation, not causation.

But even if it does work, it's important to consider the safety aspect of the treatment itself. The Hijama Clinic in the U.K., which provides cupping treatment and certification courses for practitioners, advises that new moms wait at least 40 days after giving birth to start cupping therapy. And according to the International Cupping Therapy Association, breastfeeding moms who want to start cupping actually need to "pump and dump" for a few days after each treatment session, because of potential toxins the treatment can release into your breast milk. So, again, these warnings calls into question the safety of the practice for you and your baby.

If you are having trouble breastfeeding, the Fed is Best Foundation advises that you talk to your physician before trying any treatment. While it can be difficult to keep yourself from trying everything and anything to boost your supply, there's not a lot of research available about lactation, and most of it shows that popular milk supply remedies don't actually work. And while it can be tempting to buy into the latest trends in alternative medicine, especially when endorsed by professional athletes, your health and your baby's health are totally not worth the risk.