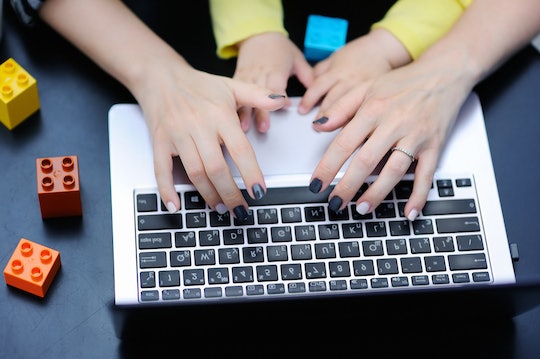 Most of the time, parents, especially women, are asked to make an impossible choice. Raise their kids or have a career. Or try to do both and face shame and guilt at every turn. While more paid parental leave policies and affordable child care mandates could help ameliorate this "rock and a hard place" type of situation, why not push it a little further? Like this new mom who's bringing her baby on job interviews with her.

Yes, you heard that right. Meesha Chang is the mom to baby Lucia and has held roles at an executive level in the creative industry. And now, she's looking for a new gig — but she's coming with her baby, according to PopSugar. So far, she's listed little Lucia's qualifications on her resumé ("quiet, observant nature and positive attitude") and gone through two interviews, one via Skype and the other in-person, with her baby along, she told PopSugar in the same interview. The goal?

To find a company that's willing to allow her to bring her child to work with her, along with giving her space to let the kid sleep, play, and also breastfeed. Ideally, there would also be an on-site sitter or volunteer to take watch of the child while she attended meetings that the infant couldn't attend.

Her fiancé, John, is in the picture and would help her out, as she told PopSugar, but Chang is serious about bringing her daughter to work, every day. Sound crazy?

It's actually not. Chang told PopSugar that she understands that she's in a unique position to be searching for a job with her baby. Not all new moms are at a level where they can make demands while job hunting — many just need a job and are happy (or forced) to make accommodations for their children. But there's a movement underway to make babies-at-work programs a more accepted practice and it's actually pretty outstanding.

The Parenting in the Workplace Institute (PIWI), was founded in 2007 by Carla Moquin, and they've already helped implement programs at over 200 companies in the United States. PIWI helps a company do a test run and provides them with best practice guidelines to make a program like this work. "Once a pilot program is in place and companies see how well it works, it is extremely rare for a company not to move forward with a permanent policy," Moquin told PopSugar.

It's actually a win for the company, too. It costs way less to give parents a space for their child in the office than set up an on-site day care. It also means employees are at work longer, can stay later, and even return from parental leave sooner. Cara Chris, who works at the Arizona State Department of Health, which has an infants-at-work program, reportedly said that she returned to work after six weeks instead of taking her full 12-week policy. She said, "I’d wear her in a Moby wrap to meetings. She’d sleep in her Pack ‘n Play in my office,” according to MarketWatch.

As MarketWatch reported, there are rules that vary from company to company, of course, to make sure everyone's needs are met. Like asking parents to only change diapers in the restroom, or if the child is inconsolable to take them outside or home for the day. Some places, like the Washington State Department of Health, give program participants their own office and maintain a right to ask an employee to stop bringing their child to work if it's too much of a distraction.

This shouldn't get in the way of working towards a federal paid parental leave program or making child care affordable for families all over the country, but this is a pretty good option for companies. If only because it empowers parents, and women especially, in the work force. Instead of leaving their industry for decades or falling behind at the office because of their child care obligations, women can stay in the game.

What's more, if a woman works at a company that doesn't have an infants-at-work program but her husband does, then he can take the baby to work, cutting their child care costs and allowing both parents to thrive in their career.

The gender wage gap is, at its foundation, about motherhood. Women tend to drop out of the workforce to care for their families. Studies show that women are less likely to get up for promotions and raises because they're not 100 percent ingrained in their office culture when they're rushing to get their kids from daycare before they get charged for extra time or have to leave an pick up a sick kid.

Babies-at-work programs are worth it for everyone in the long run. And once more companies start to adapt these programs, the benefits will be all the more obvious.