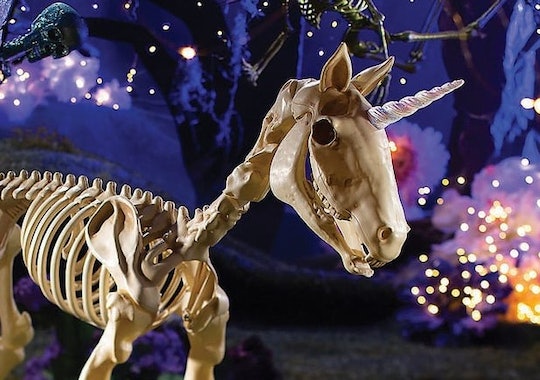 It’s the beginning of August, which means that everything fall and Halloween-related is already out in retail stores. And among the assorted pumpkins, scarecrows, and witch hats that you’ll find in stores and online, you might be surprised to spy a unique unicorn skeleton Halloween decoration from Oriental Trading that's creepy and cool at the same time.

Skeletons are standard fare when it comes to spooking people on All Hallows' Eve. The not-so-pretty animals (you know, like bats, rats, dragons, and vultures) are what you might expect a skeleton to look like. As such, they’re the decorations that you typically adorn your home with on Halloween. But a unicorn? They’re just so… pretty. With their shimmering bodies and beautiful, flowing manes, they’re the opposite of everything eerie and terrifying. Which is why a unicorn skeleton can be kind of jarring. Unicorns are supposed to be mystical, after all, not macabre.

But if you’re looking to shake things up this Halloween, the unicorn skeleton ($70) from Oriental Trading might just do the trick. Although it has a wooden look to it, it’s actually made from plastic. It measures 43” x 27”, which makes it a decent-sized height both as a decoration in your home and also to use for kids’ parties. And while unicorns are known for being every color of the rainbow, the only thing that’s colorful on this one is the horn, which is what sets it apart from looking like just a regular horse skeleton. With shiny blue and purple stripes, it's a stark contrast to the rest the unicorn's emaciated frame.

Of course, you could always dress up the unicorn skeleton to make it even more festive. I personally would style it with a rainbow mane or a fluffy tutu. To me, it feels like it needs something so that it really conveys that it was once a beautiful fabled horse. Perhaps the addition of another fantasy creature's bones would help, like this "life-size" mermaid skeleton (also available at Oriental Trading for $70).

Before you buy these skeletons, though (or really, any spooktacular Halloween decoration for that matter), you should make sure that it's kid-friendly. If you have a kid who loves unicorns (and really, who doesn’t?), it might be a scary sight to see this lovely creature looking all bony and brittle. Case in point: I have a skeleton door greeter that sings the Men At Work song, “Who Can It Be Now?” Although it makes my 80’s-loving soul so happy every time I hear that tenor sax intro, it freaks out my little ones every time he moves. So he’s been relegated to the attic until further notice (read: when my kids get older).

If you want your unicorn skeleton to do more than just decorate your entryway, you can always put it to work. That sparkly horn is just asking to be touched and played with, so I would make good use of it and buy some rings. That way, you could play a Halloween-themed ring toss game that would require participants to land the ring on the unicorn’s horn. Your little ghosts and goblins would have a ghoulishly good time with it, especially if you made some unicorn chip cookies for a post-game snack.

And if the sight of a unicorn skeleton leaves you (or your kids) feeling a little sad, look on the bright side. If there are unicorn skeletons, then that puts an end to the myth that unicorns don’t exist. Because if they weren’t real, would we have skeletons? I think not.

More Like This
The Cutest New Holiday Jellycats, From A Yule Log To A Santa Lobster
10 Baby’s First Christmas Outfits Cute Enough To Save For Their Kids
You'll Feel Like A Princess In These Gorgeous New Year's Eve Maternity Dresses
Thank-You Gifts For Garbage Collectors To Show You Care