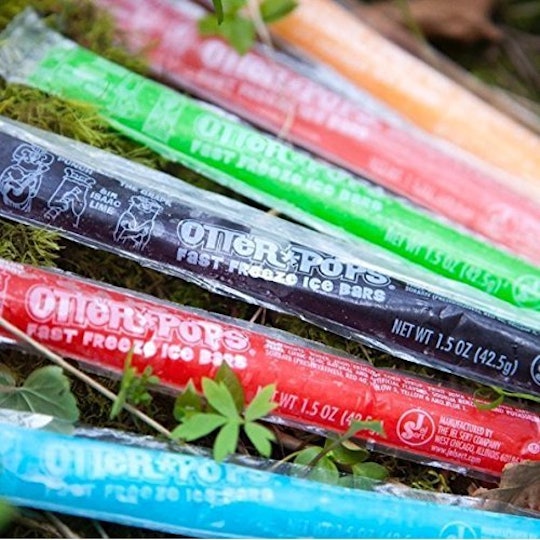 This Iconic Summer Treat Is Stirring Up A Passionate Debate

Maybe it's the long Memorial Day weekend or the anticipation of summer, but Twitter recently got into a debate over a popular summer treat. To sum up the drama, commenters can't agree whether the icy desserts — clear packaged tubes filled with artificially-flavored ice — are called Otter Pops or Freeze Pops. No matter where you might fall on this issue, there's a good chance the argument will make you feel nostalgic for the summers of your youth.

The Otter Pops versus Freeze Pops debate all started when one commenter took to Twitter on Saturday to ask a very important question. "It's dead summer. Your mom comes home from the store with THESE," they captioned a photo of the summery treat. "What do u call these and what is the best color?"

I'm not sure how popular these bad boys are today, but back in the 90s, they were big. Maybe it had something to do with the bang for your buck — you could buy a massive crate of these things for a reasonable price, a perfect solution for parents who might not be in the position to buy expensive ice cream containers, for instance.

Oh, and I did mention how fun the ice pops are to eat? By the time you get to the plastic tube's end, you're left with a few glorious slurps of artificial fruit flavors.

OK, I probably shouldn't get into food writing anytime soon, but I think there are plenty of millennials out there who understand what I'm getting at. These ice pops are the best.

Although many people can attest to the treat's greatness, there isn't one unanimous answer as to what it's called. Some commenters, for instance, claim that the ices are called Otter Pops.

"Otter pops, and blue you heathens," someone else joked.

The Otter Pops company even chimed in on the situation, writing: "We can confirm these are Otter Pops. And all flavors are the best."

Others, however, referred to the dessert as "freeze pops" or "freezies."

One commenter wrote: "Freeze pops & the purple ones are always superior."

But wait — that's not all. Some people refer to the treats as "Zooper Doopers." Say what?

One person poked fun at all of the different variations, tweeting:

Internet: What do you call these?

Of course, there's no "right" name here. Eater published a detailed and thorough article on the subject, titled, "The Past, Present, and Future of Freeze Pops," which highlighted how the pops are the essentially the same despite the different brand names.

Otter pops, for example, is a well-known brand because its "flavors are named after proprietary cartoon characters, including Alexander the Grape and Sir Isaac Lime," according to Eater.

Props to the writers at Otter Pops, by the way — I'm kind of obsessed with Alexander the Grape.

Name drama aside, I think many people can agree that this summer staple is pretty amazing, especially due to the nostalgia factor. So here's to Otter Pops and Freeze Pops, or whatever you might call them.