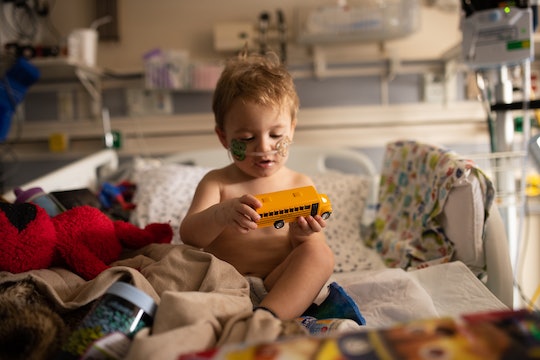 Panicking About Hygiene? For Medically Fragile Kids, This Is Everyday

As the mom of a child who is medically fragile and immunocompromised, I sometimes feel like the public-health police: from asking strangers not to touch my child's face to removing my daughter from events when other people show up sick to verifying that the people around my daughter have gotten their flu vaccine, I would like to see some ID, please. So you might think I'd be excited about all the press making basic hygiene new again (replete with soundtrack options for optimal hand-washing), courtesy of COVID-19.

Mostly I'm over here shaking my head about the bizarrely macabre obsession with this virus that has finally convinced people to think about washing their hands properly. I see this same frustration playing out as I scroll through my Facebook feed, laughing quietly as one after another of my mom-friends with medically fragile kids share Anil Dash's tweet — washing your hands to prevent community spread "doesn’t have to be a special occasion" thing, he points out. It feels as if we are waiting for some perverted live-to-air version of an apocalyptic thriller to erupt before our eyes, with a clear winner identified among those who have stockpiled the most hand sanitizer.

I suppose I am a bit extra sensitive to this issue as my daughter is currently fighting off a confirmed case of Influenza B. Despite low oxygen numbers and high temperatures, we've kept her out of the hospital with the help of Tamiflu, which was difficult to procure due to shortages (after announcements that it might work on the novel coronavirus), and, presumably, some support from the flu vaccine she received last year.

You might expect that the parents in the circles that I move in would be at the top of the list of people panicking about COVID-19. And, to a certain extent, sure, yes, we are. But, functionally, nothing is very different for us, because, also high on our list are all the other viruses — including domestic coronaviruses — that get passed around this time of year.

COVID-19 is not not a big deal. Obviously. And there is a whole lot about this virus that we don't understand yet. However, the common-sense rules of preventing the spread of this virus — namely, hand-washing, vampire-coughing, staying home if you are sick — these stand for every cold and flu season. It isn't so much the fixation on COVID-19 that troubles me; it is that the fixation reads more like entertainment than an actual ongoing and effective concern for public health.

Look at influenza: According to the CDC, an estimated 61,000 Americans died as a result of influenza during the 2017-2018 season. Worldwide, those numbers grow to 290,000-650,000 deaths from influenza annually. And yes, many of those deaths were among individuals with pre-existing medical challenges — in other words, people like my daughter. This reality, coupled with the risk of exposure to all manner of other nasty bugs, is part of what I weigh as I make a call about when to take her to the doctor, to the hospital.

People caring for vulnerable populations don't really have a ton of bandwidth to get extra excited about this virus. It all feels like just another Tuesday in winter.

Influenza isn't the only other virus I know by name: Two weeks earlier, my daughter was hospitalized for five days after a rather dramatic trip to the E.R. in Boston for Adenovirus. She's been hospitalized with Adenovirus before. Most of you reading this have likely had this virus, but would have no reason to know to differentiate it from any other virus that gave you some frustrating respiratory or GI symptoms.

People caring for vulnerable populations don't really have a ton of bandwidth to get extra excited about this virus. It all feels like just another Tuesday in winter. And while it is nice that so many other people are finally washing their hands, we are having trouble getting access to the supplies we need regularly to keep our children safe. Basic items like hand sanitizer (which we normally have to beg visitors to use) are now selling out as if disaster preparedness was rolled out for Fashion Week (ready-to-wear from Target for $5.99). The empty shelves have now prompted a "DIY hand-sanitizer" fix, which is also now very on-trend (Cliff's notes version: it's vodka. Personally, though, I prefer to turn to bourbon in a pandemic).

Now, I don't want to brag, but I have been into hand sanitizer since the NICU. I carried my own to the hospital each day, since the hospital's off-brand version gave me a rash. Bottles of hand sanitizer sit in every other room in my house where you might place your peonies, and have for the last nine years. You know what else we have? Soap. We have kept that in stock for years without emptying out the grocery store shelves.

Far be it for me to interrupt the excitement of everyone finally getting to show off what they learned watching 10 seasons of The Walking Dead, but I'm just going to suggest maybe we all back away a bit from the hoarding... and instead take a moment to think about the things that we can put our energy into to be supportive of public health. Yes, wipe down that grocery cart handle! Keep your kids home if they are sick. Keep track of the CDC recommendations (to wash your hands regularly).

Also, take some time to check in on a neighbor who might have difficulty getting out in the winter. Remember that public policy — like sick days for employees and paid family leave — affects the ability of some families to keep their germs home with them, rather than in schools and places of work.

And bank this experience so that when the next cold and flu season rolls around and you aren't terrified of a superbug that is all over the news coming to get you, you realize a lot of us still are fighting those battles — and we could use your help.

More Like This
Tips For Apple Picking With Kids
I’m Getting Dual Citizenship For My Jewish Children, Just In Case.
16 After-School Snacks For Hangry Kids
Experts Explain Whether It’s Safe For Your Baby To Sleep On Your Chest